I made two 10" tall 7-segment displays, using 3W red LEDS, 4 per segment. They are for outside (for my speed sign) and must be bright.

There are numerous ways to drive these things and I have the ICs to do it, DM13, TLC5940 and some more (BCD coded) on the way. I would like constant current and using one resistor to get it is best (so I can tweak it).

The DM13 has 16 outputs, and for two displays I need 14 outputs. Do you think it is possible to run both displays from one IC? I'll have external power, no problem, but I'm wondering about the coding. Two displays will be either off or both on (indicating speed), so I'll be filling the 16 bit buffer on chip all at once. Seems like it will work. (If no one can answer, I will test and get back to this forum).

Or should I go with two DM13? Seems like a waste of PC board since I will use only 8 o/ps from each.

I would like to use the SevSeg library, also...but that seems rather stupid since the DM13 et al are serial out devices. Maybe I could just go with 2803s and individual resistors for each segment. (Tested with these...work fine).

Any ideas? Will run with an UNO. 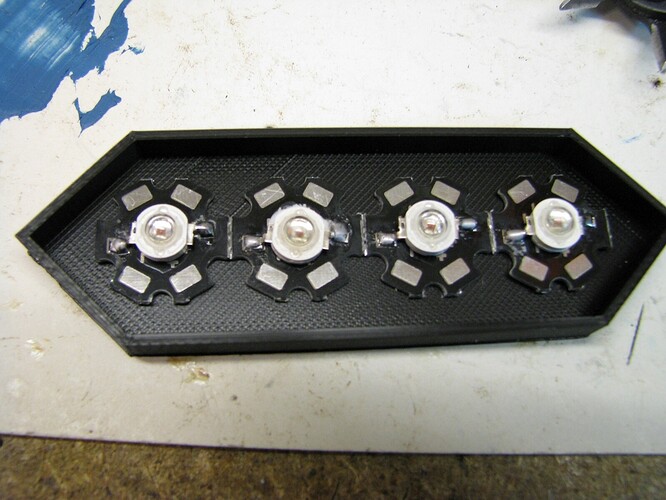 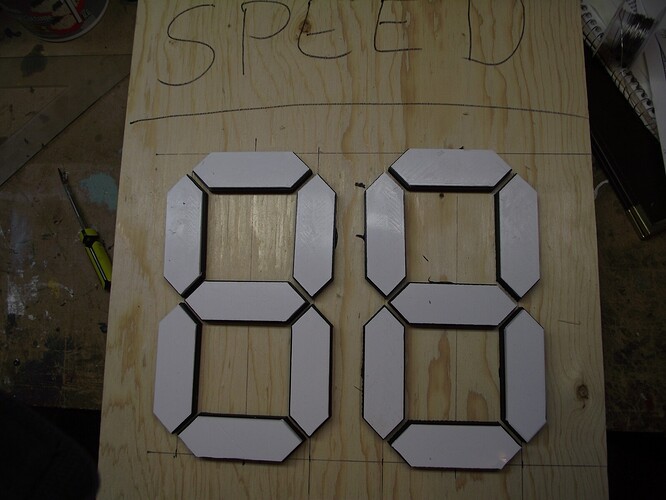 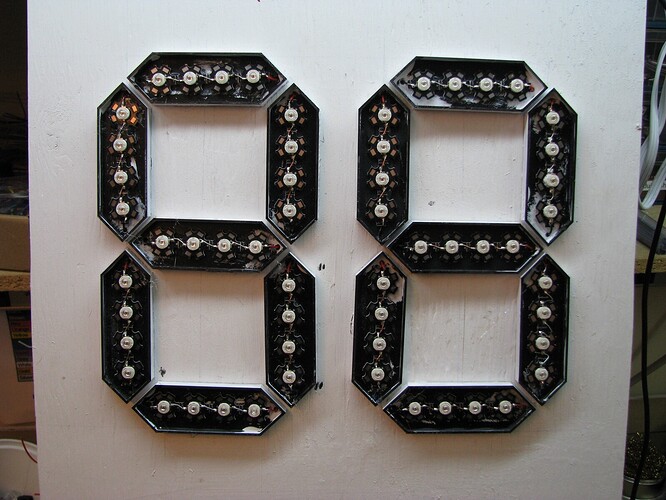 What's the current for each segment?

I'm thinking of TPIC6B595 shift registers. One per digit.

Each Led is 3W. You have a total of 56 Leds, all of which could be lit if you detect a speed of 88 mph/kph. That is 168W if you drive these at full capacity and then you would have other problems with heat dissipation etc., especially if there is a constant stream of traffic and the the sign is continuously illuminated.

You've wired the Leds for each segment in series ?
That DM13 device is described in the data sheet a "Low Power16-bitConstantCurrentLED Driver" so could be a bit delicate for what you are doing.

You may be able to spread the load between the two digits by a combination of PWM (pulse width modulation) and multiplexing and maybe a during darkness, it does not have to be so bright.

Maybe supply a data sheet for the Leds you are using.

100 ohm resistance in series with 4 of these LEDS at 12volts uses 20mA and are "quite bright".

I have white bezels to go over the LEDs and I'm sure I'll have to really increase the current. The DM13 is good for 60 mA and I have some chips good for 100mA. The LEDs have heat sinks and I don't anticipate the display being on for too long, like 10 seconds at a time, maybe.

I have a spreadsheet (uploaded as JPG) that shows luminosity vs resistor (hence current) values. If I use a display driver I get constant current and use ONE resistor. If I use 2803 Darlington drivers, I have to use one resistor/segment and if I'm wrong...have to swap them all out. I did use a resistor array for testing, but wasn't very bright (330 ohm array). 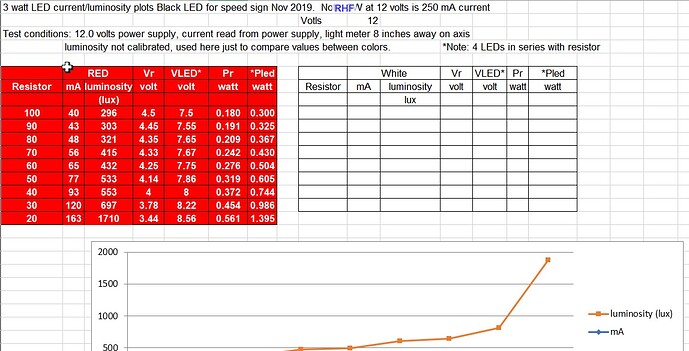 Does anyone else see the significance of 88 mph ?

If "2803s and individual resistors for each segment. (Tested with these...work fine)." is fine, then TPIC6B595 with same resistor per segment should be fine, and you only need 3 output pins (clock, data, latch), 4 if you want to use a PWM pin for OE/ to get brightness control.
I have a board with 12 shift registers, used 8 of them to control this display.
https://www.youtube.com/watch?v=6HZ0Mr51jUY

Is very simple to create your own output pin to segment mapping to shift into the '595 for turning on segments, you don't need a library.

“If My Calculations Are Correct, When This Baby Hits 88 Miles Per Hour, You're Gonna See Some Serious S***.”

CrossRoads:
“If My Calculations Are Correct, When This Baby Hits 88 Miles Per Hour, You're Gonna See Some Serious S***.”

queenidog:
100 ohm resistance in series with 4 of these LEDS at 12volts uses 20mA and are "quite bright".

That's be about 60 mW per LED. A far cry from the 3W you mentioned before, which would imply about 1A per series of segments. Even at 100 mA you're at just about 300 mW per LED.
I'm assuming a voltage drop of about 3V per LED here.
Of course bright enough is bright enough, so up to you whether you have to increase that current or not.

Test the display with full sun shining on it. I'll bet that 20 mA per segment will be less than "quite bright".

Two of these boards could do.
They already have one (15 ohm) resistor per segment fitted, good for ~100-120mA per segment on a 12volt regulated supply with four RED LEDs in series.
Leo..

The speed limit on this hiil, with curve and blind access roads (eg my driveway) is 40 kph, or about 25 miles per hour. The entire road is very busy in summer with tourists who generally follow the speed limit since they are unaware of dangers lurking in the corners. 88 mph is 141 kph, every tourist would be dead at that speed... In other words, won't happen.

Since I'm in Canada speed will be shown in kph, maximum about 60 kph (motorcycles 80kph 'cause they are crazy kamikaze drivers).

The LEDs are RATED for 3W, I won't be necessarily driving them at that level. If you look at my spreadsheet you can see that luminosity is 6x more at 10 ohm resistance (163 mA) than at 40 ma (100 ohm resistor). I can tell you that it is so bright, it's like looking in a laser beam!!

I have similar LEDs (RGB) in a Christmas Display that can be adequately seen 300 feet away (across from our cove), and they are only using 40 mA. In that case I'm using 2803 (actually 2981 current sink equivalent) with 100 ohm resistors on EACH of the 128 pixels.

That works fine for night time...but the speed sign has to work in sunlight...so 100 ohm won't be enough. I think I'll go this route with resistors...only need 14 of them. I'll make a board so I can swap out resistor values quickly and easily. Or I could put a transistor driver to increase current throughput.

Post#1
Two TPIC6B595 with resistors, or the boards I linked to (same chip/family).
Stay away from the ULN2803.
The TPIC family, with mosfets, has a more predictable LED current and runs cooler than the darlington based 2803 family.
And, 3 pins vs. 14 pins of the Arduino.
The page I linked to has a link to an example sketch for two digits.
Leo..

Just curious- how are you going to measure the speed?

When building it into a display you normally won't be looking at the LEDs directly, but through a diffuser. You may lose 40% of your brightness there. Keep that in mind.

I'm using Doppler radar module. I actually tested it for my other project (car counter) where a disturbance in the field would generate a pulse back that I could measure: but NOT for speed, just for "something just crossed your driveway". Instead I'm using a laser to bounce across the road, so that frees up my radar module for my speed sign.

queenidog:
Instead I'm using a laser to bounce across the road, so that frees up my radar module for my speed sign.

Sounds dangerous to dogs, cats, and babies.
A common infrared LED with 3-pin sensor could be a lot safer, and easier to use (no accurate aiming needed).
A setup like that also effectively has a small diameter (~5mm) 'beam', and 50 meters is not a problem.
Leo..

Thanks guys. I've tried numerous LED versions but none seemed to have the range I want and this was testing in my shop...not even outside in the sunlight. I've also tried a few ultrasonic, with same issues (except sunlight is not a problem).

I'd rather NOT use a laser but will if I have to...I can control it. Class III "domestic" lasers are only dangerous if you stare into them...not likely to happen on a busy highway. I could install a "mammal detector" to disable the laser if it detects any warm-blooded creature. I will be walking my dog past this device 5-6 times/day so of course I'll be sure she's safe.

I did more tests. 10 ohm, 5 watt resistors at 12 volts is just perfect, very bright. Sign only has to be on for viewing when speed is exceeded, maybe 10 seconds at a time. I only need 7 resistors because the segments are wired in parallel. I haven't quite decided what the covers will be. I'm currently using 3D printed while PLA covers that work, but I found clear lenticular fluorescent light covers distribute the light better. Still have 5 months to go before it's "required".