I have a breadboard 328p project that's been running for a couple years with the following peripherals:

I plan to upgrade it to include the following:

I've done some reading on the 1284p and know about:

Also, does anyone have any experience using the 1284p with the other libraries: Adafruit TFT, Chronodot, LiquidTWI2, RS485_protocol?

I'm open to other suggestions and comments, too.

I don't think that there should be a problem to use 1284P. Yes, there are some differences but nothing which couldn't solved. Look at my clone here Another Arduino clone with 1284P - Microcontrollers - Arduino Forum. It is UNO like. Most important thing is how the pins are mapped. There are several pin mapping variants beside of mine: Mighty, Bobuino... All things you mentioned work without problems and in a case of problems with the library compatibility you can modify library and I'm sure that there are people whose are prepared to help.
So, go for it!

y can't u use 2560 breakout and burn boot loader at

The site you reference that discusses the SD library issue was last updated ~2 years ago, it may be out of date now.

I'm pretty sure Crossroads sells a 1284p board that has an SD card slot on it, so that makes me think that there's a working SD card library....

Honestly, I'm baffled as to how that could have been considered a significant road block - the SPI peripherals on the two chips are identical, so short of changing a few pin assignments, I'm not sure how there could be a problem making the SD library work...

The same pretty much goes for other libraries - all that might be different is pin assignments, and often you don't even need to do that (on AVRs, when you tell it to use a peripheral, it automatically takes over the appropriate pin, without the code needing to know which pin that is) 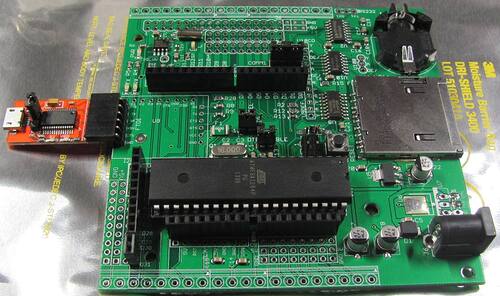 The original post and topic subject was asking about the 1248p over and over again including in the title.
But then points to a link about the 1284.
I assume this is a Dyslexic typo?

In terms of something with extra room that is "cheap". Can you really build something with a 1284 cheaper than some of the Teensy boards? Especially if you don't have any of the other required parts needed in your tool box and are looking at a single unit?

Teensy LC being under $12
48Mhx,62k flash, 8k of ram.
It is ARM based rather than AVR, but Paul has great library support for his products.
It can be programmed using the Team Arduino IDE with the teensy addon.

If you really want a cheap chip, and you have a few parts in your toolbox you could look at the pic32 DIP based chips.
Something like the PIC32MX250F128B (just under $4 quantity 1)
You get a chip that is 28 pin dip that runs at 40Mhz, has 128k of flash and 32k of RAM.
http://chipkit.net/diy-chipkit-board/

The draw back is that you will need to use MPIDE rather than Team Arduino's IDE for programming and you might run into a few library issues (most libraries will just work, but you might run into some that might need some slight tweaking)

Thanks to everyone for their comments!

If you need to modify any of the libraries here are some Arduino libraries made compatible with ATmega1284P that may help you see what changes need to be made: mighty-1284p/avr/libraries at v1.6.3 · JChristensen/mighty-1284p · GitHub

For example, just taking a quick look at the Adafruit TFT library it seems like it might need ATmega1284P defines added to TFTLCD-Library/pin_magic.h at master · adafruit/TFTLCD-Library · GitHub

Did you do it? I'm trying to configure the adafruit tft lcd libary for atmega1284p at the moment but i'm having trouble