I have an automatic door opener/closer that uses a car window motor, 12v car battery, 2 stop sensors (just mechanical switches) arduino uno with a motor controller shield running 2 relays. It is currently, at random times, drawing a lot of current - more than 40A - for 1-2 seconds, and draining the battery.

It worked for about 3 years. Lately I added a temperature sensor so it didn't open if it was cold - in this process I managed to break a bunch of connections, some others came unplugged, there were some programming issues, all involving a lot of debugging and many times that the motor went the wrong direction and stalled until it timed out at 4 seconds. Now it works, except for the random high current draw. I don't have a digital scope, but it was pulling more than 40A, it happened once when I had the multimeter connected. Other times I know it's happened only because the battery is low. We also just changed to a smaller battery, so it could have been happening before and we didn't know because the battery could handle it.

I had two thoughts on the problem:
-maybe I've killed the motor somehow. But I haven't seen it happen when the motor is running, not sure if it has or hasn't.
-maybe the relays have gone weird. The inrush current for when the motor starts is about 40A, steady state when moving is 7A, and the relays are only rated for 10A and 120AC. They're about 20 years old, I think, I used them for a robot project as a kid.
-maybe something is wrong with the arduino?
-maybe some connection/wire crossed/mechanical thing? I can't make it happen when I shake the box around.

Any ideas? Other than just rebuilding the whole thing with new parts and properly rated relays, how can I fix the problem?

Please read the first post in any forum entitled how to use this forum.
http://forum.arduino.cc/index.php/topic,148850.0.html

Sounds like you didn't make a circuit diagram when you first installed?
Where is your fuse to protect your battery, motor and circuit from possible FIRE?

Make a diagram NOW, and post it so we can see if you have any wiring problems.

If you disconnect the door from the motor, does running the motor on its own produce the same fault.

Maybe the UP relay is welded closed and when the DN relay pulls in you have a "shoot through" condition (direct short). Or is it possible for UP and DN to pull in at the same time, if only for a few milli seconds?

The circuit diagram is hopefully attached.

As you mentioned, there is no fuse protection. I tried searching and I can't find fuse information that would allow an inrush current around 40A but protect from higher peaks. I did try to figure out what cars use for their window fuses, and it seems they use automatic resetting circuit breaker type fuses since they blow so frequently. They also might have all 4 windows connected to the same fuse. 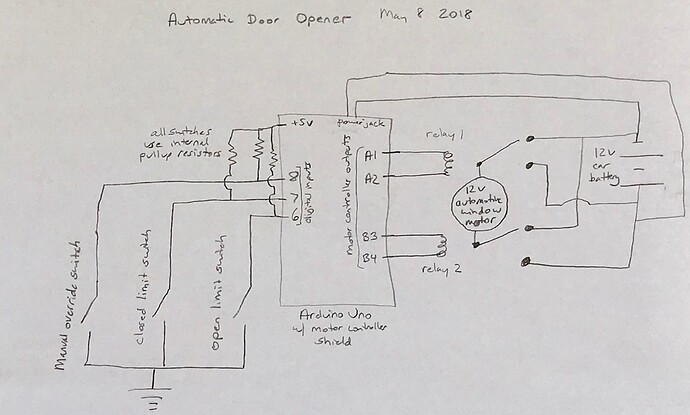 outsider:
Maybe the UP relay is welded closed and when the DN relay pulls in you have a "shoot through" condition (direct short). Or is it possible for UP and DN to pull in at the same time, if only for a few milli seconds?

That would be my vote, especially is he used the cheap Chinese relays. An auto window motor should not draw more than 5-6 amps, even stalled. They are really low powered because they normally use levers and guides to move the glass. 40 amps sounds like a starter motor for a small 4 cylinder engine.

As I understand it, you're saying that the relays are staying switched or switching wrong and causing a short. When I look at the diagram, no matter where the relay common connects to, I don't see a short - unless the relay is somehow connecting the NC to the NO terminal. I can't picture how that could happen intermittently, the way a relay works it seems that would be a permanent problem.

It also functions, so whatever is wrong is intermittent. The short seems to happen more often during the wait time a minute or two after the door moved. But I might be wrong about that and just have caught it those times and missed it other times.

I have ordered automotive relays to replace my cheapos - and those are rated 40A - so I'm not sure that 40A inrush current and 7A normal running current is so strange for a window motor. I have been researching using an NTC thermistor to limit the inrush current, this seems to be recommended as a good thing typically. However, this operates outdoors, which can be 5F to 95F. Would an NTC still work?

Thanks again for your help.

Have you checked for carbon tracks between NO and NC terminals? Both on the bottom of the circuit board AND under the (blue?) plastic covers? Personally, I never use NC contacts for heavy and / or inductive loads like motors.

Looking all around the relays, no carbon tracks. By under the blue plastic cover, do you mean pull the relay apart?

Looking around at using zener diodes to protect the relays, I found this circuit diagram: 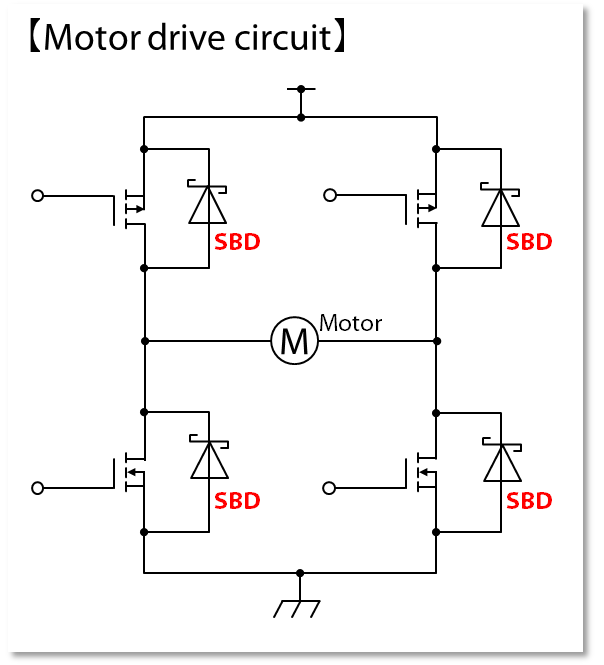 When I tried looking for a 15 volt zener diode, I figured it had to be able to handle 6A so the power = IV = 90W. Not sure if I have that right or what the max and min voltage means. Would this one work? zener diode MMSZ5244ET1G

Where are the zener diodes. I only see Schottky diodes.
Useless to add them to mosfets, because there is already one inside the mosfet.
Leo..

Wawa:
Where are the zener diodes. I only see Schottky diodes.
Useless to add them to mosfets, because there is already one inside the mosfet.
Leo..

Actually they are sometimes added to MOSFET bridges because the schottky forward voltage drop is 2 or
3 times less than the MOSFET body diode forward voltage, reducing losses.