Ok i know you probably get newbies on here every day but i really need a schematic and help on the 8x8x8 cube i need help on how to connect the rgb’s and what board to connect them to? Im doing it as my yr. 12 project so it has to be difficult and time isn’t a problem i have a whole year! also with the program that makes the images in the cube if i took it to say an IT teacher who programs would he have trouble or is it easy? ( could i do it?) i have no programming experience!

I need as much advice as possible I’m only young and haven’t used Arduino before! i was also looking at making it react to sound? or will that not be as creative as the programming way?

A cube that size is not a beginners project.
For a "simple" 8 by 8 RGB matrix look at my project
http://www.thebox.myzen.co.uk/Hardware/Hexome.html

The software that helps you make patterns is again non trivial although I am sure you can find one that is ready made on the net.

Ok thats really cool but i am already really wanting to do the cube? How hard is it? My teacher is happy to hep he just needs the schematic!

It depends on how much multiplexing you want to do.

There are many ways of doing this, however the critical bit is designing your schematic, the actual making is almost trivial.
What cubes have you looked at so far?

I have just been googling them as i thought they were interesting? I haven't really found an all out plan which is kind of what i need, could you recommend one? Also what do you mean by multiplexing? i need all the help i can get! haha

Multiplexing is turning the LEDs on an off rapidly so they look like they are on all the time. This way you drastically cut down on the number of lines you need to control them. See
http://www.thebox.myzen.co.uk/Workshop/LED_Matrix.html

Start off with something simpler say a 3 by 3 by 3 cube and try and understand what is happening, this is far more usefull than just building what some one else has done. This is an education project. Are you going to be educated as a designer or just learn how to follow a drawing like a solder monkey?

Ok so if i build a 3x3x3 what kind of board am i going to need? and can i use the same board for both?

You can do everything with a Uno.
You will also need transistors or FETs to boost the current of the outputs.

Try this for a start.
http://spider.dnsdojo.net/SpiderProjects/index.php/3x3x3_LED_Cube
Replace the PIC with the outputs from the arduino.

What about an rgb version? Because that is what i want the big version to be?

liamd-07:
What about an rgb version? Because that is what i want the big version to be?

I would start with something much smaller, maybe a 3x3x3 cube with single color LEDs.

eg. If you were going to build a racing car would you start with a go-cart or a Formula 1?

It's really a difficult project, not for beginners. A big RGB cube is an 'expert' level job, both from the electronics and programming point of view. There are many, many problems to be solved and you have no experience. Your teacher might not be able to help because programming microcontrollers and LED chips is very different than programming a PC, at the very least you'll need assembly language skills to complete it (OTOH he might be an Arduino expert - I'm not telepathic, ask him if it's the sort of thing he's good at!)

It would be a big help if you can find somebody who's done something like this before.

I started with a 4x4x4 cube. with just resistors, leds, and an arduino. I would recommend doing what I did, start as simple as possible, then figure out ways to improve it. You will learn why something is a good or bad idea.

Soldering the cube is actually a bit more difficult than mike would lead you to believe (no mike, monkeys dont solder). You may want to look up some instructables.

A 4x4x4 cube can be controlled with nothing but the arduino (using 20 pins), and its about as big as you can get, without getting more complicated, so thats a good starting point. You will learn how to solder up a 3D object without using a PCB, which is challenging for most. You will also learn about multiplexing (a good time to learn abut charlieplexing too, but you may want to save charlieplexing for a different project.)

After you have mastered a simple cube, you can move on to learning how to control many inputs/outputs with a few control lines using electronic components for converting parallel data into serial data. Shift registers are a good start, there are also more sophisticated ways using LED drivers, which is where things get really complicated... so start with shift registers, then drivers.

I made an instructable to explain how to convert the 4x4x4 cube to use shift registers, it can be found here: 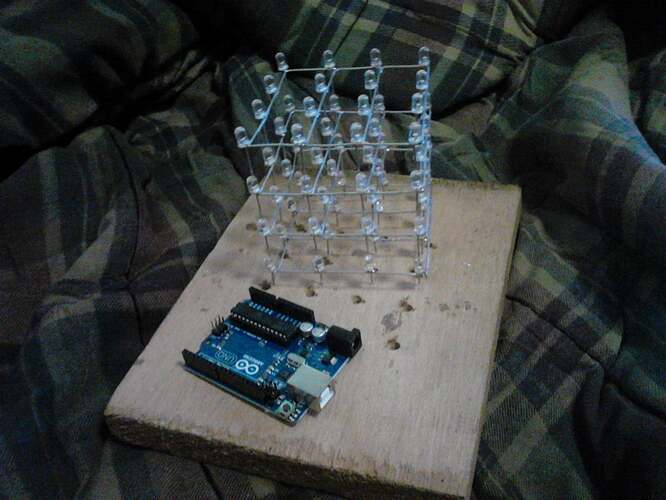 4x4x4 LED Cube Upgrade With Shift Registers (74hc595): This project started out with a bag of LEDs that I had removed from flashlights, to convert to UV flashlights. I knew I would find something fun to use them with, but It was months before I...

RGB is just 3 LEDs where you used to have 1 LED, but it really does complicate matters quite a bit. I started with a n 8 LED setup using ShiftPWM, its well documented and supported here, so its what I used to learn more about controlling RGB LEDs.

I am anxiously awaiting for some RGB LEDs to arrive, I have plans on making a 4x4x4 RGB charlieplexed cube that uses no other electronic components (64 RGB LEDs, Solder,Wires, Arduino ) If all goes well (which probably wont...) I may do an 8x8x8 charlie cube. Thats 512 LEDs, and over 2,000 solder joints!

Ok thanks guys i will look into the smeller one! But now my teacher is saying i have to find one that runs off a 18m or o8m pickaxe? Is that possible i think he is reluctant to use an Arduino because he hasn't before( Me either) But all the cubes i see are on arduino's??

Are arduinos difficult to use they just seem to be the one that everybody uses?

liamd-07:
Ok thanks guys i will look into the smeller one! But now my teacher is saying i have to find one that runs off a 18m or o8m pickaxe? Is that possible i think he is reluctant to use an Arduino because he hasn't before( Me either) But all the cubes i see are on arduino's??

Are arduinos difficult to use they just seem to be the one that everybody uses?

I've used picaxe chips around three years or so ago. There will be a really maximum speed difference between a arduino running optimized compiled C++ code and a picaxe chip running tokenized Basic code. Might be fine for smaller led cubes but I would really do some research on it. There is/was very friendly and helpful people on the picaxe forum and if I were you I would certainly ask them if anyone has ever built a led cube of the dimensions you want and find out if it's been done successfully before or not.

Thanks heaps retrolefty i will certainly go on there forum haha! Any other suggestions on wiring schematics would be helpful to!

liamd-07:
Ok thanks guys i will look into the smeller one! But now my teacher is saying i have to find one that runs off a 18m or o8m pickaxe? Is that possible i think he is reluctant to use an Arduino because he hasn't before( Me either) But all the cubes i see are on arduino's??

liamd-07:
Are arduinos difficult to use they just seem to be the one that everybody uses?

C++ is much more suited to microcontrollers, but more difficult to learn.

C++ will run much faster and allow much finer control over timing, this is important for things like LED cubes.