"A Gator riding shotgun on a LIN bus of slaves

A little networking humor explained …
The Gator board (Arudino compatible) is the Master Node 0 in the Master/Slave (half/duplex) network configuration.
The LIN bus (Automotive “Local Interconnect Network”) is modified for use for the Arduino/Freeduino network.
My KIRSP Protocol 1.0b “Keep IT Real Simple Protocol” is the communications network protocol software for all the nodes.
All Slaves are controlled by the Master node 0.

<Thats it, I am running out of my Arduino/Freeduino development boards for slave nodes this project!>

Picture Notes:
All nodes are crystal controlled —> NO ceramic resonators which can drift with temperature.

Only one dirt cheap unregulated power supply is needed to drive the whole LIN bus.
The master is driven via USB power and the slaves via 50 ma. 5 VDC regulator on each LIN node supplies the power.

The Gator sketch software is uploaded via USB. The second Gator hardware serial port is connected to the LIN bus board.
This makes it extremely easy to debug networking problems.
All the Slaves are uploaded by attaching a FTDI cable or Modern Device BUB board and dis-connecting each LIN bus / slave
interconnect cable.

On each LIN Bus board there are 3 low power LEDs for Tx, Rx and LIN fault.

On all nodes have the pin 13 red LED that is used to indicate configuration errors, good data and diagnostic errors.

Unless you have an expensive communications anaylzer … here is a few tips and hints in networking Arduinos/Freeduinos.
#1. Have the Master Arduino network main board with 2 or more serial ports. (Mega [4] or Rugged Circuits Gator [2])
This will speed troubleshooting and by using one serial port for the network and the other for uploading. This
helps speed up development time.
#2. All network nodes should be crystal controlled as opposed to ceramic resonators. (Precision baud rate timing)
#3. Use only “hardware serial ports” instead of software serial ports.(Hardware works much better than software UARTS)
#4. Have a 5 vdc buzzer to indicate the reset startup sequence. (Helps troubleshooting)
#5. Use only low power LED indicators 2 ma or less to indicate communication error status or TX/RX status.(Save power drain)
#6. Use the FREE internet “RealTerm” serial port anaylzer program for serial troubleshooting.(Saves troubleshooting time)
#7. Error checking is a requirement. My design used CRC-16 error checking. If it is good enough for disk drive
manufacturers to use then it should be good in networking Arduinos/Freeduinos.
#8. Since the LIN Bus uses a Master/Slave configuration (half duplex) along with RS485, then having a “resource heavy Master”
micro controller which has the speed, I/O, serial ports and memory to poll the many slaves in the network is a requirement.
I chose Rugged Circuit’s 2 hardware serial port “Gator” 324P board which runs at 20 MHZ which has the same memory as the
328P. The next step up would be the 4 port Mega Arduino at $26 more in cost.

<Design Problems (all fixed)>
#1. Designing an easy to use network protocol for the Arduino/Freeduino.
#2. Finding the best, easy to use, low cost bus transceiver → LIN. If it works well in the harsh environment of an
automobile then it should work well with an Arduino/Freeduino. (RS485 / 2 node RS232 should work fine also)
#3. Designing a compact LIN node printed circuit board.
#4. Finding and modifying an EEPROMLESS non table driven CRC-16 error checking routine for the LIN Bus.
#5. Echo back from the LIN transceiver. A RS485 transceiver has a direction pin which switches the bus transceivers from tranmit to receive mode.
The LIN chip has none and when it transmits all the chars are echoed back into the receive buffer.
#6. Making the network work using Arduino sketches for the network software.

On the software protocol side, there are not that many protocols to chose from. Modbus is a open “standard protocol”
but it was not created for a micro controller like the Arduino, so I decided, to roll my own with a very simple,
very reliable, easy to use, protocol that would not overburden the limited resources of the Arduinos/Freeduinos.
I named it KIRSP. “Keep IT Real Simple Protocol”

Note: KIRSP can be easily adapted to RS485. You could even adapt KIRSP to a Master/Slave
configuration by using RS232 @ 2 nodes @ 50 feet.

What KIRSP doesn’t have using LIN bus:
#1. NO peer to peer communications due to the automotive 1 wire bus LIN transceiver.
#2. Nodes greater than 16. This LIN bus limits this to 16 nodes max.
(1 master & 15 slave nodes)
#3. High data baud rates. 19,200 is the fastest baud rate allow on the LIN bus.
#4. Full duplex communications. The LIN bus transceiver requires half duplex only.

Several items to keep in mind when using KIRSP.
There is only ONE Master (node) and many Slaves(nodes).
Each node has a unique “node ID” The Master node ID address is fixed at 0 and the Slaves are user defined between 1-15.
The Master node commands all of the Slave nodes. Slave(s) never commands but only responds to the Master. Slave node(s)
only wait for a transmit packet to be sent from their Master with their unique node ID address. Only after receiving
the transmit packet from the Master and after CRC-16 error checking will the Slave responds with data to the Master,
if commanded to do so with the ACK/NAK enable bit set by the Master node.
Slave node(s) never talks to other Slave(s), due to the LIN transceiver bus.
The Master initiates all communications on the bus.
The Master never responds to a Slave node and the Slave never transmits unless the Master commands/instructs
it to do so.
The Master should have more memory and I/O resources to handle all the data from all of the Slave nodes.
The Master should have two serial ports for easy serial troubleshooting.
The Slave nodes can be very inexpensive low power clone(s) which draw their power from the bus. 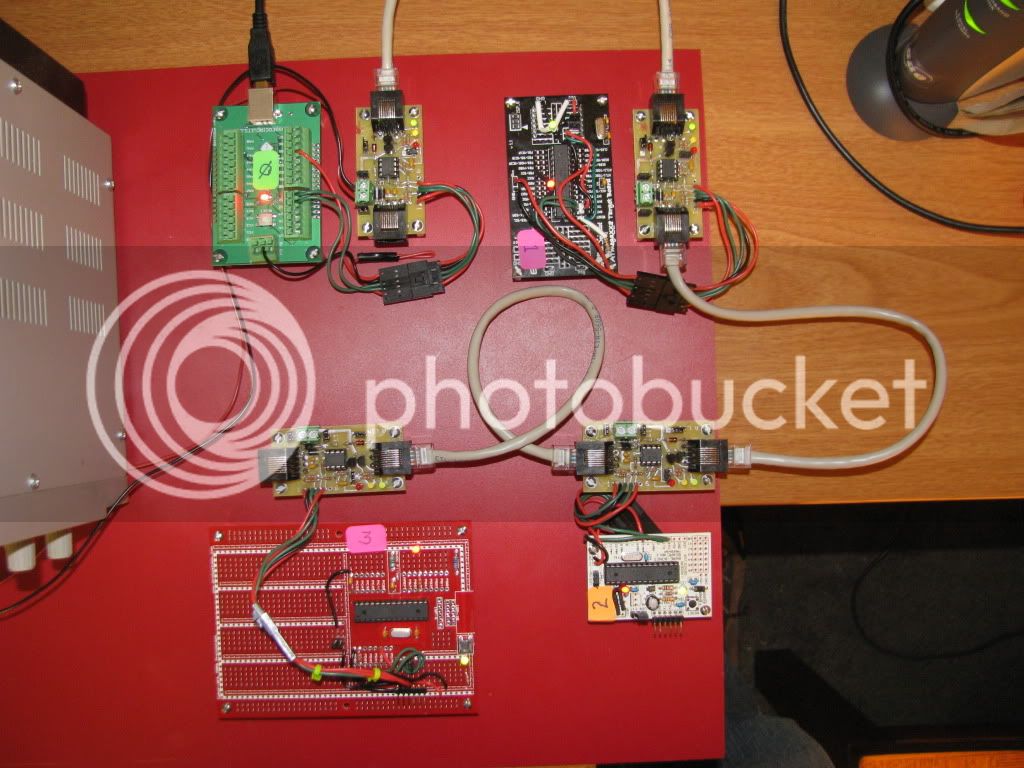 Really nice! (and thanks for the free publicity) :-)

I'd never considered LIN much before, having stuck with SPI/I2C/CAN. But LIN sounds interesting.

What is all this for? Proof of concept for a new product? just for fun?

What is all this for? Proof of concept for a new product? just for fun?

BTW Can you indentify your "Green" Gator in the network? ;)

Close up of LIN node board 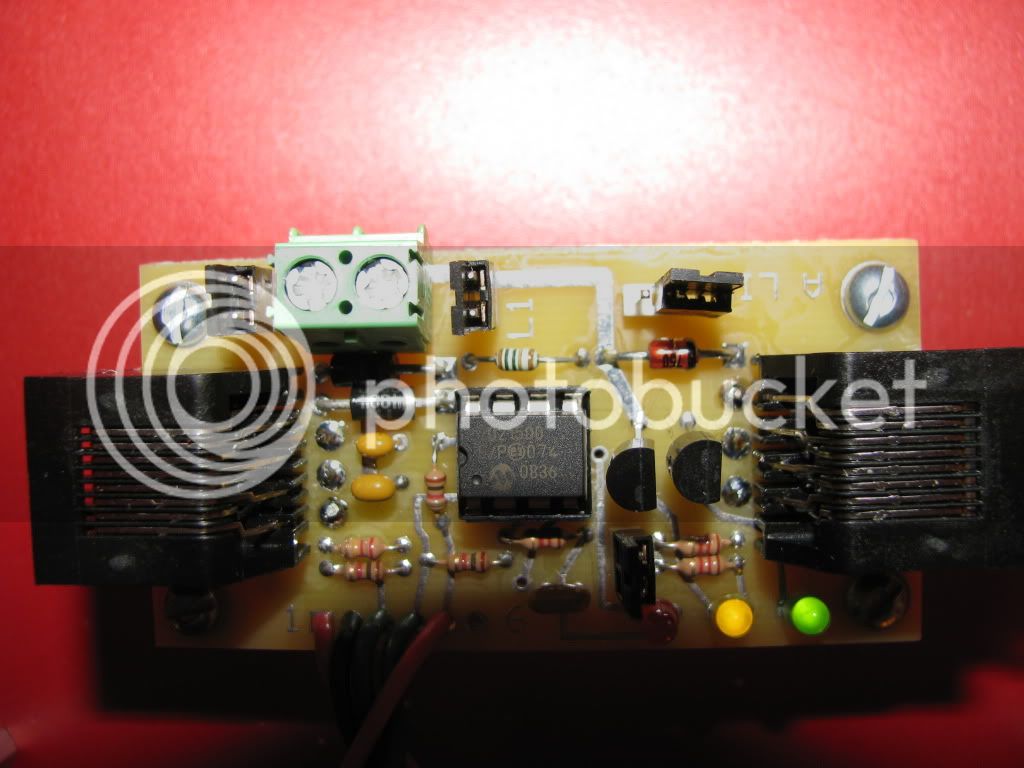 The question comes up "How did you route the power, ground and LIN bus signals, on your LIN node board, thru the Microchip MCP2021 LIN transceiver chip?"

My next door neighbor, the PCB designer, used the "rabbit out of the hat trick" by allowing three jumpers to be installed on the bottom side of the node board to connect both Ethernet connectors together. See picture below. Without this trick, the whole project would have been in jeopardy because without the easy to connect Ethernet cables and the self powered slave nodes then the next alternative would have been the "unpowered" RS485 solution. 8-) 8-) 8-)

I'll share something I learned. On my self powered RS485 nodes, I simplified the PCB layout by putting both the RJ45 connectors on the same end of the board. I got three 1.25" x 2.5" prototype boards from one ExpressPCB miniboard.

There is no comparison ... having 23 components on 9 nodes boards from ExpressPCB with all the LIN node configuration options on board ... beat that "topper" You are comparing apples with lemons. ;D ;D ;D

I don't understand what you are trying to say. 3 of my node boards from each miniboard x 3 miniboards per order seems to come to to the same number 9.

I was simply pointing out that it wasn't necessary to resort to the three jumper wires by putting the RJ45s on the same end of the board and the yield of three nodes per miniboard was the same. I wasn't actually "comparing" anything, just suggesting one way to make your board a little easier to build.

Good - thanks for the input, but my pcb designer likes to have mounting holes on all corners to support the ethernet cabling.

Good - thanks for the input, but my pcb designer likes to have mounting holes on all corners to support the ethernet cabling.

Yes, my boards have the holes on all four corners as well.

Of course, no one would use ExpressPCB for production quantities of PCBs.

While I'm sure the Futurelec board is a nice one, I doubt that it has the convenient RJ45 connectors nor the self power that were part of my design criteria.

Good ... please do post a picture and schematic so other forum members can view it. Of course, use another link so users do not get my node boards confused with others. After all, this link and others are about networking Arduinos. Anything that would "ease the pain" and prevent from re-inventing the wheel would be very benefical to other forum members attempting to network Arduinos. Photobucket has the FREE picture sharing website with links. ExpressPCB has the schematic to BMP conversion. 8-) 8-) 8-)

Don't worry, your thread is safe from my pollution. :)

EJ This is my PCB designer ... "batboy". He will chime in on your suggestion. Thanks EJ for your PCB modification suggestion but it is nearly impossible to put both the RJ45 connectors side by side. There are too many support components that attaches to the LIN bus transceiver and to the RJ45 connectors. I made this printed circuit board so there is a feed in and feed out when installed into a special enclosure. BTW EJ Topper, I am also interested in your RS485 node board but you cannot top something with V A P O R W A R E !!!! ;D Cheers.