This is a bit embarrassing, but me and my multimeter could use a second opinion

I have Power Control Unit that is plugged into the wall and gets 110 VAC it then outputs between 0-65VAC to control the transparency of an electrochromatic film. The PCU also has three terminals to attach a potentiometer. Depending on the variable resistance provided via the pot the film fluctuates transparency. My ultimate goal is to replace this analog pot with a device I can control computationally. (Maybe an MDAC or a digipot..)

Regardless of how I ultimately replace the analog pot, my first task is to figure out what voltage the three terminal for the pot are outputting and I am confused.

When I hook up a potentiometer to the arduino there is ground, power, and the analog in, so my assumption is that the three terminals on the PCU would follow the same pattern, but it is not so clear...

Evidence it is DC:

Evidence it is AC:

Why would there be a charge coming through the middle terminal, shouldn't it just be an analog in? As when it is wired to an arduino.

How do I determine conclusively whether it is AC or DC? If it was DC wouldn't there be a clear ground?

Evidence it is DC:
When I test with the multimeter it reads both as AC and DC, which I have read indicates DC.
The reading become negative when I switch the probes- indicating polarity
I have attached two LEDs to it in parallel with a resistor (as this post suggests) and one led lights up.

My guess would be rectified (unfiltered) AC.

There is no clear ground.

That could be, or there could be an isolated-internal ground. If you plug your laptop into the Arduino, the Arduino's ground isn't earth-grounded.

The best and safest thing to do is just post a decent internal photograph (or two or three) of the device so we can see what’s inside. The adjustment pot may provide a clue since it could be directly in the gate triggering circuit of a triac that controls the output voltage.

Thank you for your responses! If it is unfiltered AC I wonder how I would go about measuring that. Perhaps the AC setting on my Multimeter or a contactless voltmeter? I am going to have access to an oscilloscope this weekend, so I will collect more info then.

Here are those internal photos: 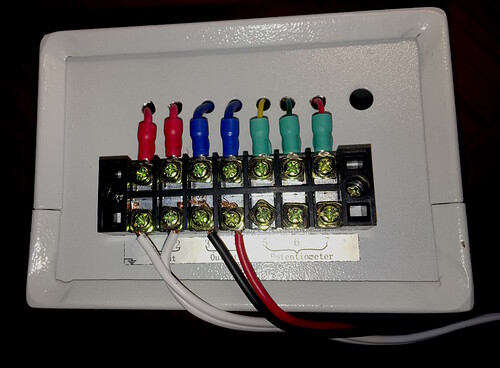 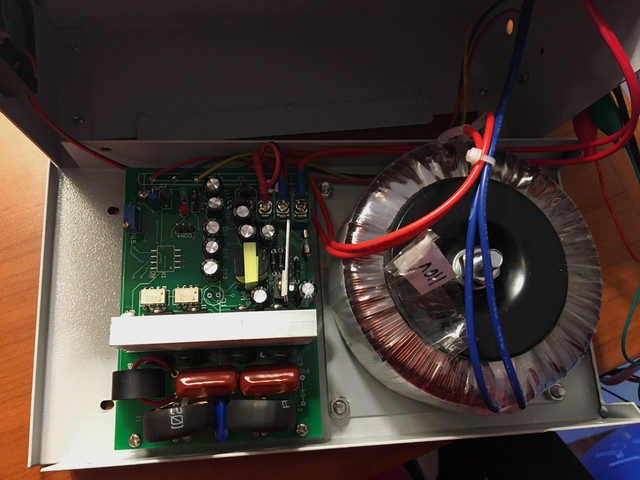 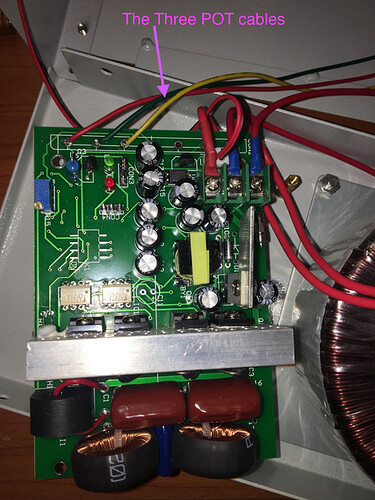 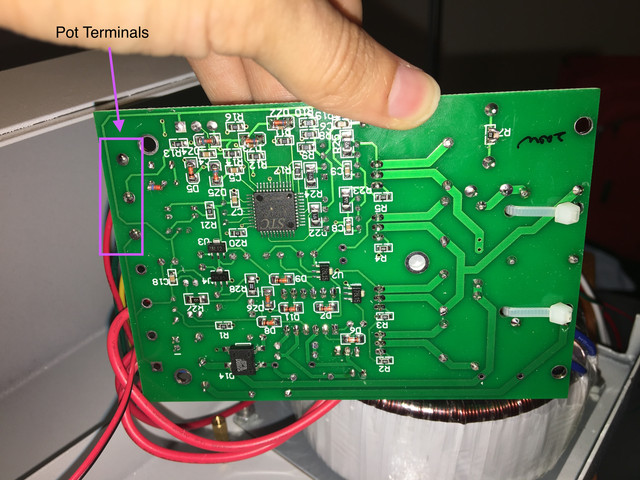 Since the device has unknown voltages it may be worth considering a pair of LDR's illuminated by LED's.

Total isolation, and not ac/dc dependent.

crecord:
My ultimate goal is to replace this analog pot with a device I can control computationally. (Maybe an MDAC or a digipot.)

Common misunderstanding of what a "digipot" - more correctly a "digital volume control" is.

Definitely a Chinese design board with that STC processor.

I would redo the dc measurements to the pot using the center terminal of the three screw terminal block on the top of the board as the common terminal and see what you get.

Please careful, you probably have some high voltage dc in there (>100 volts), it’s very hard to tell without seeing the capacitor voltages and the device types.