I use pcf8091 dac to generate a 10 Hz sine wave in the way similar to described here:

Have you ever wanted more analogue input pins on your Arduino project, but not wanted to fork out for a Mega? Or would you like to generate analogue signals? Then check out the subject of our tutor…

I only have a 2k resistor between DAC output and ground and connect load to this resistor via 200 nF capacitor to separate DC from it. See picture.

The problem is following.
It works fine if I have load > 300kOhms
If I go down to 50k the sine amplitude is about halved.

Any Idea how can I feed AC from this circuit into 10k load? 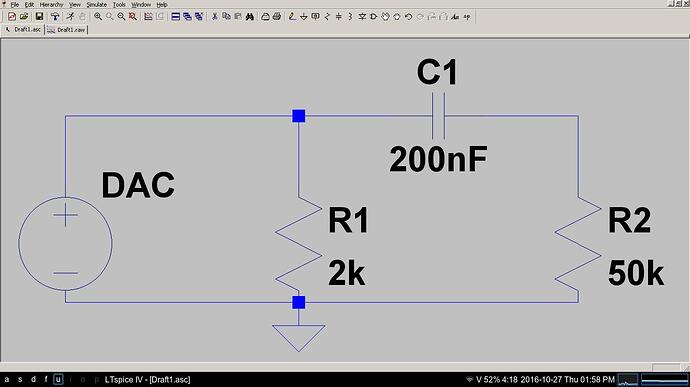 I calculate the reactance as 80K ohms.

10uF is more typical for audio frequencies, the reactance for that is 1600 ohms, still pretty high.

ETA:
Admittedly it is very low impedance, but the LM386 typically has 250 uF.

Yes, I just realized it. It was really low capacitance.
On the beginning I was expecting MOhms of load and then I realized that it is not so high but completely forgotten about capacitor resistance.

That would not save me, I was thinking about a unity gain amp blaming the low current rating of ADC, but after some data check and calculations I have figured out it was not the case. The problem was in the low capacitance value.