I am currently using two servos to facilitate scanning of an area. I have a LIDAR-Lite attached and it takes a reading on every degree of movement.
My question is, I am after more speed, but whilst maintaining positional understanding. I know speed and control may not go hand in hand, but I am hoping that somebody here can suggest a change in software/equipment.

Here is an example of my project so far:
Project carrying out IR scan (Youtube)
As you can see it scans quite slowly. It is the same speed when the servo's have their own power supply.

Does anybody have any suggestions in what I can do to improve the pace at which a scan is carried out?

calco:
Does anybody have any suggestions in what I can do to improve the pace at which a scan is carried out?

Use a faster scanning system; whether it would work with this particular LIDAR unit is a question, though.

For one thing, the offset of the transmitter and receiver portions of the sensor might make it difficult.

Secondly, the wavelength of the system (905 nm) might make optics cost a bit more than you want.

The fastest way to do the scan would be to use a pair of galvonometers (driven closed-loop) with mirrors attached, so that one scans the X axis, and the other the Y axis.

You could even do this without galvos, if you have some precise-controlled speed motors spinning multi-faceted mirrors - again, arranged in an X/Y scanning fashion (look into how they do it for laser light shows, or for early mechanical TV systems). This kind of a system would be easier to construct, as well as cheaper (as galvos and drive electronics aren't inexpensive). Note that for such a setup, you would need some kind of timing index marker on the spinning mirrors (so you can tell where the mirrors are positioned).

The second fastest way (but more complex in other ways) would be to spin the whole unit - mount it on a turntable rotated by a motor, feed the signals from the sensor thru a 6 pin slip-ring conduction device - and have an index sensor so you know what direction the sensor if facing for each "sweep". You'll only be able to rotate the sensor so fast (10 - 20 rotations per second, most likely), mainly due to limits on the slip ring system (faster speeds are possible - but the slip ring becomes much more expensive).

In effect, this will give you a 360 degree "2D scan" (like a radar - this is basically how the LIDAR sensor on the Neato XV-11/21 vacuum cleaner robot works) - once you have that, you can rotate/tilt the whole spinning affair to scan the other dimension (which will have to be at a much slower rate, due to the gyroscopic effect of the spinning unit). You might be able to do a separate mirror scanning the "Y" direction as well.

Finally, note that all of these scanning methods are going to have distortion (even your pan/tilt system) due to the polar coordinate nature of the scans (which you might have already noticed - and perhaps even corrected for in your software).

Hope this helps, or at least gives you some ideas...

A fast scanner using the LIDAR-lite and a rotating mirror is described here.

Wow thanks cr0sh! Just spent a fair while googling everything you described there!

Having a look at galvos, they seem the ideal solution. But possibly a little out of my depth.

If I was to use stepper motors in place of galvos, would this work? Or is each step going to be too greater movement in the mirrors?
For example:

With multi-faceted mirrors, is it the speed that determines angle of the laser? Got a bit confused on that one. I imagine you mean something like this: 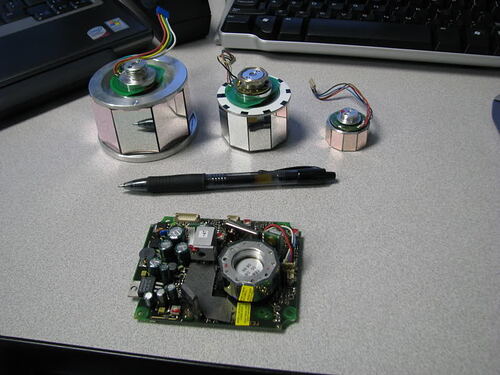 800×600 87.2 KB
I can't seem to find any of these for sale, as I would need a large enough one to cover the receive and transmit side of the LIDAR-Lite.

The whole unit scanning is something I did think of, but thought it could get a bit unwieldy. Here is my fantastically drawn mock up idea of that:

So the LIDAR-Lite will rotate via gears and the whole housing will be on an axle driven by another stepper. All seemed a bit hefty.

I have noticed the polar coordinate distortion, but thats for a later date

Also thanks jremington, seeing an example project gives me confidence in the shift across to using mirrors!

It's interesting that regular mirrors work - 905 nm is near to "far IR" range, which normally require more expensive and exotic optics (close to what you would find in a laser cutter/engraver, for instance). Worth a shot trying, I guess!

Stepper motors would probably work ok, as long as you can keep the mass of the mirrors low - use thin mirrors, maybe even acrylic instead of glass - and use a stepper with small step angles for the best resolution.

In regards to regular motors spinning a mirror (or multi-facet mirror) - what you do is you have a timing mark (in your picture, note the black/white marks on that one mirror assembly - those are timing marks). If you can keep the speed of your motor constant (again - based on the timing marks) - you can know, within a certain level of error, just how far the motor has turned when a timing mark has gone by. Say you have a single timing mark, so that the mark goes by once a second, indicating the shaft has turned a single rotation. If you can keep that mark passing by at once per second (by increasing/decreasing the voltage to the motor, based on whether the mark passes by sooner or later than once per second - via a PID algo), then you know that the motor is turning at 60 RPM, right? Or - 6 degrees per second (6 x 60 = 360 degrees). So - if 5 seconds have passed since the timing mark has passed, and the motor is being kept at a constant 60 RPM - you know you have rotated 5 seconds x 6 degrees per second - or 30 degrees.

Using multiple timing marks allow for you to gain resolving power (accuracy), plus allow you to keep the speed more constant, since you aren't waiting for an entire revolution to occur before modifying the speed of your motor to keep it constant. The timing marks can be reflective (like in the picture) - or you can have a hole pass between an IR slot detector - this kind of thing can be very accurate - it was in fact used for timing in both "hard-sector" (one mark per sector) and "soft-sector" (one mark per rotation) floppies (5.25 and 8 inch) back in the "old days". Similar sensors were used in mice, and they are used in many other applications as well.

Also - multi-faceted mirror assemblies are typically custom made devices manufactured for a specific purpose - in order to get them, you need to take them from other devices that have them (supermarket barcode scanners are one common source). Or, you have to build them yourself (a 3 or 4 mirror system is easily doable, as long as RPM stays somewhat low).