All 4 Lights are on, Arduino Not working properly.

,
I am a beginner to all this stuff,
recently bought my Arduino Uno R3 from TechShopBD, a famous retailer in my country,
I was trying to make a LCD Thermometer using this link 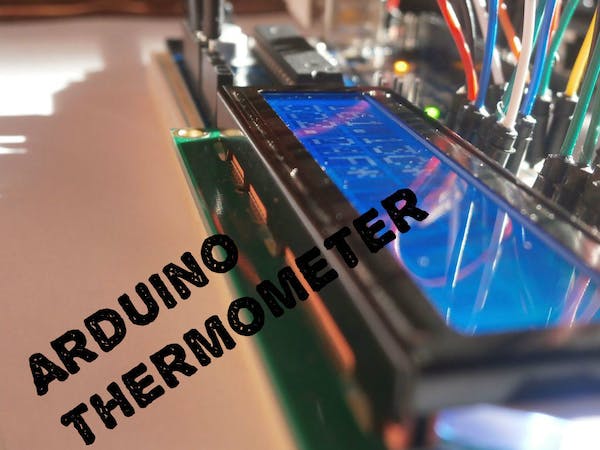 I'm going to show you how to make an LCD thermometer with an Arduino UNO and a LM35/36 analog temperature sensor. By Konstantin Dimitrov.

Suddenly,
Out of nowhere at the middle of my Board smoke started rising,
So I turned it off making sure there was no damage done.
I did everything and at last I find that my device manager nether The Arduino IDE detects my Arduino and all of the lights are ON.
I would request help ASAP since I am trying to learn Arduino for school events which I hope will happen after this COVID-19 stops.

The first thing to do is carefully study your circuit until you can determine what was the error you made that destroyed your board. It's important to use mistakes as an opportunity to learn, so that hopefully we won't repeat them.

Then buy a new Uno (better yet, get two in order to avoid future interruptions) and get back to your journey of learning.

"Magic smoke incidents" are an inevitable part of learning about electronics. Of course, we should always do our best to avoid them, but also accept that they will happen and make sure we don't let that hold us back.

My guess is that you were using external power and connected it improperly. It is very hard to get a "magic smoke incident" any other way...

Also, I recommend cheap CH340G-based clones, particularly for novices who are more likely to connect things wrong - they are considerably more resistant to abuse than "real" Unos, and much cheaper to replace if you do (the atmega16u2 used as serial adapter on official boards is relatively easy to destroy) - you can't reprogram the serial adapter to pretend to be a mouse/keyboard/joystick (via UnoJoy et al), but most people don't do this.

No, I wasn't using any external power supply, all through a USB port directly to my PC.
I want to find if there is any solutions for this, it wasn't a magic smoke instead when I turned it on for the first time with everything attached correctly, a smoke appeared out of no where.
I do not want to buy clones or any weird stuff like that since I am in a country where international stuff is almost impossible. Say If I will buy a new one or not,

If it was not a power supply error then the next most likely thing is that your connections accidentally caused a short circuit or otherwise overloaded of an I/O pin.

tasnimulyoutube:
...when I turned it on for the first time with everything attached correctly, a smoke appeared out of no where.

Sounds pretty magical to me.

tasnimulyoutube:
Out of nowhere at the middle of my Board smoke started rising,
So I turned it off making sure there was no damage done.

Too late once it's been smoked.

But good to see you are working to improve yourself, don't let this stop you!

And I didn't know a 9V cell through the 5V regulator left enough current to run an LCD.

Hi Everyone, This is probably my last reply, I would like to say Thank you a lot for helping, I hope one day I can become professional like you guys! Now I would like a final decision that should I buy another Arduino now or are there any solutions to it?

GoForSmoke:
Too late once it’s been smoked.

But good to see you are working to improve yourself, don’t let this stop you!

And I didn’t know a 9V cell through the 5V regulator left enough current to run an LCD.

Thanks for the motivation!
I love you no homo haha,
Thanks my guy.

tasnimulyoutube:
Now I would like a final decision that should I buy another Arduino now or are there any solutions to it?

It is unlikely to be repairable, especially with your present level of knowledge. But you have not told exactly what component has failed.

I suggest you get some new boards and keep the failed board in case you can salvage it when your knowledge increases.

I have 2 Unos that have the AVR chip in a socket. If I burn a chip pin without burning anything on the rest of the board I can replace the AVR with one that I bootloaded or buy one already bootloaded. AVR's from the factory are blank, Arduino needs the bootloader program on the chip to make loading sketches easier.

My Nano has a surface-mount AVR. If I burn a pin, I'm not good enough to replace that chip so bye-bye Nano.

I was disconnecting wires on a project to switch them around and pressed for time I didn't power off first. That cost me a 4x20 LCD but the Arduino still runs.

If you get another, maybe also get reading glasses or magnifier visor to be sure where the jumper goes.

I don't know how much your store charges or what kind of budget you have especially now in pandemic, I ordered an RPi 4 from Seeed Studio (in HK) last month and tracking shows it in Ohio on Friday. Ebay sellers should be shipping if your country lets packages through and you can get cheap clones there.

We like to see Arduino-from-Arduino boards bought to support Arduino but part of what Arduino is is the open source, make your own part. You bought a full price Arduino and maybe sometime buy more or just donate when you download a new IDE... I am pretty sure than when I gave $25 donation that I would have to buy at least 2 or 3 Unos for the profit to be that much.
Arduino is also the IDE, the boards, the main site with loads of help, enough for a manual, the forum and the playground.

GoForSmoke:
Ebay sellers should be shipping if your country lets packages through and you can get cheap clones there.

Seems to be a general lack of aeroplanes and/ or container ships at present. I have yet to figure out where the two or three weeks delay in shipping that used to be the case, is.

(Not sure how many of my orders were in the containers that some stupid ship rolled off.

I ordered the RPi 4 last month and it tracks in to Stowe, Ohio, maybe 100 miles away at most.

We still had passenger jets flying not long ago and those are nightmare coaches but just a guess, cargo jets are not so risky.

We're in the green here but I don't know for how long. The local pizza shop take "green" to mean "act like it's 2019" and our State Republicans are suing the Governor to do the same. After all, if states that did as Trump said were the only ones with surges it would look bad politically so time to play with the lives of others, what's a few more 10,000's dead?

And then comes protests and riots and a possible spike because of 4 criminal cops in Minnesota. I think that BLM never figured out that their "love us or we'll kill you" total message drove a lot of votes and more important, electoral college twerps to give Trump the underhanded win.