alternatives to breadboards and soldering

If I have a project breadboarded, and its working fine…I’m ready to make several of them.

I’m not really into the whole etching PCB, through hole soldering thing…is there another way to put together a pcb on perfboard that doesn’t involve soldering? my circuit is real simple.

I’m looking for something like compression lugs or some other way to assemble a simple circuit with through-hole componenets, without soldering.

I would just breadboard them but the breadboard connections seem to have a lot of wiggle in them.

There are protoboards that match the layout of solderless breadboards. You don't have to etch them, but you do have to solder. Kind of hard to avoid solder. Some people evidently use wire-wrap.

You can make a wirewrap board instead.

I build most of my projects this way. Socket strips can be had here http://www.marcospecialties.com/product.asp?ic=SIP20L or from www.gravitech.us but you have to ask for them.

Also pins like these http://www.gravitech.us/208wiwrfehea.html to use with terminated wires & crimp connector housings from www.pololu.com to connect off-board buttons & stuff.

Get some 'island of holes' perfboard to build your project onto. I prefer velleman esc1/2, 80mmx100mm, excellent hole spacing. I have experienced other brands where the holes are not so evenly spaced, can be a awkward getting sockets in.

Here's an example - wirewrapped arduino equivalent of a Promini with offboard supplied 5V power, driving 2 PWBs I made with transistors turning banks of LEDs on & off.

www.futurlec.com has lots of boards to build up on also. You get what you pay for in that regard.

thank you crossroads, I think wire wrapping is exactly what I'm looking for.

here is a good video of wire wrapping http://www.youtube.com/watch?v=mzrn1SLwAHg

and a make online tutorial http://blog.makezine.com/archive/2009/07/lost-knowledge-wire-wrapping.html

this is DEFINATELY what I'm looking for.

regarding the image below from Nick Gammon's wire wrapped atmega board, I have three questions: 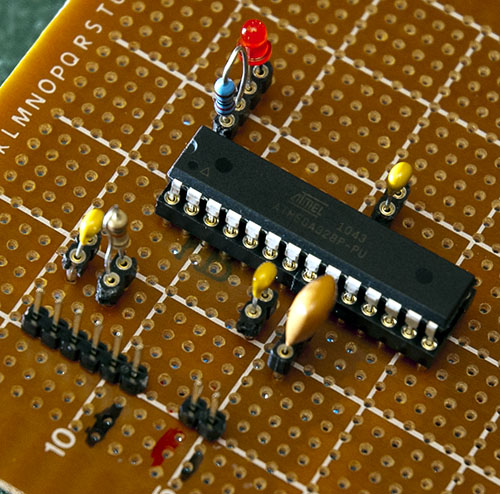 Also, round pins are not that good for wirewrapping to - the wire can just spin around the lead. I believe Nick was also just experimenting for his very first assembly after he got his wirewrap tool (for an outrageously high price shipped to Australia!)

Here's a whole mess of LEDs tacked in place & then wirewrapped onto. The empty strips in the middle are the breakout for a MAX7221 to go off to the 7 segments and decimal point lights (which are used for other purposes).

you use that for fencing?

Yes indeed. I have smaller versions (reply #4) that only do the lights & buzzer, no timer/score function. Maybe I'll do those as an add-on box sometime. They only do epee right now, need to work up sabre & foil code sometime. Kinda ran out of programming time when I went from unemployed to full time job again 35-40 minutes away.

3z33: regarding the image below from Nick Gammon's wire wrapped atmega board, I have three questions: ... 2. could you also just put the legs of those items through the board and wrap directly onto those instead of using the socket pins? Curious why he chose to use those sockets for the components that have legs that are plenty long to get through the board and be wrapped. (which is why I'm asking)

Reading up on wire-wrapping on Wikipedia, I believe the entire thing hinges on the wire biting into the corners of the posts. So for each turn, you actually get four connections. Thus wrapping around a circular lead is not really going to work properly. Even if it appeared to work later tarnishing between the wire and the lead might cause intermittent faults. But the biting into the corners (with tons of pressure apparently) is supposed to force out air etc. and provide a very tight seal.

I have read about people wire-wrapping onto LED leads. I imagine that could work if you wrap around what looks like the square part near the top: 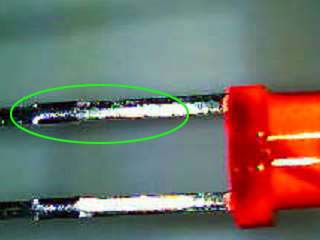 CrossRoads: I believe Nick was also just experimenting for his very first assembly after he got his wirewrap tool (for an outrageously high price shipped to Australia!)

And don't even get me started on the power supply on eBay that cost $200 plus $700 shipping!

The LEDs I have, have squarish legs all the way down.

You can wire-wrap single-side headers inserted into solderless breadboards. (no soldering required)

Another plus -- #30 wires tend to stay where you leave them (unlike jumpers). Your breadboard looks neater without the rats nest.

You likely won't need to rebuild a soldered version. And later, you can unwrap to rewire or make changes.

3z33: here is a good video of wire wrapping http://www.youtube.com/watch?v=mzrn1SLwAHg

and a make online tutorial http://blog.makezine.com/archive/2009/07/lost-knowledge-wire-wrapping.html

this is DEFINATELY what I'm looking for.

Wirewrap tools are very expensive, note, and you need the right sort of wire and gold-plated square pin sockets and pins - all it all probably the most expensive way to prototype, and I find it hell on the eyes (staring into a bunch of spikes I find to be a good way to get eyestrain!)

Having said that a good wire-wrap joint is a gas-tight cold weld and more reliable than a soldered joint allegedly.