I'd like to send the data from my arduino-based sensor array to the net via my EthernetShield. Pachube/Cosm has been very flakey. Are there good alternatives?

Are there good alternatives?

Quit thinking the world owes you anything. Get your own domain. Get it hosted. Use your own server/domain.

Quit thinking the world owes you anything. Get your own domain. Get it hosted. Use your own server/domain.

It takes moments to set up something like cosm using rrdtool.

It takes moments to set up something like cosm using rrdtool.

On a server that someone else owns/pays for?

Using a domain that someone else owns/pays for?

No. The world does not owe OP a place to host his private data.

Of course on his own server. But then, VPS's are ten a penny these days.

dude, PaulS. He was asking a question...

Hi. To close out this discussion, here are some of the alternatives to Pachube/Cosm I heard about:

How so? Just curious -- I hadn't heard there were systemic problems.

just wanted to add nimbits to this list - nimbits.com is the only one that's completely open source: http://www.nimbits.com

Ouch! everyone, I thought that Arduino was all about being open sourced. “OPEN” to ideas, comments, suggestions : “Sourced” to all with an open license, to share, to help when in NEED, for a common license.

This is the only reason that i felt comfortable using Arduino products and this website, because there are helpful people, bright people, who know no “domain”.

I am a old begginer, but who says you have to be too old to not learn something. Who gave you the chance that you needed to get you where you are. Times are tough for everyone, even me. But i keep going like a duracel battery. Not to stop because the currents draw is too high, not to stop because i pack is too warm.

I want to wake this discussion up a bit to see if there are any other alternatives to Cosm (Pachube).

And to short-circuit PaulS, I was a PAID subscriber to Pachube until they became COSM and cancelled my subscription and went to a free service. The problem with free services is that you get what you pay for. They have been down a number of times, various parts of the service quit from time to time, service is very slow in some respects, and haven't attended to the service in any meaningful way in months. I suspect they will disappear at some point.

And,...the reason I'm looking for a service on the web instead of rolling my own is simple, I live in the land of flakey power and don't want to take on the expense of trying to keep something online 24x7 out in the country.

I looked at Nimbits and couldn't understand what the heck they were doing and how to hook into it. The opening pages were so heavily jargoned that it looked like a different languge. Sen.se was so esoteric and philosophical that I couldn't tell, technically, what they were actually doing. A couple of others have disappeared altogether.

So, back to the OP's question. What are the alternatives to Cosm? If there are any.

And,...the reason I'm looking for a service on the web instead of rolling my own is simple, I live in the land of flakey power and don't want to take on the expense of trying to keep something online 24x7 out in the country.

If you have your own domain, and your own web-hosting company hosting that domain (you do not have to do it yourself), they are responsible for keeping it online.

Of course, in the event of a power loss at your location, I'm not sure how you expect to access any web server.

So, back to the OP's question. What are the alternatives to Cosm? If there are any.

Do you mean services that someone else pays for?

If you have your own domain, and your own web-hosting company hosting that domain (you do not have to do it yourself), they are responsible for keeping it online.

Of course, in the event of a power loss at your location, I'm not sure how you expect to access any web server.

True, but I really don't want to reinvent the wheel by coming up with my own storage, graph, etc code and then maintaining it instead of working on the sensors and controls I may want to deploy.

Do you mean services that someone else pays for?

I thought I was clear on this. I'm perfectly willing to pay my own way. I did that with Pachube until they became Cosm and cancelled the subscription. I looked at the rates quoted by nimbits, but couldn't understand what the heck they were talking about.

Don't misunderstand, money definitely is a concern, but a reasonably priced service to store data and provide tools to manipulate and display it would be nice. Especially if I could actually read and understand their front matter.

Don't misunderstand, money definitely is a concern, but a reasonably priced service to store data and provide tools to manipulate and display it would be nice.

I have my own domain ($35/year to keep it), and I pay $10 a month to have it hosted. On the server, I can create MySQL databases to store the data. I can use PHP to create scripts to display the data any way that I want.

I know that that is not the same as using existing tools and not having to worry about how/where the data is stored. But, that's what I'm comfortable with. I do not know of any free, or pay, services that provide what you want.

Thanks Paul, anyone been looking into this?

In this age of millisecond attention spans and rampant technology advancement, it's real easy to give up on an idea, but I'm old school and still looking into this.

I stumbled across emoncms.org for the tenth time and finally took a long look at it. This is a really great open source offering for monitoring power, temperature and the like. It took me most of an afternoon to get it working from my devices, but I did it. I have an Arduino mega2560 concentrator that sends data to both Cosm and emoncms to compare the services and their responses. With Cosm continuing its downhill slide, emoncms out runs and out plays Cosm by a large degree.

I had some trouble discovering how to send the data to emoncms, but with the help of their forum (which is active and well attended) I figured it out. Turns out that the API interface is extremely simple and easy to use, just not talked about much.

So, you folks that are looking for an alternative to Cosm, nimbits, etc., take a look at this.

Found and tried out another one. This time it was thingspeak.com and it’s pretty nice. The API to send data is a bit scattered about the site (take a look in places besides just the documentation), but it’s all there to be used. I’m currently downloading a subset of the sensor data I collect to the site and it works fine. I don’t have enough data up there yet to make a determination about speed, but it flies on the the stuff I’ve tried so far.

open.sen.se turned out to be pretty nice and supports cool little filters and combiners on the site that can do some interesting stuff.

emoncms.org is the most active and has a nice facility. The only problem I found was that they don’t support cross site ajax requests. That presents a problem with today’s multi-site techniques.

Cosm.com made some really significant improvements that virtually eliminated most of my complaints. The problem was that they worked on the various changes for months without telling their user base anything and we started to get disgusted with their problems. Then, one day, they turned on the changes for the entire user base. Odd way to do things, but hey, it’s their site. There seem to be a few problems still happening, but it’s really hard to tell which are problems with their site and which are mistakes by the people that are using it.

nimbits.com appears to be the most capable and claims to be free. However there is a data charge for using the service as cloud based. That’s not a problem for me, I don’t mind paying for what I use (within reason of course), but I went through the charge sheet and got totally lost. Now, I have a degree in business and have taken enough accounting courses to choke a hippo, but it was too much for me to understand. I even asked my neighbors son (17 yo) and he couldn’t understand it. Additionally, the site documentation is so heavily buried in jargon that I couldn’t understand how to actually set it up. Maybe one of you is willing to spend the time to figure it out.

Net, there are a number of viable services out there that can take our sensor data, store it, visualize it back to us, and return it to us if we want to go local for some reason. We have no more excuses not to totally automate every thing in our lives.

And No, I don’t promise not to wake this thread up again when I stumble across another one. 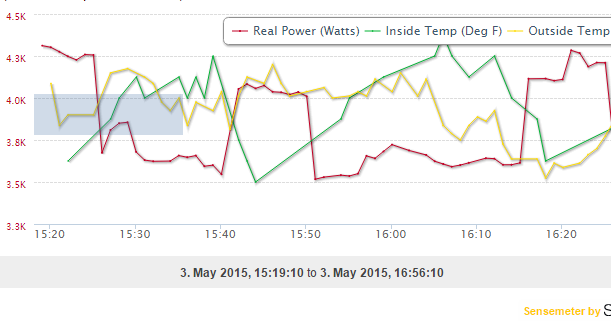 There are a few alternatives to Cosm for handling devices that report over the web. I'm currently playing with Sen.se ( open.sen.se ) and i...

(edited heavily on Dec 11, look below to see why) Previously < link > I discussed the possible use of Sen.se as an alternative to Cosm.  Th...

Edit: Naturally, the cloud service changed and things quit working. I didn't fix it, instead I'm leaving this as an example of what you get ...

Thanks for your research. I would like to find your review of these GUI/Data Logging sites in the Arduino Playground. Those three Blog pages with live graphs and meters are awesome!

Can you control the Arduino from any of them?

No, I didn't implement control through the sites. I could have with Cosm and probably the others as well, but I like my control through my own little arduino web server. I can do anything to it I want to without figuring out some weird API. Besides, it's faster since I don't have to wait for somebody else's server to get around to me. There are many folk out there that have implemented control though.