I am trying to do a demonstration in which energy from ambient radio waves (it doesn't matter which frequency) is used to charge up capacitors and blink a red 3 volt 1 mA led every 10 seconds or so. Is this feasible? If so how can I go about building it.

What does this have to do with the Arduino?

If so how can I go about building it.

Why not? People used to listen to radio without amplifiers.

A crystal radio receiver, also called a crystal set, is a simple radio receiver, popular in the early days of radio. It uses only the power of the received radio signal to produce sound, needing no external power. It is named for its most important component, a crystal detector, originally made from a piece of crystalline mineral such as galena. This component is now called a diode. Crystal radios are the simplest type of radio receiver and can be made with a few inexpensive parts, such as a wir...

The capacitors are a problem: they leak.
Blinking a led requires more energy than audio in a piezo (crystal) earphone.
The led has to blink long enough to be visible, that would be about 100ms. The 1mA during 100ms needs a lot of energy.

Powering an LCD clock would be easier. Even a larger LCD display requires almost no current.

There is a problem with radio waves: If you use only a coil, you get a lot of everything, but the result is almost nothing.
However, if you tune in to a strong radio station, you can get energy out of that.
Try to make an antenna, like a circular coil of 1 meter (or 1 yard) diameter. About 50 to 500 windings. Don't use very thin copper wire, that reduces the current. Add a variable capacitor and a radio diode. The diode to a capacitor and see if you can charge the capacitor when tuning to find a radio station.

It is feasible, there are topics on the web where people try to develop wirelesses hubs powered from such energy. The most energy you get today would be from VHF/UHF spectra, especially from your local digital television, FM radio, and mobile phone providers (90-1900MHz). You need a dipole tuned a frequency with most power density, with a diode as an detector - charging a ceramic capacitor..

It picks up radio energy and lights LEDs.

My idea (LW and MW waves) is totally different from catching energy from GHz signals.
Flashing a led with a mobile phone is only for a very short distance.
It is hard to say which signal is strong enough.
A good quality spectrum analyzer will show what is in the air.

Do we agree ? That getting energy from all frequencies at the same time is very hard ? And by tuning to a frequency you have to know about a strong signal.

Yes, there is enough power in MW, etc. to power sensitive headphones, but then our ears are unbelievable sensitive devices!

There is a commercial device called "Airnergy" that claims to harvest energy from WiFi hotspots to charge batteries.
Dave Jones has a hilarious review of this at EEVblog #55 – RCA Airnergy WiFi Hotspot Energy Harvesting Marketing BS – EEVblog

On the other hand, if you suspend a plate of metal under a high tension power line, you can easily harvest enough energy to light up a fluorescent lamp. See Richard Box's incredible "field of light bulbs" art project at http://www.stopgeek.com/richard-boxs-light-field.html

Back in the 60s I made a radio that was powered by the local long wave transmitter.

Also there was a man who lived close to a very long wave radio mast. He filled the loft with a criss cross of wires and used the energy to charge 12V batteries. Unfortunately the mast was used to communicate with nuclear submarines, and it put a dent in the radiation pattern, making it impossible to communicate with them. Even more unfortunately this null was in the direction of Moscow and it was thought to be some sort of Soviet jamming device. When he was tracked down he got three years in prison for illegal use of electricity.

There is another.. Regulatory problem.. the EU, GB (I believe and the US to name a few have laws about the allowable RF power that a human being can be safely exposed to and it's in the crystal Radio class... A high efficiency red led will show some light @ 1V8 and 500 or less uA or ~9 mW. There is also the thought that the human body is considerably larger and can absorb a lot more power. I know of three radio tech's that are now deceased.. all about the same age and all of brain tumors.
BTW Crystal headphones didn't become popular until the mid to late 50's. They were the really cheap replacement for a much more expensive high resistance type of magnetic earphone that was very sensitive. Brush, I think were the best. Second best was the receiver in a telephone of that era.

Erdin:
There is a problem with radio waves: If you use only a coil, you get a lot of everything, but the result is almost nothing.

I never said it was easy...

You'd certainly have to tune to the frequency of the most powerful transmitter in your area or the energy will cancel out.

As with any receiver, the trick is with antenna design: 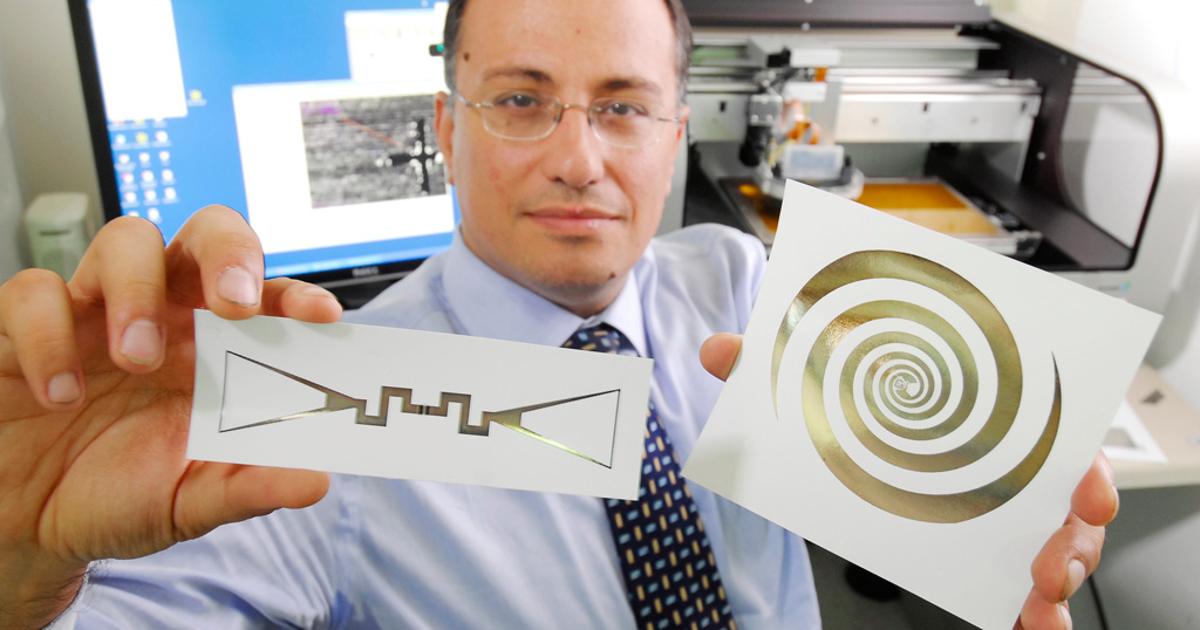 As you sit there reading this story you're surrounded by electromagnetic energy transmitted from sources such as radio and television transmitters, mobile phone networks and satellite communications systems. Researchers from the Georgia Institute of...

Tentzeris says exploiting a range of electromagnetic bands increases the dependability of energy scavenging devices as if one frequency range fades due to variations in usage, other frequencies can be used to pick up the slack.

The team is also looking at combining the energy scavenging technology with supercapacitors and cycled operation so that the energy builds up in a battery-like superconductor and is utilized once the required level is reached. The team expects this approach would be able to power devices requiring over 50 milliwatts.

I'm going to suggest a long, random wire antenna to scavenge the bulk of AM broadcast stations in your area.
This wire will couple a fair amount of low freq energy into your diode rectifier/cap storage circuit.
Expect to capture power line radiation, low band Ham radio, AM broadcast, lightning induced energies etc.
Ideally you would use an antenna length "tuned" for the band where you find the most energy.
By random length wire, I refer to something at least 100ft long or more (more being better).
You can try bending & moving the antenna around to get a better signal.
I would not expect to capture any microwave energies since they are usually point to point & overhead.
You might catch some FM & TV station energies if they are close enough.
I would use a sensitive diode like a 1N60 or the like. Perhaps there's a schottky diode offering a high sensitivity.
I doubt you'll power this for long unless your energy sources are strong.
You may need to investigate switching type, low dropout voltage regulators instead of what may be on brd.
Most linear regulators just waste too much energy doing their jobs & you don't have much to waste.
bc

If you're willing to spend the money, you can now buy energy harvester ics which do very little except collect energy from it's surroundings until it's charged a cap enough to power up a circuit broadcast the data and goback to sleep.

Do you know an energy harvesting ic that collects energy from radio waves ?
I can only find ics that use motion, or peltier, or solar, or nearby inductance, and so on.

arduinoPi:
I am trying to do a demonstration in which energy from ambient radio waves (it doesn't matter which frequency) is used to charge up capacitors and blink a red 3 volt 1 mA led every 10 seconds or so. Is this feasible? If so how can I go about building it.

The problem is that if you do find a frequency with enough power, there's no easy way to harvest it without
retransmitting harmonics (which may be illegal, potentially interferes with emergency services, aircraft, etc)
The energy retransmitted might only be 0.01% of the incident energy, but if that was enough to harvest in
the first place the retransmission will have a good range. Radio receivers only need something like
femtowatts to pick up a signal, to power an LED needs milliwatts (12 orders of magnitude more).

You could place a small SMT 50 ohm resistor at the output of a large dipole antenna and use a pair of
temperature sensors to detect any raise in temperature of the resistor compared to nearby - thus
demonstrating the arrival of RF energy (and a simple resistor doesn't generate harmonics).

Replacing the resistor with a full-wave rectifier of germanium or shottky diodes would allow a DC voltage
to be generated, but trying to extract much current would then inject odd-harmonics back in to the antenna.

This is difficult to do.
Whilst there is a lot of radio frequency energy being transmitted from multiple radio transmitters all around
its simply not possible to somehow add it all together and generate any power.
This is because its all AC and the phase relationships of all the transmissions are not related to each other in any way.
This simplest way and the most likley is the humble MF crystal set, consisting of a simple tuned circuit to isolate a single
transmission, a diode to rectify it , and a capacitor to charge.
But dont expect to get much energy, unless you live across the road from a 50+KW transmitter.
The longer the antenna the better, and long wire antennas work well with MF broadcasting stations.
The single largest source of radio noise is the Sun, but its totally useless as its non coherant so the energy is spread
across a wide bandwidth.

Erdin:
Do you know an energy harvesting ic that collects energy from radio waves ?
I can only find ics that use motion, or peltier, or solar, or nearby inductance, and so on.

An antenna and a diode, now depending on the size of the antenna you can absorb as much RF as possible, who's less likely to track you down for stealing microwatts of power to charge a cap?

AM probably a good source, a ferrite rod + copper coil ? you could even steal power from GSM charge it by placing it near a power supply or something...

But peltier, solar, inductance, they all create a potential voltage, so would an antenna and a radio diode, anything that produces a voltage would work.

They're getting more popular, i hope to see prices come down and then I could use a speaker and convert sound waves to energy, infact your body would generate enough heat to drive this device!

RFID works on this principle.
The “tag” is bombarded with a low freq / low level energy long enough to transmit its data a few inches to a nearby receiver.
Not something that can power any microcontroller.

Thermoelectric work by heat difference, I think in Australia your body would be the heat sink for a large part of the year! Snork.

A big problem with diodes is the voltage drop. As pointed out, 1mW into 50 ohms is only 0.6V peak, enough to turn on a germanium or shottky, but thereby wasting half the power. And a bridge rectifier doubles that drop.

Resonance boosts voltage, but at the expense of bandwidth.

Actually, there are a few projects going on where researchers are trying to use ambient RF fields to power a microcontroller, but they are -very- low power and spend most of their time storing energy, only coming on for a short time a few times a day.