I am trying to make a IR glucometer that sends IR light through the glucose solution and depending on how much glucose is in it, the arduino would get a different reading. I have the IR emitter and detector set up, but my problem is that the change in readings between different glucose levels isnt large enough. Is there a way for me to amplify the input to the arduino so that I will be able to see a larger difference?

The Serial monitor shows ~39 when the IR emitter is active and ~892 when it is off, so I'm fairly certain the emitters and detectors are working correctly. I need a way to show different values depending on the glucose levels.

I'm pretty new to arduino and electronics so any help would be HUGELY appreciated.

I would invite you to explain quite a bit more.

you really did not offer enough of the sensors to allow us to offer any help.

do you understand the concept of range ?
try to measure the thickness of a piece of paper with a meter stick (yard stick) on the floor and your paper on the desk.

have someone put in some random numbers of papers and measure again.

you can try to amplify something, but if your thing to be measured is less than the sensitivity of your instruments, it will not offer good results.

The Serial monitor shows ~39 when the IR emitter is active and ~892 when it is off,

So, what are the high/low glucose readings?

If you're reading ~39, switching to the optional 1.1V ADC reference will multiply your readings by about 5x.

Can we see a schematic? If you have a phototransistor and a pull-up resistor, a lower value pull-up will pull-up "harder" and give you higher readings.

It's easy to make a [u]non-inverting amplifier[/u] with an op-amp, but you'll need a bipolar power supply greater than +/-5V or a "rail-to-rail" op-amp.

thanks for the welcome! this seems like a very nice community.

These are the datasheets:

I believe they are both analog. When i put different materials in between them (i.e. plastics that are more and less opaque) the values change. The more opaque the plastic, the larger the difference in output.

I dont even need it to be that accurate, I just would like to see some change between different glucose levels.

I do not have a schematic, but I think it is simple enough to describe.

I'm not sure what 1.1 ADC reference means, could you elaborate?

Do you have a pen and paper and a cellphone camera? That's usually better than trying to describe schematics.

The Arduino has two options for the reference voltage: the 5V supply or a built-in 1.1V reference. 99% of programs use the supply because you're working with sensors and other things at that kind of voltage. But the 1.1V reference has the effect of magnifying small voltages.

I have to go to bed soon so can't dwell for too long.

What you do is have two pairs of emitters /detectors, both exactly the same distance apart. You put a reference solution into one (say water - but you know best), and the test solution into the other. Then the output of both go into a differential amplifier or instrumentation amplifier. The latter are easiest. You then set a gain (amplification value) with a single resistor. The effect will be to amplify only the difference between the two readings. You can set gains from 1 to at least 1000 but that can get difficult as it'll amplify you breathing on it.

See Page 19, Figure 53 of this datasheet

You then set the output bias correctly for the Arduino's ADC input range and there you go. Some of the resistor arrangements will need to be modified to incorporate the sensors, but this is essentially the solution. I'd draw you a schematic if this site featured image uploads. 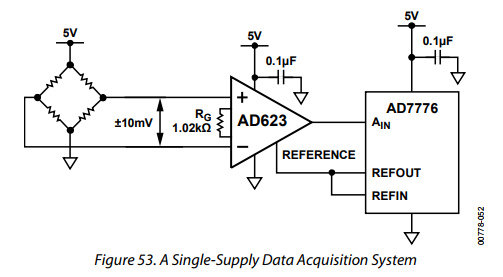 cossoft:
I'd draw you a schematic if this site featured image uploads.

It does. People upload schematics all the time.

I'd modulate the transmitter and use an ac amplifier with the receiver - just like an IR remote.

Use the "insert an image" button, the "insert a link button", or Reply and use the Attachments and other options button.

Here's an image of my Mega screw shield for example, using the image button. 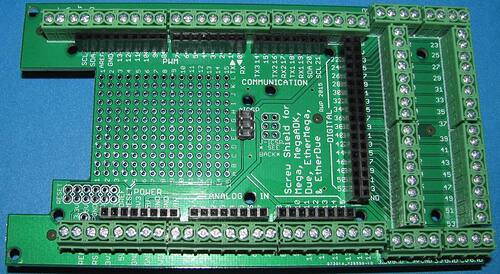 WOW! thanks everyone for all the support.

To be totally honest, I am not sure what they all do. That is just what I was given.

allanhurst, thanks so much for the idea. Unfortunately, I am not really sure what you mean or how to do it. Would modulating the transmitter be using the analogWrite() function? I'm new to arduino so that's the only way I could think of. What exactly is an ac amplifier? Could I do that with the chips above?

cossoft, firstly, thank you. I am not sure if I have the chips to make the instrumentation amplifier. Does the differential amplifier only require an opamp? What exactly is the arduino ADC input range? Is it the 0-1023 that I have seen as the outputs of the sensors? 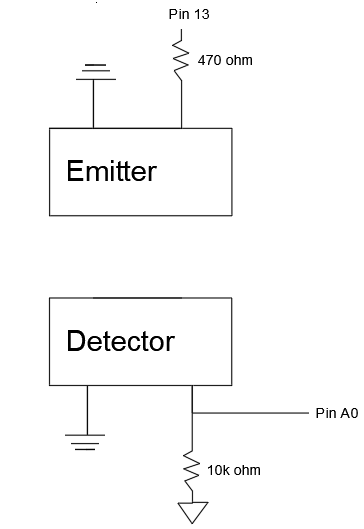 I would recommend buying an instrumentation amplifier like the one I linked to. Try Mouser, RS Components, Digikey etc. £3.79 +VAT from RS. It will be the least component count.

The ADC range refers to:-

What's the time scale for this project?

bdehority:
WOW! thanks everyone for all the support.

To be totally honest, I am not sure what they all do. That is just what I was given.

In order to get the most sensitivity out of the photometer, you will need to match the spectral characteristics of the sample's absorbtion of light to the wavelength of the light you are transmitting. The LED you describe has a peak output at 940 nanometers - that's in the near IR range. Glucose is essentially clear at that wavelength, so it will attenuate (darken) the light very little. Changing the amount of glucose will have little effect on the amount of near IR light it absorbs.

Glucose DOES absorb heavily at 3000 nm, but so does water. If you increase the wavelength slightly, you still have glucose absorbtion, but water goes clear at about 3400nm. So you should look for an LED (and detector) that absorbs in that range. Here is an example of an LED with it's maximum absorbance at 3400, where glucose absorbs, but water does not.

Selecting the correct wavelength will increase your ability to determine glucose in water much more than will merely amplifying the signal from a system that does not isolate the glucose absorption.

Good luck with your project! I find amateur spectroscopy to be very fun and rewarding.

Are you following some established procedure? Around 940 nm (the emission maximum of your emitter) water and glucose solution have almost exactly the same absorbance. At other nearby wavelengths, there is a greater difference in absorbance (970 nm and 1150 nm, for example).

As clearly shown on this web site, it will be very difficult to distinguish the two at 940 nm wavelength, even if you use a dual beam (reference and sample) differential setup.

Finally, it will be extremely important to eliminate any stray light from your experimental setup.

Wow, 14 posts in and finally someone mentioning the spectrum!

That was my first though as well - I don't know the exact numbers, but I do know that glucose will have certain specific absorption peaks - all organic molecules have distinct absorption spectra. Get an IR LED with the wrong frequency, and you won't see anything no matter how hard you try or amplify your signal.

Spectrometers as you find in the lab are indeed fully enclosed, so no ambient light can reach the chamber.

It sounds like you basically don't have a signal, so no matter how much you try to amplify what you have, you're not going to see much if anything.

I do know that glucose will have certain specific absorption peaks

For the details, see link in previous reply.

I just noticed that the experimenters measured 4.4 M glucose solution. Not much chance of an amateur experimenter detecting biologically relevant concentrations (a few mM in blood) with ~1000 nm LEDs.

Most of the Atmega chips (but NOT the Atmega 328, unfortunately) contain amplifiers for the purpose of matching input voltages to the range of the ADC.