I am going to start working on a lamp consisting of 4 RGB LEDs (common anode), a TLC5940, and an arduino of sorts (a pro mini or Adafruit's trinket pro). I've been dabbling in electronics and arduino for months now but I'm still new to it all. My project is such- a square lamp. A RGB LED for each side. I'd like to have it appear that the colors are 'wrapping' around the sides (moving). I'm guessing I need the TLC5940 in order to be able to PWM the LEDs since there aren't enough PWM pins on an arduino (currently designing on an UNO- but would like to downgrade to something more affordable in the final project - it's a gift). So far some questions I have are- I'd like for the lamp to have only one power cord- this would power the LEDs & Arduino. What kind of supply should I be looking for in order to do this? The simpler the better for me! Thanks for any advice you all have!

If this is going to be a gift, I'd suggest you shrinkify your project onto an attiny. You should be able to develop the sketch using your uno, then, once complete, get a suitable attiny chip and put it on a separate circuit board with your TLC5940. It'll be nice and cheap and will run on batteries.

Watch this for a bit of inspiration You don't mention what LED's you will be using and this can effect the final design quite a bit if they are high power ones because you will then need constant current power supplies for them.

To reduce the bulk of the power supply in the lamp use a wall wart (voltage depends on LED's). This will drop your voltage and smooth it out and may be the only power you require if everything works at 5V. if needing different voltages for LED's and arduino then use a wall wart of the highest voltage and use/build a little drop down PSU to get your 5V. Look at the schematic here and you will see how a 12V supply was needed for the LED's and 5V is tapped off for the tiny85.

Thank you both for taking your time to reply!

The attiny chip certainly could be a possibility (to help shrinkify and cheapen the project). I'll try to watch the video link provided tonight after I get in from work. I just received my tlc5940 chip today (love free samples!). So I haven't had time to tinker around with anything just yet. As far as the LED's I'll be using (I just happened to have had these on hand- I can purchase different ones if needed) - RadioShack.com Official Site - America's Technology Store The specs listed on the packaging says FW current: 30mA(green/blue), 50mA(red)
FW supply: 3.5v(typical), 4.0v max. (green/blue) 2.0v (typical) 2.6v max.(red).

Hopefully those specs help answer the question about the LEDs. Again, I just happened to have four of these lying around and I found out they're common anode so they'll work fine with the tlc5940 from my understanding.

I do think I'd rather have the lamp powered from a wall-wart though as opposed to batteries. Less hassle for the end user having to switch out batteries. This "lamp" is only meant for decorative purposes and my intention is that it would be left on throughout the day (or maybe I'll throw in a photoresistor to give the end user the option of having it on/off during day/night).

Thanks again for the replies and help! 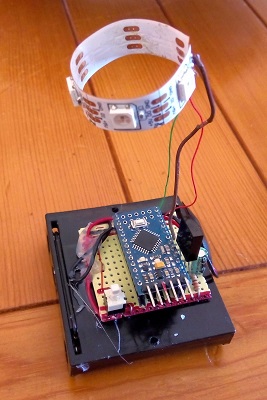