I need to develop a circuit that will keep 2 pipes in line, end to end, when they are being moved in a circle. I was thinking that we could use sa 24VDC with a potensiometer. I would then need to convert the signal to a 0-10VDC OR 4-20ma signal. I would need to to set the potensiometer so that the center of the range would give a 4ma or 0VDC. If the pipes are moving clockwise direction we would use the increase above the middle of the range to give us an increase in the output signal and if it is moving counter-clockwise it would use the decrement to increase the output. Can anyone help? Thanks!

Sorry but your explanation is quite muddled and I don't understand it.

You seem to think that 0 to 10V output is some how similar to a 4 - 20mA current loop. They are very different things.

Actually converting signals is relatively simple if you know what you have and what you want it to be.

Is this a line of pipe as in a sprinkler system used to water crops? Circular or linear?

This is for controlling the alignment on piping as it is moved to spread liquid fertilizer on a 1 acre garden. I am trying to keep the wheels in alignment and I am moving a the wheels with a VFD and 3 phase motors and I have 3 sets of wheels. The VFD can receive a 4-20ma or a 0-10VDC signal. The piping has to maintain a small amount of forward bow in order to keep it in extension rather than compression so it doesn't collapse. It stops near a fence and moves forwards and backwards until it arrives at the fenceline.

Hi,
Are you talking bout a smaller version of this? 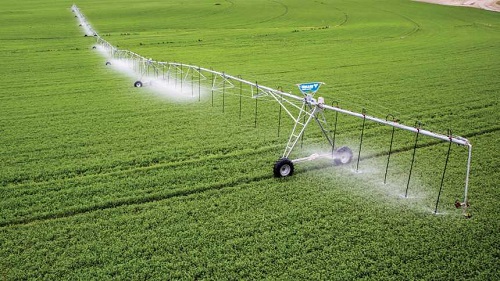 I have not built the project yet but am aquiring the items for it. Yes, what I am building is similar but is not near to the scale. I am familiar with these but want to make it move more uniform to avoid burning the plants with the fertilizer.