Any 3-D printing or reprap folks out here?

I'm at the stage to enclose my design in a plastic box. I wonder if any 3-D printing or reprap folks visit this forum. I need to ask a favor (certainly I will cover the cost) to print a box that I designed for my circuit. I'm not a fan of the radioshack boxes as I have one and it needs too many holes drilled and a big opening for LCD. Circuit standoffs are not at the location I want. I've seen people with better mechanical skills than me customize their boxes and the boxes don't look that good either. It would be nice to have someone helping/servicing the needs for decent-looking well-fitted enclosures for our finished projects to have nice homes and not naked! Thanks. 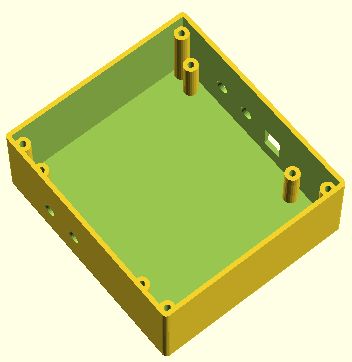 More current version with a cover! 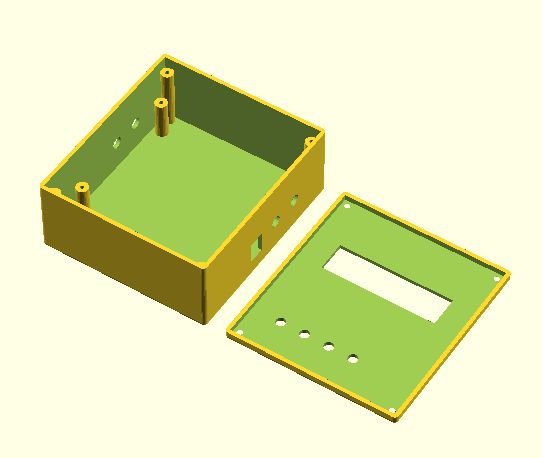 I might be able to laser cut something out of acrylic that would suit.

3D printing is very slow and very expensive because of that, laser cutting is faster but has its limitations. :)

I dont have any 3d printing experience, but let me chime in on the radio shack boxes

I cant figure out why they sell boxes that dont even fit their own boards, other than that they are just dumb plastic boxes, reasonably cheap and not super hard to get a decent finish on with some cheap hand tools

the holes are easy enough with a sharp drill bit and a very slow speed (or it will melt and, while that doesnt bother me it will leave some tool marks from cleaning up the slag, course I have a free standing buffer at my disposal)

the square USB port might be a pita, but you can start with a small hole and use a coping saw to square it off (again go slow so you dont mess up), likewise for the LCD cutout, or use a hot knife (think I payed a buck for mine at a craft store, its also the worlds worst soldering iron and a pathetic wood burner)

also check out different companies on your favorite electronics WD, there are a few companies who make enclosures with LCD cutouts that may do you fine (for a price)

Thanks Osgeld. I don't like radioshack boxes much for the same reason but if you look carefully, despite the fact they don't fit things well, they're nicely designed and made. I spent 2 days to get my box the way I posted, with rounded corners and else. My ready substitute is a cheap 3x5 card holder from shopco, made from thin soft plastic sheets. A blade will work for rect openings and a handheld hole punch will open side holes:)

mowcius, what can you do with laser cutting? Cutting sheets into shapes? How thick are the sheets? I will have to make ears on my box to hold all of them together, right? How do I deal with side openings? Thanks.

Okay, let me suggest something else along the same lines, how we used to do it (now get off my lawn, zzzzz)

goto a hobby/crafts/model store, get some balsa wood planks, I would get a sharp blade and a xacto razor saw (~10 bucks, but will slice though pcb, and you get 2 blades) while your there, they also sell balsa in cubed rods

cut and wood glue according to plan, using the sheets as panels and the square rod's as pcb / corner supports

you can cut it with a razor blade, get some cheap white or wood glue (clamp it with some rubber bands), and if you go nuts you can sand the crap out of it, putty, and do a nice paint job it will look like a apple iPrototype ;)

might take you a couple afternoons, if you do it half way tween crappy wood box, and iGloss, with wood, glue, sandpaper, sharp knife, rubber bands, optional razor saw, paint and putty

Thanks Osgeld. I'll keep that in mind. If I had a garage I would be able to house some equipment, which I need. I picked up a wooden box from a dollar store, a bit small thought.

I live in an apartment, but I do have a small back patio and an old TV dinner tray ;D

I pine for the days when I lived with a shop, but I doubt my wife would allow me to move us back in with my parents to have access to a fairly well machined wood shop :’(

he even has one of those old craftsman 3d router things, where you can cad it in their goofy software, and you store it on a serial flash card, to sneaker-net it to the (tiny) mill, and its too brutal for pcb >:(

mowcius, what can you do with laser cutting? Cutting sheets into shapes? How thick are the sheets? I will have to make ears on my box to hold all of them together, right? How do I deal with side openings? Thanks.

I can do flat stuff :P

I normally do 3mm but I can do 6mm if needed but I have to order the acrylic in.

You can do anything that can be done in sheets :p

The standoffs for holding the PCB etc would have to be made yourself or you can buy standoffs) and it would have to be glue together (or you can do some clever stuff with screws on 6mm) but as I said, there are tradeoffs to using acrylic. You can never have fast, accurate and cheap. :D

http://raronoff.wordpress.com/2010/07/27/acrylic-casing/ White 3mm. With my recommendation I do believe he is going to cap those bolts off with 3mm dome nuts painted white to match the rest of the case.

Obviously in that there was an internal (wooden) structure which had the bolts in it and then the acrylic was secured on by being pulled in with those bolts.

Laser cutting isn't suitable for everything but with a few design modifications it is often the cheapest and most effective way to do things such as that case.

That is impressive mowcius. Did you design the teeth on the plates that bite together when put together? That's a lot more area for glues to hold them together. Unfortunately my box is about 40mm thick (smallest dimension). I would have to make a different design so that they separate into 6 sides and then think of how to glue them. So assume I did go this way (6 panels), 90*100 2 sides, 90*40 2 sides, 100*40 2 sides, how much would it be from your shop to US? You can send me a PM if you like. Thanks.

Shipping is not very much, I normally include it in the quoted price.

If you want it tracked/insured etc then it’s a little more but not normally much more than 10 USD.

That is impressive mowcius. Did you design the teeth on the plates that bite together when put together?

I did not design this particular case but I have done similar things before (if I had my projects written up then I would direct you to my mini electric dragster timer) which had a few nasty angles for the LCD side etc.

After doing a few cases/boxes, you get used to how to fabricate most funny shapes

mowcius, If the overall cost is within $25 (including shipping) I will redesign my parts as six panels and buy it from you. It'd be very cool to have kids look at the case and ask "what's that part do?" Let me know. Thanks.

mowcius, If the overall cost is within $25 (including shipping) I will redesign my parts as six panels and buy it from you. It'd be very cool to have kids look at the case and ask "what's that part do?" Let me know. Thanks.

I would say that is unlikely.

From my experience, 3D printing is very expensive and I would have thought that your box would be well over $100 including shipping from somewhere like shapeways.

If you have got someone to produce it that cheap for you then I would go for it! Sounds like a very good deal.

I was not clear enough with my post. I meant if I had redesigned to only have top and bottom panels made by you with 2 laser-cut sheets, would it be within $25USD? Thanks.

Last night I have thought it through, only top and bottom plates are needed. But the bottom plate needs 8 M3 thru holes. The top needs 4. I have 5 plugs going on the side of the board. I don't think glue is best. The insertion force may be in the order of 1N. Then since it's acrylic, I don't need LCD opening, just two rect openings for 4 buttons and the power switch.

I am sending you a message. :)

I don't really know how big this thing is yet and for anyone who might happen to read this in the future if prices have changed as they do, (exchange rates included) the prices may not be accurate when they happen to look if I mentioned them here.

After some discussions, rethinking, and some web searching, I decided to drop the idea of making a 3-D box and go with laser-cut acrylic for top and bottom covers. Hope to get the covers before the end of the month and report back!

OT kinda -- can the laser power be reduce/controlled so that lettering can be etched into the plate? Think of a "label" above a switch. thanks.

if so you can paint in the back sides to make them stand out, it looks spiffy