Why bother to make this utility as the Arduino IDE can do everything?

That’s why I made this utility, simple, straight-forward and trying to have a sleek look, and to feel better when compiling a sketch and programming Arduino.

Arduino Builder is a fully standalone utility for viewing, compiling and uploading Arduino sketch file and compiled ELF or HEX file (usually bootloader) to Arduino board with Arduino serial programming interface, USBasp or Arduino ISP, without the need for Arduino IDE. This can be easily done with no more than 3 steps. When compiling is required (for uploading sketch file), the utility scans the sketch for referenced libraries and build the necessary libraries automatically.

The distribution package contains Arduino 1.0.4 core and library files, AVR GCC compiler toolchain and AVRDUDE. As only the standard Arduino libraries are shipped with the utility, in order to build with custom libraries, please place the library source code files (with identical directory name) in /arduino/libraries directory, as what is done with official Arduino IDE.

Looks like quite an effort, thanks for the contribution I will check it out. However it does not (nor can it) deal with my pet peeve that the arduino IDE no longer stores a compiled sketch’s hex file into the users sketch folder as it did long ago in much earlier versions. It’s a real pain to search out the temp directory for the strange file names it uses and to then store them away somewhere useful for future use. What procedure or steps do you use to handle your hex file storage?

With my utility, compiled hex is always stored in the same directory of the sketch.

stanleyhuang: With my utility, compiled hex is always stored in the same directory of the sketch.

Wow, nice. That feature alone is worth using your utility. Can your utility do a compile without a upload, much like the IDE has a verify option that just compiles a sketch without having to have the board attached?

The CLI can do this, simply by specifying - for serial port option in the command line. I will add this feature to GUI soon.

Just released 0.6.1. In this revision, I added a "Build Only" button to do compiling only. A pie chart UI was also added to show memory consumption for target MCU.

I'm having trouble getting your application to run on my windows XP SP3 system.

Version 6.0 Opening file explorer and click on ....GUI.exe , I get opening window of your GUI app. Select Uno board and point to a arduino sketch .ino file and then click on comm 5 (my uno board's comm port) and GUI says error uploading.

retrolefty: I'm having trouble getting your application to run on my windows XP SP3 system.

retrolefty:
I’m having trouble getting your application to run on my windows XP SP3 system.

When I try to End Process on explorer.exe (not responding) task manger kills it and then shows a new copy of explorer.exe starting and it also is not responding. As I said rebooting was the only way to get going again.

I will test it on XP soon.
It runs quite well in Windows 7.

Thank you very much, I will give it a try sometime later today.

Well I gave it a try and it's still a no go. Lock's up file explorer and can only reboot to recover. Maybe it's my machine, so best to have someone else with an XP report if it works for them or not.

I tested in on Windows XP in VM. What's your IE version? Is it 6.0? The UI (including the pie chart) is HTML based as I plan to port it to other OS than Windows.

The new release of 0.7.0 has added options for MCU operating frequency including 20Mhz, 16Mhz, 12Mhz and 8Mhz. An interesting Arduino variant (based on ATMega644pa) named Microduino+ is also supported in this version. 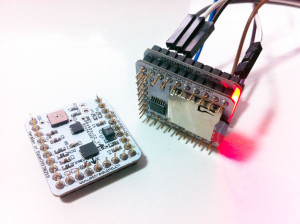 Code viewer is added in 0.8.0 and the GUI version has been renamed from Arduino Uploader to Arduino Builder as it is no longer an uploader alone.

stanleyhuang:
Code viewer is added in 0.8.0 and the GUI version has been renamed from Arduino Uploader to Arduino Builder as it is no longer an uploader alone.

this is having a bug when ArduinoBuilder-0.8.3 is used.

GUI and a hex file is able to burn to Nano3.0 correctly, PDE or INO is either no provided and no used.

however, we want simply and further user isolation and more easy, used the ArduinoUploader.exe command line tool alone, and also provided a hex file only, but it does not work.

followings command lines are not working at all,

would you please help to check what was wrong with our command line.

Hi stanleyhuang, Is it hard to add support for other processors and pinout variants?

Whenever I try to run Arduino Builder I keep getting the window below. Any idea ho to overcome this?

Hi! This is an awesome tool! However, is it possible to change the directory for the libraries but still include the standard arduino libraries? Pretty much multi-folder scanning for libraries. I (and probably everyone else) hold their libraries the folder that the Arduino IDE provides. It would be nice if as well as scanning the libraries folder inside the Arduino Builder folder, it could also scan one selected by the user and then save that preference. I tried creating a symbolic link to my arduino libraries folder inside of the library folder for Arduino Builder, but it failed.