Arduino, but with more RAM

I have suffering from RAM issue, but it does not mean that I do not know how to optimize the usage of RAM in current Arduino.

Do you guys know any other micro controller environment with higher RAM capacoty or how to upgrade the SRAM (more than 8KB) from current Arduinos?

If you want to leave the Arduino fold then there are a stack of more capable boards. Maple, Beagle etc.

There is also a RAM expander board made by Rugged Circuits, that will give to 512k.

And you do know about PROGMEM I gather?

If you want to leave the Arduino fold then there are a stack of more capable board. Maple, Beagle etc.

There is also a RAM expander board made by Rugged Circuits, that will give to 512k.

And you do know about PROGMEM I gather?

Thanks for your information. I should look at those thing you just mentioned.

There are no RAM expandable board for Arduino UNO. Right?

Yes I know how to use PROGMEM.

There are no RAM expandable board for Arduino UNO. Right?

Right, it's not possible on the smaller chips unless you just use IO to access the RAM which is largely pointless.

Both LeafLab's Maple: Maple | LeafLabs
Maple | LeafLabs
and Diligent's Chipkit Uno32/Max32: http://www.digilentinc.com/Products/Catalog.cfm?NavPath=2,892&Cat=18
Offer Arduino shield compatible boards, with more RAM and much faster processors,
using a very similar IDE and API compatible core libraries.
While the boards are not fully 100% compatible, they can work in many situations.

The maple has its own Arduino compatible IDE.
The maple RET6 board has a 72Mhz 32 bit processor with 512k of flash and 64k of RAM
LeafLab boards also support direct connection to LiPo batteries for easy battery operation.
It sells for a similar price point as the Arduino Mega.

The mpide used for chipkit supports both the AVR Arduino based boards and the chipkit pic32 based boards,
so you can use mpide to build and download sketches for both AVR and chipkit based boards.
This makes it extremely to flip back and forth between different boards using the same sketches.
The chipkit Uno32 sells at a similar price point to the Arduino Uno and the chipkit Max32 sells
at a similar price point to a Arduino Mega.
chipkit uno32 has a 80Mhz 32bit CPU, 128k flash, and 16k RAM.
The chipkit Max32 has a 80Mhz 32 bit CPU with 512k of flash and 128k of RAM.

While both LeafLabs and Chipkit boards have much more CPU power and RAM resources than Arduino Mega
they run at 3.3v and don't have the pin drive capability of the AVR processor.

Both boards are still a bit of "work in progress" as not all the libraries available for AVR based
Arduinos have been ported over to these newer boards yet.

But at least there are some alternatives out there with more horsepower and RAM for a similar price point.

Maybe you need to learn about "PROGMEM". I have a simple example here Persistence of Vision | Blinkenlight. You can find more extensive explanations with G**gle.

I have a Maple and although great with lots of complex hardware, their libraries aren't exactly as the Arduino. A lot of it is missing, but it can be ported over somewhat easily with some knowledge of C and the system.

Maple is good stuff, but very little community. To me the obvious answer is 1284P. Completely compatible with Arduino, and 16K ram. How can you go wrong? 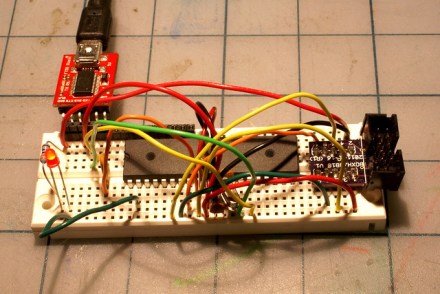 Sooner or later, the Arduino starts to feel a little claustrophobic. Your sketches start running out of memory, so you need more RAM. You want to talk serial to another peripheral (like an RFID Mod…

Problem is there's no good source of commercially available and supported boards. There are many being developed on the forums right now. A little searching will lead you to those.

As soon as I get a chance to put the ICSP header in the right place, I will make these available 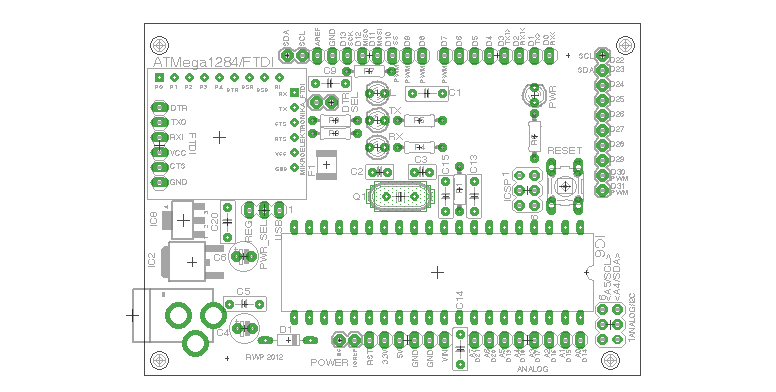 CrossRoads:
As soon as I get a chance to put the ICSP header in the right place, I will make these available

Cool board.
What is going on in the "FTDI" area?
It would be kind of nice to have power & ground next to the SCL/SDA on the right
so that you could attach a 4 pin connector to run i2c, other serial stuff, or an ultrasonic HC-SR04 sensor.
What about an auto-reset jumper?
Maybe a set of 2 holes with trace between them like is on the pic32 boards.
You can then cut the trace between the holes and solder in a 2 pin header to add an auto-reset jumper.

If there is room and you really want to go crazy add power and ground next
to each of the d23-d31 holes so that things like servos, 1 wire temp sensors, IR receivers/transmitters
could be hooked up. Most common order is G,V,(signal)

CrossRoads:
As soon as I get a chance to put the ICSP header in the right place, I will make these available

I'm using the Olimexino with the STM32 and the same core as Maple and it is pretty amazing. But like it was said, the community is nowhere near the Arduino forums. They have about 0,5% of the movement this forum has and not a lot of libraries being built or ported from Arduino. But it might get there.