There is my motorcycle wiring diagram at page 456.

I would like to cut red-black wire going from 10 (starting circuit cut-off relay) to 15-18 (coils). I have used IRF9Z34N P-Mosfet as a high side switch with no success.

Then I've decided to try cutting wire with arduino and button.

I have used a simple button program:

Its not working at all. When I press button for the first time bike begins to run like crap, then after releasing after like 2s it runs again fine, but after several presses it won't go back to normal operation.

Should i put Pulldown resistor between gate pin (13) and GDN? like 10kOhms?

Now i have checked that:
After cutting red-black wire bike still starts up, but runs like crap. May that happen because two wires are going to each coil? One 12V and one from ECU?

I think i should try cutting injectors, because only one possitive wire connects to each.

Still nothing. I've even tried connecting directly to killswitch wire to cut ignition, but nothing happened. I've connected it that way:
http://scr.hu/0a3o/dy2m7

The P-MOS transistor requires a gate signal swing between 12V and Gnd, too much voltage for an Arduino output. You need another transistor to switch the gate. Some NPN transistor plus base and collector resistors can do that.

DrDiettrich:
The P-MOS transistor requires a gate signal swing between 12V and Gnd, too much voltage for an Arduino output. You need another transistor to switch the gate. Some NPN transistor plus base and collector resistors can do that.

But IRF9Z34N has Vgs = 2-4V, then it should be enough for Arduino? When i tough gate terminal to battery + it stil doesn't cut.

I've connected it the way shown in attachment.

"rickerman" had a different case. He said that after he disconnect 12V wire his coild stops from firing, but in mine bike they still fire, but very poorly. 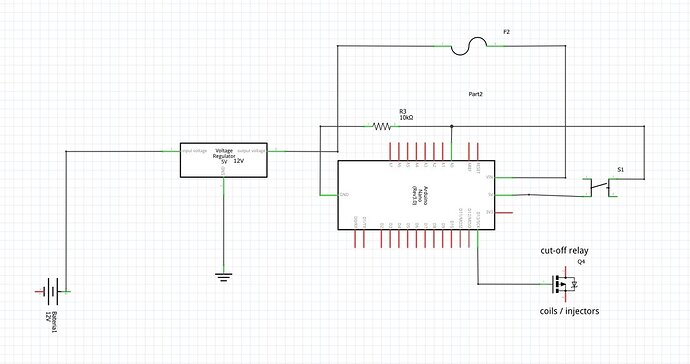 The threshold voltage Vgs is -2 to -4V, counting from source (+12V). If you short gate and source, the FET will be definitely off.

But you seem to operate the FET in reverse polarity, where the Avalanche diode always conducts. A P channel FET must have source positive and drain negative.

Hmm.. Then i'll try that on thursday.

I've connected it basing on that video:

Then in Your opinion I should connect drain to coils side and source to relay side?

The video uses logic level FETS and a 5V supply, what's within the range of the Arduino outputs. Your FET is neither logic level nor is it driving a 5V load.

I guess that the relay goes to +12V, then the source must go there.

All you need to know about mosfet switching here.

Diagram#3 is for high-side switching.
Leo..

I've send link to my motorcycle service where is wiring diagram on mine google drive in first post.

There is a problem with #3 Diagram, because if my Arduino will fail and there won't be voltage at transistor base, then mosfet wont conduct any by engine won't. Will using PNP instead of NPN transistor be a solution?

By "tied high" you mean that I should put 10kOhms resistor betweem arduino output pin and 5V pin?

I have a friend who has won the UK kart championship several times. He only uses the clutch for the start - then just rams the gears through for every change.

Hmm... Gratulations :)? What does it bring to the topic?

Anyone opinion on using LM358?

Instead of a transistor, an opamp circuit requires more resistors and other components.

Hmm... Gratulations :)? What does it bring to the topic?

well .... you could try crashing the box rather than clever electronics....

allanhurst:
well .... you could try crashing the box rather than clever electronics....

I'm not full time racer, just visiting race track like 10 times a year. I'm trying to make quickshifter just for fun and to see if it's possible to make something working better than branded ones with way less money.