05-25fri-12
Good Morning Don,
The code I'm working with (12.5.4) is posted.
I have been comparing the required timing for the vfd on pg 16 of it's datasheet, with that for the uno on the atmega datasheet, pg104 which deals with the timer counter and the output compare registers. Also using the simpler diagram in the textbook which compares the data signals with the signals on the en, r/w, r/s pins, just like for the vfd timing diagram.
I've also sent a snippet of the first part of the code which worked with the CIODIO-48 board the first time around.
I think there is correspondence with this in terms of the initiatialization sequence. It seems to me that the realization of the timing diagram in the vfd datasheet is obtained from the 'void SendDataToDisplay' subroutine; in particular the last part. Was looking at the way this same routine is supposedly realized in the Arduino code, in terms of the interactive timing of the signals on the en r/w,r/s pins and when data is written. In fact I really don't see any lines corresponding in the arduino code that would address the timing issue as is done in the CIODIO code, except the lcd_print (char*str) which I think is insufficient.
I'm also keeping in mind my ultimate objective which is for the program to sense signals for various parameters (altitude, airspeed,airpressure,mach,...) and display any 3 on the first 3 rows of the display, with the 4th used to enter new information, which is automatically sent to row 1 with previous information 'stepping down' to rows 2 and 3, row 4 remaining void for new info. 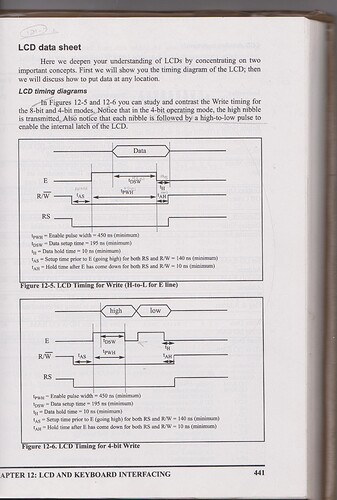 It looks like you started a new thread when you meant to tack this onto your previous one arduino for vfd - #12 by system - Displays - Arduino Forum. Either you or a moderator should delete this thread.