Hello all.
I have a problem with the Arduino Primo. After a failed upload of the sketch by OTA I have this situation: 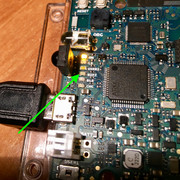 I tried everything to upload a new WiFiLink to ESP8266, still the same. What to do?

what I know, Primo can't upload a sketch over WiFi.

the esp flashing with WiFi Link is successful?

Hi,
I add the library ESP8266 2.4.0-rc1,
WiFiLink compiles without problems, but when uploading I have:

how and why did you try to upload a sketch over WiFi?

did you flash the esp on Primo before?

I have an Uno WiFi with WiFi Link. for the Uno WiFi there is a procedure to put the esp into flashing mode.

I can't find a firmware update procedure description for the Primo on archived arduino.org pages.

I was upload a sketch to the network port of the Arduino IDE.
I did not flash ESP.
On the board is the ESP_BOOT button, but it's rather to upload a bootloader (?)

Biela:
I was upload a sketch to the network port of the Arduino IDE.

was it an avr nrf sketch or esp sketch and the selected board was avr nrf or esp?

is it possible that you ota uploaded a simple sketch into esp? if yes then your only option is to flash the firmware over serial

OK, I have a AVR programmer, this is ok?

Where do you have an avr programmer?

hmmm, in my hand?

Can I use another Arduino as a programmer? For example, UNO or 101?

not for esp. put the esp in flash mode with the ESP BOOT button. push the button while connecting the usb cable (powering up the board). and the upload WiFiLink

EDIT: you may need first to upload to the microcontroller (nRF52) the EspRecovery sketch from WiFi Link examples/tools

Juraj, thanks for your reply.

I try compile (for Arduino Primo board) EspRecovery from WiFiLink and i have error:

'SerialWiFi' was not declared in this scope

Now I see that the EspRecovery sketch is only for Uno Wifi and Star Otto.

I downloaded the firmware that was originally in Primo:

But, how to compile and upload to Primo?...

EDIT: Compiles this (from ESP8266 boards) as Arduino -> Primo, how to upload?, esptool gives the same errors...

esp must be flashed over serial line. on Primo it is connected to some pins on the nRF25. I think, you need a sketch like the EspRecovery, but which copies data from Serial to SoftwareSerial on those pins.

My tests with esptool:

A fatal error occurred: Failed to connect to Espressif device: Timed out waiting for packet header

I looking for like EspRecovery for a Primo board...

Hi, the diagram shows that it is pins 7 and 8.
I upload my sketch, but esptool still show this same error: