I just started working with the Arduino and I'm extremely excited to see what it's capable of. I'm a bit rusty on electricity/electronics knowledge but I'm reading a book on the subjects and will soon hopefully have a grasp on the fundamentals.

I have a project in which I have to fade in-out a LED strip (a bunch of LEDs hooked up in parallel, so either all are on or none).

I was wondering if someone could draw me a VERY BASIC schematic that would show how to hook up the Arduino Pro Mini 5v to the LED strip with 2 power supplies (one for Arduino, 9v, one for LED strip, 12v). I already have all of the components possible (transistors, resistors, capacitors, batteries, wires, voltage regulators, etc).

The Arduino Pro Mini 5v will be powered using a 9v battery, while the LEDs work best with 8x AA @ 1200mAh each.

I know this is a lot to ask, but if someone could show me the proper way (I would draw my current schematic but I'm still learning all of the symbols so I don't want to screw it up).

Powering the Pro Mini with a 12V 120A power supply is safe, since current is pulled, not pushed.

I did that, before posting, and fried the voltage regulator (I think) on the Arduino Pro Mini. A quick spark came out of the Arduino's mainboard and it smelled like burned plastic

It worked fine with a 9V battery (that's how I know it was wired fine before), and when I swapped the 9v for 8x AA @1200mAh each (in a standard battery holder), it smoked up. Now the Arduino Pro Mini only works when plugged into the USB plug (no longer battery powered).

Like I said, I had a bunch of them laying around so I just started the project up with a new one but I didn't want to fry it again.

Do you have transistors or something actually controlling the strips (good), or are you trying to control them with promini output pins (bad!)? 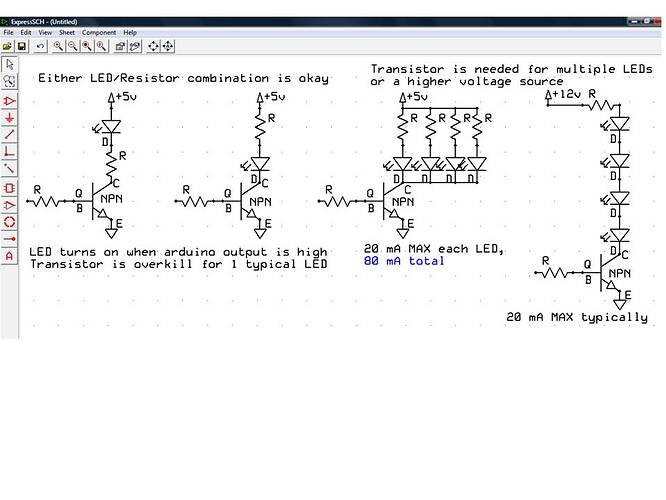 I have a transistor that came with the Arduino Uno Sparkfun board (P2N2-222A) + a 10k ohm resistor going back to pin 13.

I tried to draw a schematic (see below) of the current project. The only thing I'm not sure about is whether or not the diode actually has to be there and whether the one of the sides of the diode should be going to + and the other to -. For the diode + transistor, I copied the transistor example from (http://oomlout.com/a/products/ardx/circ-03/). Their picture shows 3.3k resistor but the printout small schematics that come with the Arduino show a 10k resistor, anyways, I tested on the 10k resister (the motor/transistor project) and it worked.

This is what I have:

Ok, get rid of the diode there.
The NPN transistor is shown backward also, the arrow is the emitter and needs to connect to ground, the collector has no arrow and connects to the bottom cathode of the LED strip. You should also have some current limit resistor in series with the LEDs to keep their current flow under 20mA.

That is the connections shown in the right hand schematic of Reply #3.

I think his LEDs are parallel. And I am suspicious that it is an automotive strip light, with built-in current limit.

I don't know why he would have smoked the voltage regulator.

This doesn't jive with parallel LEDs:
"a bunch of LEDs hooked up in parallel, so either all are on or none"
That sounds more like in series.
The current draw needed is high tho.

LucL, do you have link to the LED strip being used?