Hi I am looking to start my first arduino project. for the first step I'd like to hack an rc car. this is all new to me so I will sound pretty ignorant, but am seeking help on how to get started. I've been reading around and see that there are a variety of ways of doing this. But i
m curious to know, can I simply tear out the circuit board on an rc car and connect the arduino straight to the motors? I'v read somewhere that I may need a motor controller. Would any motor controller work?

One other thing. Again i'm learning here. i noticed that for certain functionality you need to purchase shields for arduino. Can multiple shields be connected to arduino?

I too am just starting on Arduino projects, but do know a bit about what you are trying to do.

can I simply tear out the circuit board on an rc car and connect the arduino straight to the motors?

You could, do this, but all it would do is race foreward at full power (assuming red motor wires to +5v, and black to Gnd). Assuming the motors were low power enough for the arduino to actually power.

You would need a controller because of what I said above; the arduino data outputs rarely can drive a motor all on its own (its digital data, not really power).

A more complicated, and still home make-able controller, is the "H-Bridge"- instead of a relay, it uses several transistors to do the same thing- but with a bonus- it has a "foreward" and "reverse" control. The homemade H bridge is "dangerous" though, in that it could self destruct if you enable both inputs at the same time.

A motor controller "shield" for the arduino is basically 2 "smokeless" H bridges on a chip, already built and setup to plug into the Arduino, and with convenient and marked motor attach points on it.

If you bought a cheap $5 car to hack, the circuit board has H bridges right there on the board- this is where the term "hacking" comes from- you chop up that circuit boards just right so that the H bridges are still there, and hooked up to the motors. THEN all you need to do is identify the input taps to that hacked H bridge, and hook up your arduino ouputs to THOSE.
like this guy did to make a Wall-E: 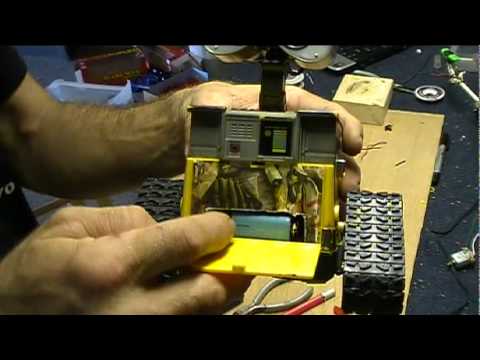 PS: a lot of what I have learned is from the books "Robot Builders' Bonanza", and "Junkbots, Bugbots, bots on wheels", and from scrolling the articles on "Solarbotics.com"- which talks a lot about home made robotics, and indeed- home made motor controllers

You are on a right path, using arduino for this purpose. yes you can connect multiple shields to arduino, and one thing more, never connect motors directly to output pins as in almost all cases it draws much more current than ardduino can provide so you should use external circuitry for this purpose…