I have a project under-going. The aim of this project is to design a micro-mouse robot that can detect black spots (representing mines) in a predefined area. The first stage of the project will involve the design of the “mouse”, including sensor arrays, motor controllers and micro controller programming.

So, I have built my micro mouse using Arduino Uno, with 4 motors/wheels connected and controlled via L298N h motor bridge. And i have followed the black line following code for it to follow a black line using array of sensors, I have 5 sensor module.

Now, my question is, how do i make my robot go up and down in a pre defined area avoiding black dots rather than following the black line. The robot should start in the a corner, go down, and up gradually going across the white surface.

Below is the demonstration via attachment : 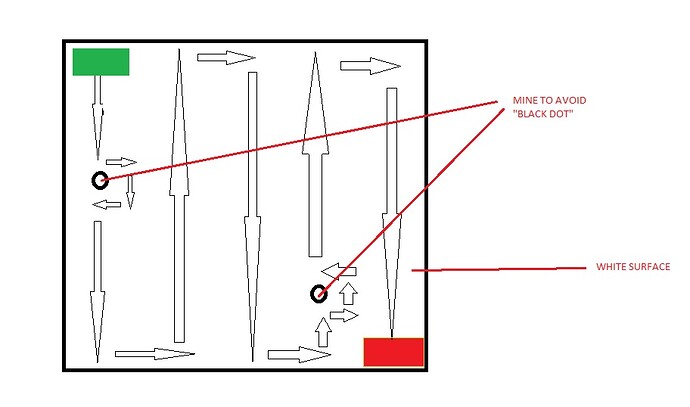 Now, my question is, how do i make my robot go up and down in a pre defined area

Mice usually run around on the floor. I really don't understand why your mouse is running around on a wall.

On a floor, up and down have no meaning.

Presuming to meant fore and aft, or left and right, what, EXACTLY should the mouse do when it senses a black dot? Your illustration shows several things that are unlikely to happen. First, it appears that the mouse is to move in a straight line. How are you making that happen?

Second, it appears that the straight line is parallel to a wall. How are you making that happen?

Third, it appears as though the mouse should make three 90 degree turns when it finds a black dot. How are you making that happen?

Fourth, it appears as though the mouse is supposed to know how big the black dot is, so it knows how far to go to avoid it. How is that to happen?

Fifth, it appears as though the mouse is supposed to move precise distances after each turn, so that it ends up back on the same line it was on. How are you making that happen?

Sixth, it appears as though the mouse knows how many paths are required to cover the room. How does it know that?

And, finally, it appears that the mouse knows where to stop. How does it know that?

When you have definitive answers to all of these questions, you'll find the programming pretty easy.

A great list of essential questions, for many robot projects

My specific add:
With 4 DC motors every motor needs its own speed control. How are you preventing slip?
Cars typically have 2 driven wheels, making things easier.