I have an Arduino UNO with an attached Arduino Sensor Shield v5.0. The Sensor Shield is being used to operate/control 5 (five) Hitec HS-422 servos. I REALLY apologies if this is an inappropriate location this post but this Group seemed the best "fit" and I am brand new to all this.

Anyway, the above works VERY well when connected to my computer's USB 2.0 port but when did connect the USB cable and connect the above to a Duracell 9V battery @ 500 mA, or a 110V to 9V adapter @ 1500 mA, or a 110V to 9V adapter at 650 mA only one of the servos moves and it does not move per the code on the Arduino. As one source powers all 5 servos just fine I am assuming there is some power problem though power source rated amperage would say otherwise.

Perplexed and open to suggestions - - - -

Unfortunately there is NO standard for Sensor Shield designs or version numbers.

Please show us a photo or a link to the one you have.

Some "Version 5x" sensor shields have a separate terminal strip that can be used to provide separate power for servos.

An example is THIS VERSION.

DISCLAIMER: Mentioned stuff from my own shop...!

My friend Xiao from Beijing designed the very first sensor shield with the idea of using the "3-pin Servo" connector for many other devices. Now there are many different versions. I make a UNO-compatible derivative design that has the 3-pin connections built in, and a 5V 2A switch mode power supply onboard that runs servos nicely when run with external power of 9 to 12 v. Info HERE.

Let us know what you have and we'll help figure things out.

Here is a photo of the Arduino Sensor Shield v5.0 I am using.

One thing I failed to mention is that when plugged into computer USB able the "13 Pin LED" blinks a couple of times then goes out. When plugged into the other power sources (and five servos don't work) that LED continues to blink. 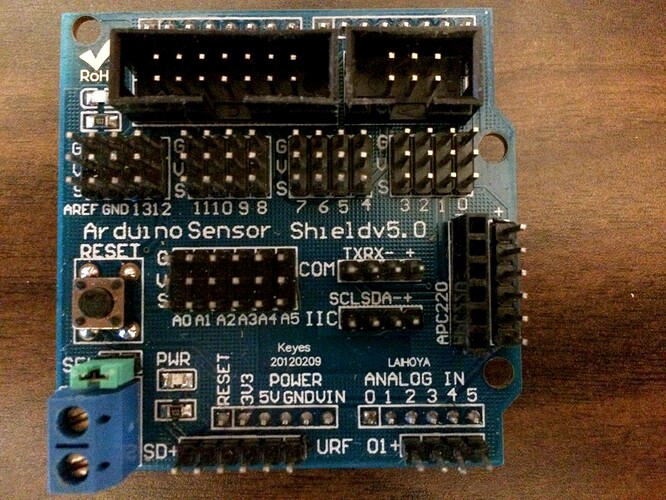 Pin1 is the TX pin of the Arduino, and shouldn't be used.

HS-422 servos have a stall current of 800mA.
Five of them need a 5volt/4Amp (minimum) supply, connected to the screw terminal of the shield.
Remove the green jumper, so Arduino power is independent of (separated from) servo power.