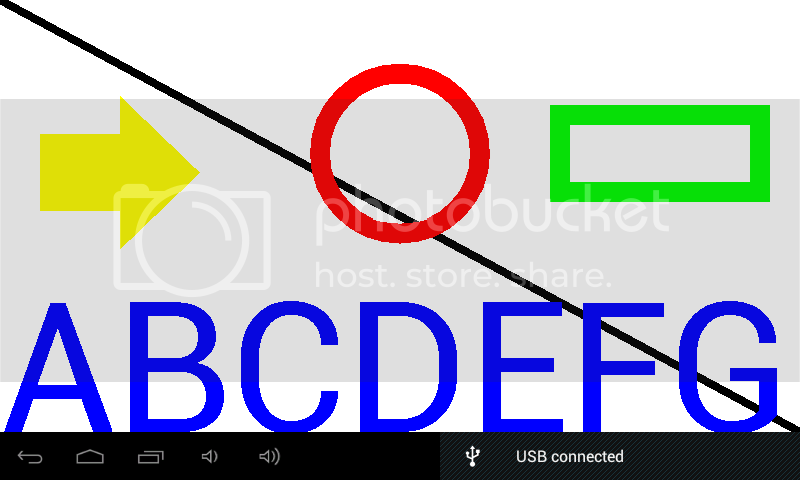 When I saw a 7 inch tablet for AUD63 I knew that it would be the cheapest way to get a 800x480 screen for arduino.
http://www.warcom.com.au/blog/product-reviews/amicroe-7-tablet-review/

I wanted to use the tablet power supply to power the arduino via the usb connection.
The tablet is configured to use an OTG cable which sets the tablet as host. HOW TO MAKE USB OTG CABLE WITH AN EXTERNAL USB POWER SUPPLY for those who cannot find such a cable in their country(like me) You need a kernel with USB OTG support. SebastianFM's kernel, here The Micro Usb connector has 5 pins inside. In...

The next step was the interface program, a very good system is firmata.
http://shokai.github.io/ArduinoFirmata-Android/

This was not really what I wanted. I just wanted to use the tablet as a display as in TVout.
http://forum.arduino.cc/index.php/topic,51867.0.html

I wrote a small application to use the tablet as a display. My code makes use of the core usb application. The project code is in the download package. I use eclipse indigo with android 3.1 SDK.
If you have this or better you can upload the application to your tablet.
I send a set of bytes to the tablet to select the drawing function required. I only chose a few
but the full range of the android graphics is available.
If you don’t have this I published the application in the google play store.
It’s free no adds just search “Arduino Usb Android Display”.

The Arduino code is in a library class and has 6 functions. 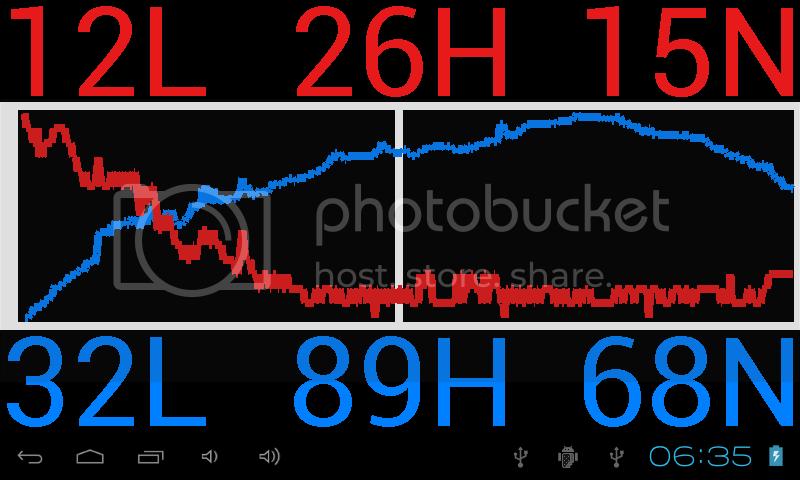 Using a DHT11 temperature/humidity sensor I put together a project.

The temperature and humidity are displayed for a 24 hour period.
The graphed data is fitted between the min and max values.

Very large letters and graph are used as its designed to be viewed from a
distance in a sitting room.

The speed limitations of the base Serial-USB program are seen with
the graph taking some 20 seconds to produce.
Though for this application with new samples taken once every 3 minutes
its quite a nice affect.
Forget about animation though.

The code is at the same download location as TempHumidDisplay.zip
I also put it into the canvas library as an example.

The speed limitations of the base Serial-USB program are seen with
the graph taking some 20 seconds to produce.

This I believe is more a limitation of an arduino clocked at only 16MHz which means that ANY I/O opp can't be any faster than 1/2 fclk, unless of course its a RISC arch, which case you might be able to achieve 1/1 fclk I/O opp.

based on example: Android-er: ADK Example: Control Arduino Due LED from Android device

The attached screeenshot shows the Arduino sketch 'simple' and the error message in the error console below. What am I doing wrong? 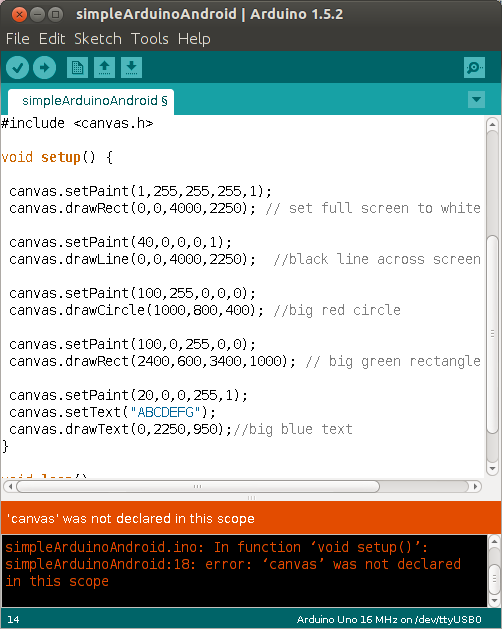 Hi check this new app for Android, uses the Android device as a TFT Display.

casdata:
Hi check this new app for Android, uses the Android device as a TFT Display.