ATMega Lite? What board is this?

So, this is how I got started on Arduino (probably not the best way). I walked into a local electronics store and said "how do I get started on Arduino?" they handed me a board...rather parts to an ATMega Lite board. I soldered it together (first time soldering! It actually works, believe it or not).
Then came the pin mapping. So far, I have not seen any documentation whatsoever on the ATMega Lite board, which makes wiring a project a nightmare (especially since I need to hook up an RX and TX wire for an external board). Does anyone know a pin mapping for this board? The only site I see that has anything on the ATMega Lite board is this page: AtMega-Lite Development Board Made By GizmosUSA.com -- the only place that sells the darn thing.
In the meantime I'll try finding the pins myself...input pins are going to be hard, though. :~

This shows the correlation between the pins and the Arduino "pin numbers": 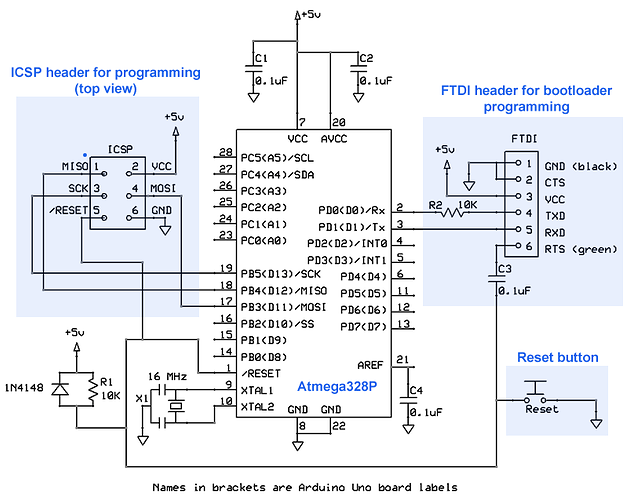 For example, pin 13 on the Atmega328 chip is D7 (digital pin 7) in the Arduino terminology.

The below link to a spreadsheet might also be useful, it shows in the far left column the 'arduino pin number' which is used in the various sketch software commands and the other columns show the AVR port.pin names that correspond to the arduino pin number for both the avrmega 168/328 chips and the 1280/2560 chips. Note that it doesn't cross to actual AVR chip pin numbers as there are too many different chip packaging styles available to show all of them, I guess. I didn't create this, just passing it on as it's been useful to me at times.

retrolefty, you are a savior!

Why it isn't the standard D7, I can't tell you.