ATTINY 84 in Arduino IDE on a UDOO: Nothing shows up in "Programmer" section

On my UDOO Quad which has an Arduino DUE built in on port /dev/ttymxc3, I installed the Arduino IDE addon for an ATTINY 84. On the "Tools" tab everything shows up as it should except in the tab "Programmer", where nothing shows up. When I click "Verify" on a blink sketch, Arduino IDE throws the error "Selected board depends on 'arduino' core (not installed). I can't figure out what an "arduino core" is. Help would be appreciated!

Please post a link to the instructions you followed to install the Arduino IDE addon for an ATTINY 84. Use the chain links icon on the toolbar to make the link clickable.

I used this tutorial:

This tutorial shows you how to program an ATtiny45, ATtiny85, ATtiny44 or ATtiny84 microcontroller using the Arduino software. These are small, cheap ($2-3) microcontrollers that are convenient for…

but I looked into more to see if I was missing something.

Generally I would recommend the far superior ATTinyCore: However, I see no reason why installing damellis/attiny following the instructions at that link would cause either of those problems.

Are you running a standard installation of the Arduino IDE or have you modified it in some way to support the UDOO Quad?

Which version of the Arduino IDE are you using?

Thanks so much for your help so far!

The version of the Arduino IDE is 1.6.5. The UDOO adds a device definition which is called "UDOO QDL (Arduino Due)", but because the internals of this device are exactly like an Arduino Due and the only thing that is different is the port it is communicating on I can't see why this device wouldn't work with the ATtiny library. I'm installing the library you recommended now, I'll let you know if that works.

So far everything that hasn't worked with the other library works.

But I have a problem that is (AFAIK) a general problem with ATTinyCore: It's throwing a "{runtime.tools.avr-gcc.path}/bin/avr-g++ - no such file or directory" error.#

I have found the platform.txt that defines this path but I haven't solved the issue yet.
Here's a discussion thread about said error: Cannot run avr-g++? - Installation & Troubleshooting - Arduino Forum

As that thread states, the usual fix for this sort of issue is to delete the Arduino15 folder and then reinstall any hardware packages such as ATTinyCore which you had installed using Boards Manager. Please be very careful when deleting files from your computer. When in doubt back up!

I renamed the Arduino15 folder and reinstalled the IDE using apt, but I get the same error. I suspect it's because I don't have the AVR Boards bundle installed, which the name of the missing compiler hints at, so I'm going to do that now.

The error has changed, it's now not looking at an empty config variable but a clearly defined path:

This path still doesn't exist though.

This error does not occur when compiling a program for the Due.

EDIT: I just noticed I forgot to apt-get update before reinstalling the IDE. That might be the problem, I'm still on version 1.6.5.
EDIT2: The apt version of the arduino IDE is 1.6.5 anyway. Huh.
EDIT3: Everyone's saying this error is because of an old Arduino15 interfering with a new one. It isn't for me.

Additional info: I'm using the Arduino IDE on the Raspberry Pi part of the UDOO, so I'm running on ARM but I don't see why that would make the library incompatible.

If you want to install the latest version of the Arduino IDE you can download it here:

The compiler is now where it is, but when I try to compile I get this error:

I'm completely puzzled as I can't seem to install the newest version. I'm going to use my Windows 10 laptop via Serial now. I've found the URL of the UDOO device which wasn't that easy because all of the tutorials that pop up in Google use the manual install method from a few years ago.

There's a bug in install.sh in 1.8.2. You can fix it by making this change:
https://github.com/arduino/Arduino/pull/6110/files

Ok, I've taken another break from studying and tried my luck on Windows 10: It's almost working!

I can upload sketches onto the UDOO from my PC, and I managed to upload the Arduino as ISP sketch. Its heartbeat on PWM9 works. However I didn't find consistent info on how to actually wire up the chip.

The documentation is a bit spartanic for an Arduino noob like me, I don't know if I actually need to upload the "Arduino to ISP" sketch and how I need to wire up the device to program it, I have found conflicting information on that. Should I start a new thread for this or do you by chance know how to wire up the chip?

Thanks so much for your help so far!

Upload Arduino as ISP sketch, then put a 10uf cap between reset and ground on the arduino being used as the programmer (to disable autoreset, else it will reset and we'll be talking to the bootloader instead and nothing will work), connections are SCK, MISO, MOSI on programmer to SCK,MISO,MOSI on target, pin 10 on programmer to RESET on target.

There is an open issue to improve the documentation in my core and add stuff like that, but I'm not really able to do it myself; I don't like writing tutorials, and I'm not very good at it either. 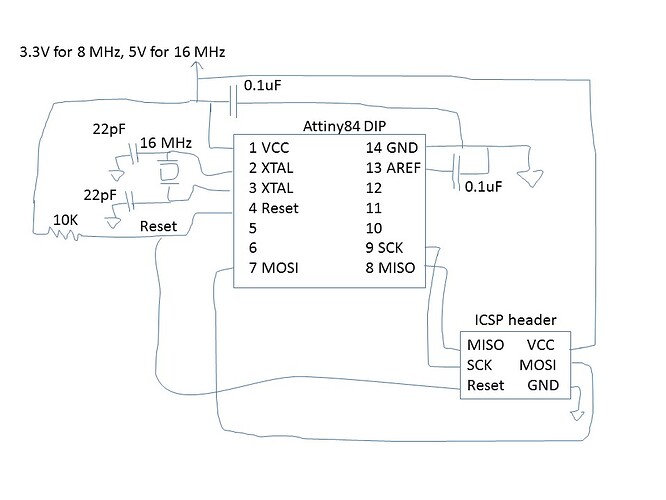 DrAzzy:
Upload Arduino as ISP sketch, then put a 10uf cap between reset and ground on the arduino being used as the programmer (to disable autoreset, else it will reset and we'll be talking to the bootloader instead and nothing will work), connections are SCK, MISO, MOSI on programmer to SCK,MISO,MOSI on target, pin 10 on programmer to RESET on target.

There is an open issue to improve the documentation in my core and add stuff like that, but I'm not really able to do it myself; I don't like writing tutorials, and I'm not very good at it either.

100uF is fine for disabling autoreset.

DTR is coupled to the reset like with a 0.1uf cap (and pulled up to vcc with a 10k resistor, forming the RC that converts the transition from high to low on DTR to a brief pulse low on reset). You need to keep reset above 0.9*Vcc to guarantee it doesn't reset; anything 1uF or above in theory should work. Using 10uF or more gives you enough margin to be confident that it's not going to reset.

Also, "exactly"? These are real capacitors (as opposed to imaginary ideal ones from an EE textbook) - most are +/- 20%. Many electrolytics have even wider tolerances than that.

Finally, might I suggest you look on ebay for "capacitor assortment"? They're not very expensive, and it's good to have a selection of caps to choose from; I'd pick up a kit with 1uF and up in electrolytic - smaller electrolytics aren't terribly useful. If your selection of ceramics is poor, I'd also get an assortment of ceramics that goes up to 10uF; if you do already have a good selection of ceramics, I'd still recommend snagging a few 10uF and 4.7uF ceramics - they're useful for wiring up regulators, since many regulators specify a specific type of cap in the datasheet). If you don't have a resistor assortment yet, can get that too on ebay for dirt cheap too.

I find most Cap and Resistor packs to be mostly useless for digital electronics. Too many values that would only get used if doing analog stuff.
Go to a site like Dipmicro.com or taydaelectronics.com and pick up 100 of the typical values:
220 ohm
1K
2.2K
5K
10K

and some 16 MHz crystals too.
That should last a little while and do most of what you need.
Maybe some buttons/switches, LEDs, small schottky diodes, whatever else strikes your fancy.