Hi all,
Delving into arduino's for the first time having read an awful lot about various projects for a while - I've got some basic programming knowledge and some 15 year old gcse electronics knowledge, so bear with me if I'm overlooking basics or being a bit dim (no pun intended!)...

I'm making a sunrise alarm clock to help with the winter mornings - I have an UNO board, 12v led strip, 'borrowed' 12v 1A power supply from an old router and a guess at a circuit drawing (attached)

I've been having a bit of a read and it sounds like I might want a MOSFET rather than a transistor for the amount of current drawn - does this make sense?

Would there be any issues powering the UNO as laid out in the diagram? I.e. just run +ve and -ve to the board as well as off into the strip / switching component?

Sounds like 220ohm would be the value for the R switching the base if I was using a transistor ( the tip120 sounded like it was the weapon if choice, but I've just read a few other posts here with mosfets recommended...)

Any comments on my circuit or advice on components would be gladly received!
Thanks
G 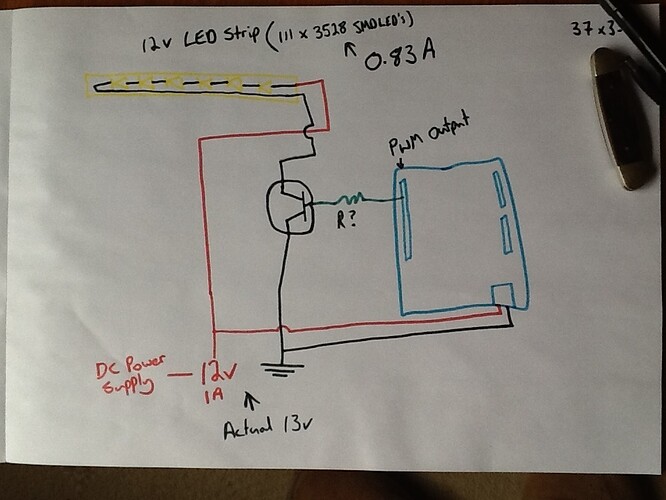 No hardware advice but a link about how to determine sunrise moment - http://arduino.cc/forum/index.php/topic,66426.0.html -

Thanks Robtillaart - a little more complex than I'm heading for, but I've bookmarked that as I can see that being pretty useful at some point (got some ideas on timelapse set-ups that could make use of that)!

I'm thinking once I've got the lighting side sorted, my trigger is actually going to be an alarm clock, we get up before sunrise over winter so would set an alarm 25 mins before wake up time that triggers the arduino, the LEDs fade up over that period and then our noisy alarm goes off... Ideally with us being mainly awake already by then!