Basic Wiring: Determine what happens when a button pressed in existing device?

I have a (probably) basic question: I’m trying to use a toy shotgun in an arduino project. The toy is electronic and makes sounds at two events:

a. Trigger Pull
b. Reload

Now. I’m, at best, an advanced novice. I have a multimeter, and I know enough to use it to determine whether or not two different points are connected.

The toy has three wires coming into the handle (attached photo, A, B, C). I learned that if I connected A and B to the board, using a basic push button set up, I could determine when the trigger pulled.

The third wire (C), I’m ASSUMING is connected to the reload event, but why isn’t there a secondary ground (or negative or…?) for that button/switch? Can these two switches share the same circuit?

Bigger picture, I guess: In general, is there a way to use a multimeter with a cable (or cables) in this context? 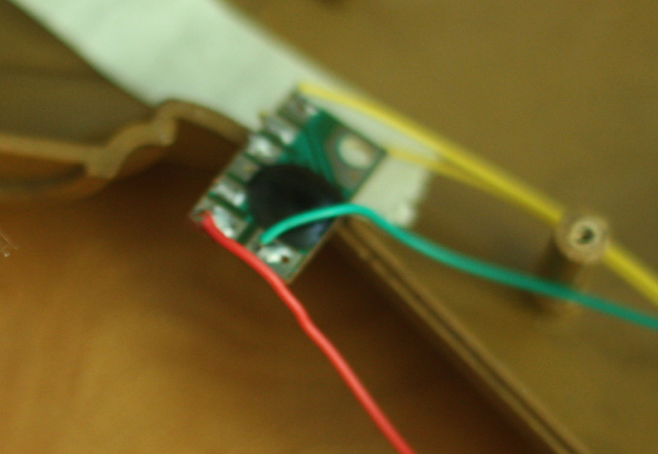 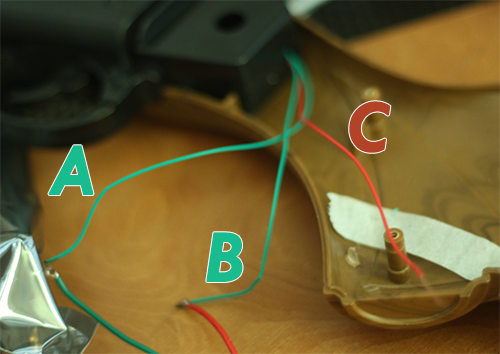 You only need one GND connection for multiple switches.

That's what I thought, so I tried connecting that wire to the board in the exact same place as the existing trigger, and it never detected any switching whenever I reloaded the toy.

I'm also a bit confused as to why they might've used a red for the ground and green for the lead, so I tried reversing them (and the original trigger fires as expected), but even then,when substituting the third (wire? lead?) nothing fired when initiating that particular trigger.

filmic:
is there a way to use a multimeter with a cable (or cables) in this context?

You know, I tried that, and had no luck. Although to be honest I'm just sort of winging it when it comes to "probing the wires."

This multimeter thinggy has a number of different modes, (although just to be thorough I tried all of them) and I think I tried all the permutations of the wires and the leads, and while the first button definitely beeped in logic mode, I never got the 2nd button to do anything.

Although if it's chained together in someway, do I have to have both of the trigger wires connected or... I dunno I'm sorta stumped.

(also since I , stupidly, removed the wires from the thing pre-emptively, I don't think I can do the voltimeter test)

That red wire may not be ground, it could be connected to V+.

Does the toy still work?

Where are the switches for the trigger and reload?

First, thanks Polymorph for helping!

Second, the triggers are in the housing.

I purchased a second gun (only like $15) so that I could test before dismantling.

Here’s my first “test.” I apologize for being kind of ign’ant. 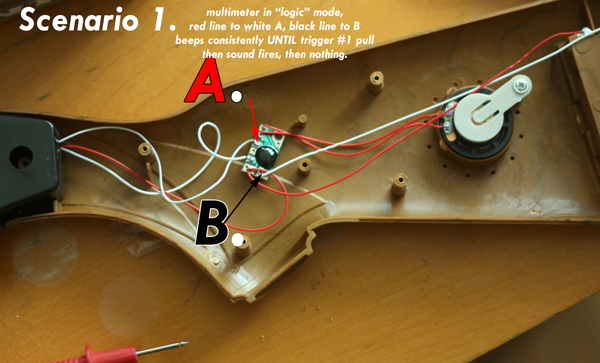 (If I move the RED lead to the contact point south west, I get the same behavior with the reload trigger.)