Projects Discussion and Showcase Education and Teaching
lastchancename April 20, 2019, 6:42am #1

This is an old statement, from the earliest days of computers and software development.

Because of that speed, it appears they are making dynamic decisions, however all the possible outcomes for various input conditions have been assessed by an analyst/programmer to implement the ‘correct’ decisions in near real-time.

These choices are written in code that determines their sequence, precedence, warnings and error conditions.

There is another old saying from pre-1960s...
GIGO : Garbage In Garbage Out

If you’re getting the wrong results from your system, it’s 99% chance the program or other inputs are ‘garbage’.

If you’re planning to succeed - enjoy, study and learn, but don’t give up!
The same applies equally to hardware and software.

Thank you for taking the time to post this. True to the adage. Although redundant and known, it sets precedence for the type of knowledge to be gained here. cheers.

Exciting things you can read on a cold/wet weekend...

Many years ago I worked with a large computer (hardware) company...
We had weekly sessions to develop our diagnostic & fault-finding skills using KT methods.

Every now & then, the session leader would invite a non-technical staff member in - to diagnose a mini-computer fault.
With zero understanding of the equipment or experience - using the fundamental KT principals on the whiteboard he/she could ask symptomatic questions of the group and eventually (correctly) identify the faulty part - and sometimes rectify the problem on more than 80% of occasions - within half an hour.

That 80% also applied to the appearance of issues in peripheral, cables or power systems - not the actual computer itself.

The art of programming is dumbing down problems so that even a computer can understand them.

computers do not do what you want them to do

Well, then, I guess my computer IS working properly, then. Damn thing certainly doesn't do what I want.

Let's say that computers do not think but in the future and so fast that technology has advanced I think I would dare to say that they could have such a mind so it has replaced us in almost all areas of life.

I have recently become interested in the world of programming, Arduino & more...

I just registered on this forum and it's one of the first topics I read, and I completely agree with you that it's all about having fun and always looking to improve.

I am working on a project to control a video projector from my Arduino Uno. My final objective is to turn off the Arduino Uno from a lamp at one point in time, then to turn it on again at another sequence. This is my first real project...

Welcome to the party...
If you’re looking for help/ideas on your ‘projector project’, the Project Guidance section has many participants that will be only too happy to lead you astray!

[[ From the third para in your post, you say control a projector, yet in the same para, you mention that you want to control the Arduino... ]]
Just a hint, when you get around to asking questions in the forum, be careful how you express the questions - so you can get more accurate help - faster!

bkucenski:
The art of programming is dumbing down problems so that even a computer can understand them.

A computer doesn't "understand" anything other than instructions. There is no sentient understanding of your issue. It blindly processes data based on predetermined rules programmed in or provided by metadata.

Programming languages and computers are like cardboard boxes and literate monkeys. When you write your code out, it's like setting up a bunch of boxes with titles written on the side so humans can understand what the box holds. If you look in the box, there are instructions in monkey-speak for the computer monkeys to do. You stack up your boxes and the computer monkeys obey the instructions. They don't understand your human-talk, only the monkey instructions in you programming boxes. The monkeys do exactly what you set up for them, but they don't understand you.

Or to put it another way: no, you have not discovered a compiler bug. 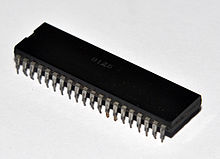 A gate array is an approach to the design and manufacture of application-specific integrated circuits (ASICs) using a prefabricated chip with components that are later interconnected into logic devices (e.g. NAND gates, flip-flops, etc.) according to a custom order by adding metal interconnect layers in the factory. It was popular during upheaval in semiconductor industry in 80s and its usage declined by end of 90s. Similar technologies have also been employed to design and manufacture analog, a...