I use my iphone to control my home automation. I use my arduino mega + ethernet shield as HTML web server and I connect to it in my home and outside by a static domain.

At the beginnin, all the controls was inside one web. At the end, I did different webs, including a index web for overview the whole home automatiun status.

I don't want to use an specific mobile language of programming (android, iOs, etc...) because I want it to be used in all the gadgets.
However, I would like to improve the visual performance in order to put more information in less space, and at the same time, to reduce the time spent by arduino sending the WEB.

Here you can find some snapshots of what I'm using nowadays: 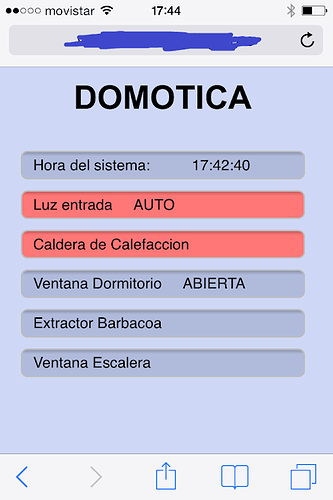 Section of outside light:

Hourly program for the heating system:

Configuration of the window sunblades:

What is the best option for me?.

warloofer:
What is the best option for me?.

Arduino have launched the Yun, which ties an Arduino to a more or less standard Linux SoC; complete with enough CPU and RAM to run a fully fledged PHP enabled web server. The Yun was designed exactly for your purpose you describe and provides you the potential for a single board solution. I have no idea how good or bad the Yun is, as I don't have one yet. You might want to make enquiries in the Yun forum.

If the Yun is too expensive, there are other GPIO friendly SoCs running Linux, such as the Raspberry Pi and Beaglebone Black, both of which I do have. Apart from the cost, the RasPi and BBB both offer even more CPU and RAM than the Yun. The downsides are another board, more power needed to run them and possibly the learning curve of an additional programming language.