I am trying to use a BNO055 sensor to an Arduino UNO. Double sure that I have made the correct connections between the sensor and UNO.

I have downloaded the Adafruit_BNO055 library and tried to run the "rawdata" example file.
Unfortunately the BNO055 doesn't seem to be responding.

I get the following message in the Serial Monitor.

Surprisingly, I have checked most of the forums and I haven't seen anyone getting this error on Arduino Uno.

Any help on this issue would be very helpful.
TIA

Do you have the Adafruit breakout board? Please take a picture of your wiring and post it.

i'm getting the same error, here's my picture: 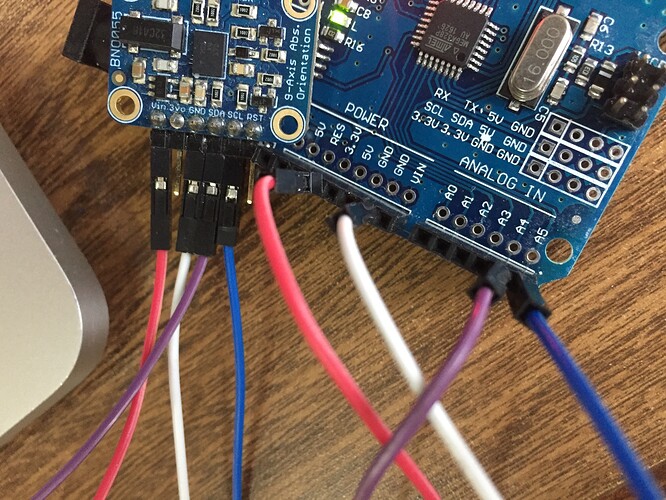 Maybe run an I2C scanner to see if you can't get the module's bus address?

I see you have connected the 3.3volt pin of the Uno to the Vin pin of the module.
That could provide an unstable ~3volt to the module.

Not sure why Adafruit lists Vin as 3.3-5volt.
They should have listed it as 3.5-5volt, since the 3.3volt regulator on the board could drop 0.2volt.
I would connect Vin of the module to 5volt of the Arduino.

This might have nothing to do with your problem.
Leo..

ya, i've been switching between the 3.3V and 5V and get the same results. But i'll keep it in 5V from here on.

but mostly it hangs on:

My trick for getting the address is this: have a different sketch uploaded to the arduino, unplug and replug the usb cable. upload the i2c scanner sketch. Afterwards it'll confirm the 0x28 address, and wants to test again and that's when it hangs. Even after closing/opening the serial monitor, uploading the same sketch again, it still hangs but maybe that's the nature of the scanner.

And then after this, if i upload any of the adafruit bno055 examples, the serial monitor will hang on:

it isn't until i unplug+plug the usb cable do i get the original error, which in that case i can reupload the i2c scanner and start the whole process over again.

Try a new set of wires before you dig any deeper.
Leo..

new wires, same result. also tried on my Windows machine to see if anything was different (was using Mac before), the results are the same with Arduino 1.8.3. Also trying with a brand new Arduino Uno, a mega, a due, a Yun, a esp8266, and two different bno055 sensors: one from adafruit (which I have gotten to work before) and a new one called CJMCU-055

The I2C wires are short, and not connected to a breadboard with e.g. other I2C devices?
Asking, because the wires to the module seem thinner.
Leo..

direct connection between sensor and arduino. the photo and it's blurry perspective/focus is what makes them seem fatter.

Did you try a different Arduino?

Tried with all the arduinos i listed before, now i'm currently using a Mega 2560

just hooked in the 3.3 to the ADR, and went through the steps again, and got it to say 0x29, uploaded the rawdata example from adafruit's bno055 library and got the same error as the original post.

Maybe wise to post this problem on the Adafruit forum.
Leo..

I have the same problems that you mentioned. Once the Serial Monitor begin, it only shows "Orientation sensor test" and after that, nothing.

A week ago I faced the same problem with a time-of-flight laser sensor VL53LoX but finally after 3 days, i realize that the problem was on arduino.

This time I really dont understand where the problem is. I tested with 3 arduino Uno and one Mega 2560 and the results is always the same. Absolute nothing...

Power_Broker:
Maybe run an I2C scanner to see if you can't get the module's bus address?

I have the same problem with a GY BNO055 breake out. I ran the I2C scanner sketch and it doesnt find the device. It finds other devices, but not the BNO055.
I noticed, that the address selector pin was wired to gnd. This issues I2C address 0x28 to the chip. (instead of 0x29) for a pulled up address pin. There might be the problem in Your case, try it out !

I`ll have to buy an other breake out.

GregFinger:
i'm getting the same error, here's my picture:

Could there be a boudrate miss match ?

Same problem with a chinese GY-BNO055 module, can't start it. Tried with Uno and Nano. Is there any way to check board without oscilloscope?

Power_Broker:
Maybe run an I2C scanner to see if you can't get the module's bus address?

Hi, I am using BNO055 shuttle board (with application board) with Arduino connected via i2c and get the same message.