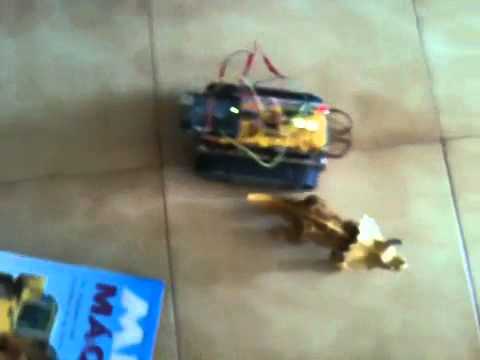 Breadboard tracked vehicle. The RC controller is made with an Arduino NANO (inside the wooden box) and a 12 keypad. The vehicle uses a Pololu RP5 chassis powered by 6 AA 1.2 batteries. An arduino reads the digital RC signals and decodes them to drive the two motors using a L293D chip. A weekend project, again trying hard to get my sons interested in electronics (and technology in general) instead of waisting time in front of the tv

Writting the codes for the arduinos was fun and the RP5 is amazing, but I'm not so happy with the L293D that tends to use power from the logic inputs and +5V supply. This can be very dangerous. Next step will be a better motor controller.
Comments are welcomed !
I really like the breadboards so please don't be too critic with that

What did you use the the radio component?

The first version was powered by an Arduino nano, it fitted nicely in the breadboard. But the 5V out of the nano was used as the logic power supply for the radio receiver and 293 chip. That was too much for him. I think that the 293 uses too much current from the +5V line, I would expect only a few mA. So after a few minutes the nano was destroyed so I had to reuse an older Arduino board. This second version has a 7805 to power the +5V line from the 6xAA batteries, and it gets slightly hot. I'm looking for a better solution, perhaps a 298 based circuit or one of the pololu breakouts that seem to be better. I would like current sensing to detect colisions.

TeslaFan:
What did you use the the radio component?

The first idea was xbee but it is expensive. I found on ebay a RX-TX pair, really cheap, that works well with the virtual wire library, if you want I send you the reference.
However I would like it to be bidirectional, so if you have a better solution please let me know.