can I get analog (byte) value from dfplayer output?

I have a project I'm working on where I am going to trigger sound effects from a dfplayer mp3 player module. The audio is going to be fed to a speaker, possibly with a small amplifier (if it needs to be louder).
But I would also like to see if there is a way to use the amplitude of whatever sound is coming out to trigger other effects. (such as an analog led 'fade/dimmer' effect and possibly moving a servo to open-close an animatronic's mouth when playing a file with words)
I'm not entirely certain what the output of the dfplayer is or how much juice is running out of it. I wouldn't want to damage an input pin. Can anyone let me know if this is possible and how to go about getting an analog value (0-255) from an audio source such as the dfplayer?

Can anyone let me know if this is possible and how to go about getting an analog value (0-255) from an audio source such as the dfplayer?

You'll need to bias the input (see attached schematic) because the Arduino can't read the negative half of the audio waveform. The Arduino can be damaged by negative voltages an/or the negative half of the audio waveform may be damaged/distorted. As long as the DF player is running from 5V, it can't go above +5V. (And it only goes negative because there is probably an output capacitor to filter-out the "DC component".)

With the bias, silence will read about 512. You can optionally subtract-out the bias and either ignore the negative values or take the absolute values. 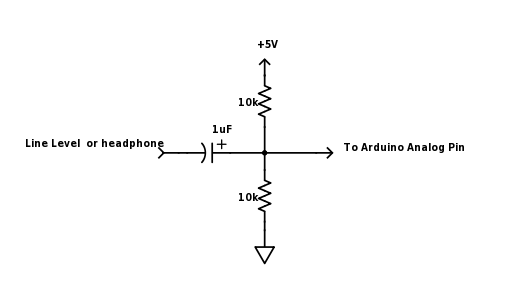