Cannot Upload Sketches to Due R3-E

I'm using lots of Uno's in my designs, but I'm having a real tough time getting the Due to upload a sketch.

I purchased one Due locally here in Toronto, and I noticed the "L" light was not blinking when I first powered on, although the Windows Device Manager reported "Arduino Due Programming Port" on Com 9.

Arduino IDE found the board and I selected Com 9. Reading Board Info showed "Unknown".

Long story sorry.... I used board manager and uploaded the core. Still the Due would hang when uploading a sketch.

I replaced the board with a second Due ( same local source) and the L light was flashing, and the Board Info now shows "Arduino Due". The Board manager reports the core as installed.

But the IDE hangs when uploading a Blink sketch to this board as well. I held down the "Erase" button and tried resetting the board, but always the IDE hangs during an upload.

Do I just have 2 bad boards? Any suggestions much appreciated!!!!

I am running Linux and not Windows, but the selection should be similar.
Did you select "Arduino Due (Programming Port)"?
Did you connect the USB connector to the USB port closer to DC power jack? 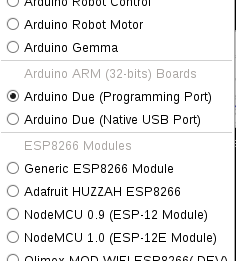 I have 4 working Dues and two that I killed, after installation via Board Manager most times I do not have problems in flashing a sketch. Sometimes the Due ports change (ttyACMx with x in {0,1,2,3,4,5}) during work. Stopping Arduino IDE and restarting resolves the issues in those rare situations.