I've been searching for a "Radiation detector" and I found this one:

but it's kinda expensive for me, I searched for cheaper ones and i found on ebay
"kit Geiger nuclear radiation" but they come without the "Geiger tube". 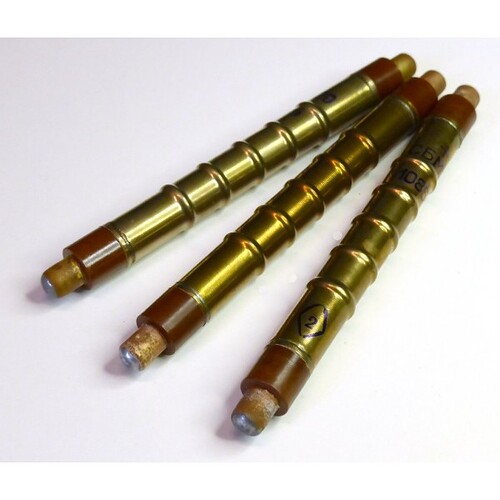 What sort of radiation are you after?

A GM tube will mainly detect gamma radiation. For beta or alpha radiation you need a different sort of tube.

I used a 3V mains transformer wired up backwards to make one in 1986 for a BBC computer. Attached is the diagrams and the words are here:-
http://www.doc.mmu.ac.uk/STAFF/A.Wiseman/Acorn/BodyBuild/BB86.html 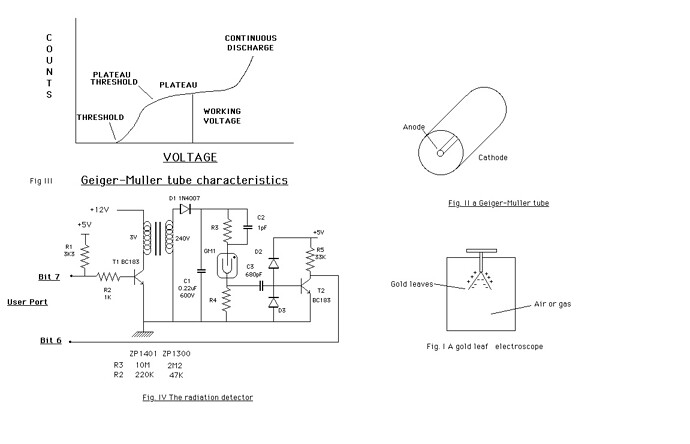 As i know a nuclear reactor emit Gamma radiation or a nuclear bomb.
GM tube, yes needs high voltage but what about the above circuit ? Doens't looks like to have high V transformers.

Its my 1st time in that kind of subject so I don't know a lot. What exactly I need is to detect nuclear reactors radiation as I know it's X and Gamma. Is there a possible way to separate X and Gamma ? and get the
value of both?

Detecting "radiation" depends on the kind of radiation, and how far away from it, you are.

If you want to detect radiation from a nuclear reactor, how far away are you ? They are designed so that the radiation is not supposed to come out of them.

If I suspected you of concealing an illicit nuclear reactor in your shed or keeping a nuclear powered submarine in your swimming pool, here's some of the things you could try:

(a) detecting abnormal amounts of heat. Use "night vision googles", a camera with IR-sensitive film, or similar methods. "infra-red" rays are a kind of electromagnetic radiation. Activities such as indoor marijuana growing can be detected this way, as can nuclear-powered submarines if they are not deeply submerged.

(b) If you want to detect X rays, you could use X-ray film. Keep the film in a light-proof cover. Put the film on an easel or music stand facing the suspect source of Xrays. Place an object of distinctive shape which is impervious to x-rays ( such as the bones in your hand ) in front of the x-ray film. Then develop the film. If the shadow ( or inverse shadow ) of the distinctively shaped object appears on the film, then it was exposed to x-rays.

Electronic detection devices work on either the photoelectric principle or the ionisation principle.

The ionization principle is the same, but uses a gas.

GM tube, yes needs high voltage but what about the above circuit ? Doens't looks like to have high V transformers.

It is possible to create high voltages by rapidly switching various combinations of diodes, capacitors and inductors. You don't have to have a transformer. The current required is very small. The purpose of the high voltage is to create an electric field to cause the electrons knocked off the gas atoms by the high-energy photons to flow in a uniform direction and create a detectable current.

GM tube, yes needs high voltage but what about the above circuit ? Doens't looks like to have high V transformers.

Over at the right hand side, I can see an inductor, and some high voltage diodes and ceramic capacitors arranged as a Cockcroft–Walton voltage multiplier.

If that part of the circuit doesn't generate a high voltage, I will eat my hat. 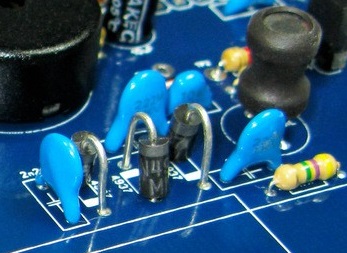 The GM tubes from the picture in the first post are often very old (NOS, New Old Stock) and air has got in them. This worsens sensitivity unpredictable.

With cheap GM counters it's not possible to tell what radioactive elements cause the radiation you detect,
or what sort of radiation it is, but you can detect changes in radioactivity over time.

Maybe this is interesting:
Geigercounter

I ran out of my monthly allowance last night just as I posted this. Fortunately most of it was automatically caught on the "drafts" section of my account. Today, being another month, I have a whole lot more allowance.

As i know a nuclear reactor emit Gamma radiation or a nuclear bomb.

That is a bit of an over simplification.

Is there a possible way to separate X and Gamma

A GM tube will only detect very high energy X rays. There is a way to distinguish the energy of the rays by using a circuit known as a kick sorter or to give it it's proper name a "pulse height analyser". This digitises the pulse coming from a detector and increments a count in a bin according to the size of the pulse. This then gives you an energy spectrum of the radiation and you can identify the source and even the element causing the radiation.

I have not seen a kick sorter since the early 70s and then it was quite large, occupying three full racks in a 19 inch floor mounting rack system. There is no reason what that can not all be put onto an Arduino but I have not seen any one do it.

You can make a scintillation counter although normally this requires high voltage for the photo multiplier detector. This project looks interesting as it uses a camera:-

DIY Your Camera Into A Radiation Detector – TechCrunch

Here's an interesting little project that anybody with some foil, gaffing tape, and a scintillator can do. It'll let you see for yourself the natural radiation associated with elements like 40K Potassium, and of course any radiation coming off things...

Hi, Im back after a long time.

Can you give me some links of compatible arduino (Geiger) Radiation detector/sensor, a cheap
and accurate one will be nice. I need it to be 100% compatible with arduino be able to read data..etc

I thought that is what I gave you in reply #1.
Sure it was made a long time before the Arduino existed but all it uses is a PWM output to drive the inverter and a digital input to record the clicks.

a cheap and accurate one will be nice

What do you mean by accurate? All GM tubes have a dead time, that is a time after detecting one ionising event before another can be detected. Also they all have an "effective aperture" equivalent to the area of the detector. Finally they all have a detection efficiency, that is the ratio of detectable events to events that actually cause ionisation.

I need it to be 100% compatible with arduino be able to read data..etc

Not sure what that means either? All a GM detector will do is produce clicks or pulses, what you do with those pulses is up to the software. Apart from making sure those pulses are in the range of 0 to 5V then compatibility does not enter into it.

Accurate I mean to be actually accurate with the radiation detected, I never used one so that's why i said
accurate

What i mean by compatible with arduino is to be able to use the device with arduino and have a already
software example without problems reading the actual radiation (in rads as i know) or how else the radiation
is readed (or divided in gama or x) need to read more about it.

I don't need a DIY or a homemade, i need a ready one as i posted the 1st photo, i tried to search but they are
80$+

alx
gave me a link

but i can't find it anywhere on ebay or aliexpress, that's my 2 main online shops that i use.
I don't need it with LCD just the circuit/tube and a example with arduino.

All you get out of a GM detector is a a click. Converting that into rads is not possible until you know what sort of radiation you are receiving. Those that claim to give an output in rads ( or any other measure ) are lying.

I think you will struggle at that.

All you get out of a GM detector is a a click. Converting that into rads is not possible until you know what sort of radiation you are receiving. Those that claim to give an output in rads ( or any other measure ) are lying.

So then how i get the radiation reading if i got only clicks? I've seen the devices which have a
LCD they have some kind of data what's that data?

Domino60:
I've seen the devices which have a LCD they have some kind of data what's that data?

There is some kind of radiation measurment.

So one click per hour or 100 clicks per second are the same thing and of no relevance?

Here is an example of a working beta radiation detector that you can build in a few minutes at no cost.

There is some kind of radiation measurement.

No that is all a GM tube can give you. Each click is one event, the more events per unit of time the more radiation there is about. What it can not do is tell you how much "energy" is represented in those clicks.

Read how it works here:- 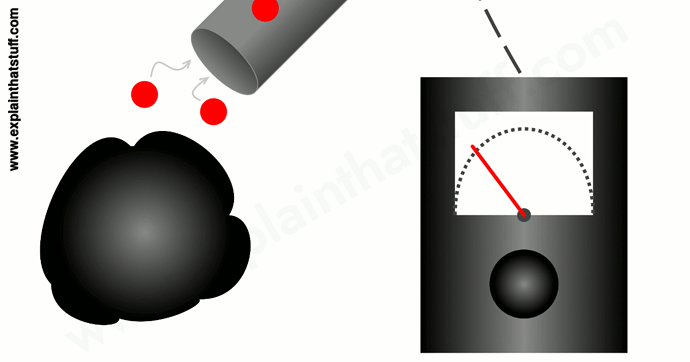 How do Geiger counters work?

A simple guide to how Geiger counters detect and measure radiation.

Incidentally they were working in my home town of Manchester in the UK when they did most of their work.

Converting that into a measurement of radioactivity is only possible when you know the source of radiation. The units are defined here:- 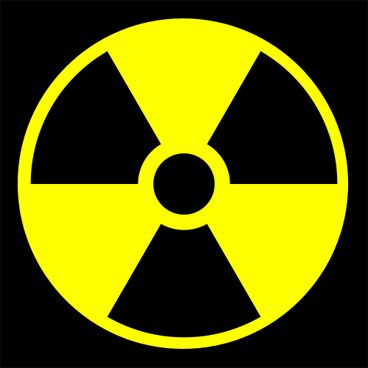 A guide to terminology about radiation exposure

But basically you have not said why you want to detect radiation and what you want to do with that information.

There is some kind of radiation measurment.

You really need to do some more homework. GM detectors typically read out in CPM aka counts per minute. The counts are of the cascade discharges in the GM tube, and the "clicks" are the discharge events run thru an audio amplifier to a speaker on the GM device. You might be better off looking on ebay or surplus sites for used detectors.

There is some kind of radiation measurement.