Church tower of Utrecht in the mist "drone tv"

A really nice view of The Dom tower of Utrecht in the mist.

Now I know what I want for X-mas

Rob did you forget to attach or link?

robtillaart:
A really nice view of The Dom tower of Utrecht in the mist.

Now I know what I want for X-mas 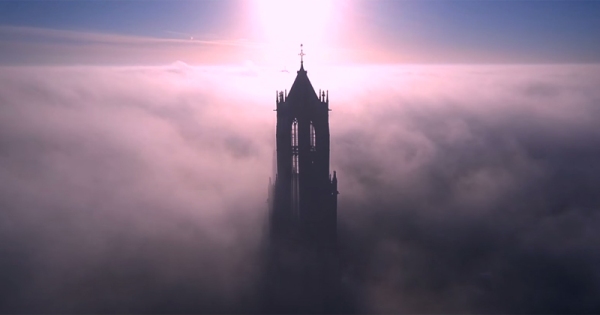 Breathtaking aerial footage of the Dom Tower of Utrecht on a foggy day. At 112.5 metres (368 feet) in height, Dom Tower is the tallest church in the Netherlands. The Gothic-style tower is th…

Stunning... Air Traffic Control must have crapped themselves

JimboZA:
Rob did you forget to attach or link?

JimboZA:
Stunning... Air Traffic Control must have crapped themselves

The Dom tower is about about 110 meters, so just within limits.

I have been looking at the Phantom 2 for the last few months wondering if I could justify buying the thing and also watching the steadily increasing heath/safety/privacy concerns stirred up in the media that make me think that I would not be able to (legally) shoot interesting footage.

If you're flying for fun, and you keep it within line of sight, it should fall under normal RC aircraft rules. If you're flying FPV or for pay, then the FAA will probably want a say in it.

As for the number of recent near misses, I believe one of two things is happening.

Ah, the Dom tower, I have climbed that to the top more than any other tower, at least 6 to 8 times .
I even timed myself from the bottom to the top as it is a fair climb running most of the way, even up through the narrow pillar that takes you to the roof section.

I have fond memories and love Utrecht when ever I leave my island home of Van Diemen's land here down under.

Rob, maybe you know my uncle there in Utrecht, Bart Bakker who you will find at Proto-Space, playing with 3D printers and laser cutters?

I live ~80km from Utrecht, more near Eindhoven, seldom visit the city of Utrecht (I do like the old inner city), never been to proto-space there, sorry

I live ~80km from Utrecht, more near Eindhoven, seldom visit the city of Utrecht (I do like the old inner city), never been to proto-space there, sorry

Rob, I'm planning on visiting the Netherlands next summer. I want to go to Pemerend where my ancestor, Joachim Best, lived in about 1750, to see if I can trace back any further and to look at the countryside around there and possibly see where he lived. He was a farmer/farm worker. I'll be driving. Any suggestions as to other places of interest around there? I know that Gouda is nearby.

Volendam is 10KM away, it is touristic but shows an old dutch fishers village.
Gouda has a old centre, it is not that big but beautiful (if you like architecture)
Similar might be the village of Delft.

The island Neeltje Jans in the province Zeeland, shows the Delta works, you can walk into one of the bridges.

If you're interested in 2nd World war there is a Museum between Son and Best and you might want to visit the John Frost Bridge in Arnhem (movie a bridge too far, operation Market Garden)
(given your last name you should visit Best

Sorry, of course I meant Purmerend.
Although my name is Best, I can find no family connection to that town and I've traced back to 1750.
I suspect it's more likely that my ancestors were originally what we would now call cowherds (US cowboys) and what were then called 'keepers of the Beasts' which was corrupted to Best, as it was in the UK. But I've no hard evidence either way.
I know of the town of Best, famous for clog (Klompenshoen?) making, but I've been to the Netherlands twice and neither time did I manage to get there. Maybe I will this time.
I guess that the best place to find records would be at Purmerend Town Hall, or would those archives be held more centrally, like in the Provincial capital of Nord Holland? I'll obviously need to make an appointment with the archivist before I arrive. I hope they speak English, as my Dutch is limited to "Danku vell" The last Dutch speakers in my family were my great grandfather and great grandmother, who came to London from Amsterdam, in about 1850. I think they may have eloped, as they were married here.

I've been to Vollendam, about 30 years ago, and if I remember correctly, the women dressed in traditional costume to welcome the tourists. A nice place. I also went to Delft and saw the pottery. Also a nice place. I might go this time to Neetje Jans, as I've not been there before. Thanks for the recommendation.

The first time I was in the Netherlands was about 50 years ago, when a friend and I cycled from London to Dover, and from Ostend to Rotterdam, Amsterdam, all the way to the very North of Holland, cycled (blown, actually) across the Eiselmere(sp?) dam, all the way back down through Eindhoven to Ostend and back to London. I doubt if I could cycle to the end of the road these days.

In the Netherlands 75% speak English quite well, it is mandatory at schools.
So I expect that people at service desks should be able to help you.

The ijselmeerdam I do not know by that name, you might mean the afsluitdijk?

don't know if it is your GGGGgranddad

Joachim Best could be written as Jochem Best too in archives.

The ijselmeerdam I do not know by that name, you might mean the afsluitdijk?

I mean the long dam that separates the Ijselmeer from the North Sea.

don't know if it is your GGGGgranddad

Wow! Thanks very much, Rob. Yes, that's him. There's much information there that I didn't have. I didn't know, for instance, that he was married twice, as I only knew about Roosje Leon, who was my GGG grandmother.

Joachim Best could be written as Jochem Best too in archives.

Yes. I have him recorded under both names.