Hello! Me and a friend are going to make a project in school for 2 weeks. We are thinking about connect our arduino to a coffeemachine to connect it to the wifi via an wifi-module. Since we are quite new to arduino we are not sure how to come around.. Are we able to connect it to wifi with an:

Also, are we able to connect our phone to it in any way? Thanks :)

Yes, ESP8266's are a great solution for Arduino web connectivity. Lots of tutorials exist for them. It's a little annoying how they communicate over serial, when the '328p only has one serial port, which is also used for programming it. So you'll have to use software serial, or disconnect the wifi while uploading the sketch to the Arduino. I'd have the arduino running a simple server that can return status, and take commands.

For phones, you could also do bluetooth - but those modules also use serial, which starts to get awkward if you also want WiFi (if you're using '328p based board - if you're using one based on something with more than one uart, this of course doesn't apply). I'd probably just use the wifi/http server method though.

You should also figure out what you want your device to do - presumably you want it to interact with the coffee maker somehow. For example, you might want temperature sensors, to see if the coffee is still warm (these are also an "easy" way to find out when the machine is running without having to touch line voltage). Or light sensors (maybe you could rely on the fact that coffee is dark to detect coffee level?). Or motion sensors, to alert you to someone taking the last cup? And you'll probably want an LED to display status.... Don't neglect these things in focusing on connectivity; you've still got to wait out a shipping delay.

the easiest way to use http from your internet browser and host everything on local PC or on cloud try this easy way,

Thanks for your help :) new question! Can someone post a picture or a link to how to connect the esp6288 to the arduino? tried lost of stuff I found on the internet but nothing seems to work.. is it only thr VCC that need 3,3 volt or does the digital pins also needs to be at 3,3?

Thanks for your reply! Do I need any resistance anywhere? What pins should we use from the Arduino? Do we need any firmware?

about other thing I really not know,I never use it, wait members to help you

Connect the top two pins (UTXD, GND) and bottom two pins (VCC, URXD) to the RXD, GND, VCC, TXD pins of a microcontroller. Note that VCC must be no more than 3.6V. The middle four pins are should be pulled up to VCC for normal operation.

i found this maybe it will help you 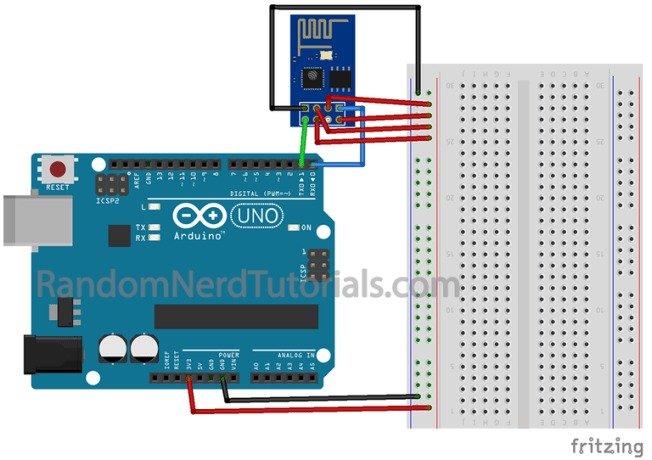 and this article here that's all what I know :P

Does anyone know if we need any resistance between the TX and RX?

Hello, I have a problem! I have a Adruino and a WIFI module esp8266 and I dont know how to make it work. Any tips?

Thx for all help.

All I did was put "Arduino ESP8266" into google and look what popped out.

haha yeah but we don't know how to wire it...nothing works... dont know where to put the resistance and how much we should use.

The link I just posted shows all of that. Look at the second page.

Please do not cross-post. Threads merged.

Nothing work! Read that article again maybe you miss something, post your code, and how you wire your WiFi to arduino