I am interested in communicating with arduino over a telephone line. What is the maximum bytes per second that can be acheived? Is fsk the the fastest or are there other methods? Any example links would be appretiated also.

By "telephone line" do you mean one end is controlled by a phone company? Or do you mean a cable with two or four conductors and you control both ends?

"telephone line", I believe the FCC limits the power you are supposed to put over lines so the max data rate achieved with a modem is 52Kbps.

The 56 kbit/s rate is only possible from the central office to the user site (downlink). In the United States, government regulation limits the maximum power output, resulting in a maximum data rate of 53.3 kbit/s. The uplink (from the user to the central office) still uses V.34 technology at 33.6 kbit/s. 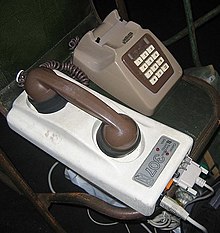 A modulator-demodulator or modem is a computer hardware device that converts data from a digital format into a format suitable for an analog transmission medium such as telephone or radio. A modem transmits data by modulating one or more carrier wave signals to encode digital information, while the receiver demodulates the signal to recreate the original digital information. The goal is to produce a signal that can be transmitted easily and decoded reliably. Modems can be used with almost any mea...

I am interested in communicating with arduino over a telephone line. What is the maximum bytes per second that can be achieved? Is fsk the the fastest or are there other methods? Any example links would be appreciated also.

First obvious thing to state is that an Arduino cannot directly communicate over a telephone line. A device called a modem (for modulator/demodulator) is required at both ends of the phone line. How fast a speed can be attained depends on the method and complexity of the modem. You mentioned FSK, I believe the fastest modem speed that used simple FSK is the old Bell 201 standard running at 1200 baud. The fastest modem I'm aware of is the 56K baud modems, however be aware that such 56K modems had to negotiate with the far modem to establish how fast they could actually work for that specific link at that specific time, so frequently, if not mostly, they linked up at lower speeds.

I have some standalone USRobotics 56K modems with, uh, have to look now, some kind of serial connector on them.
I say standalone because they do not plug into card slot on a motherboard.

You mentioned over a telephone line, so the assumption is that you will be using a modem at either end. Using a V34 modem, the maximum you may achieve is 33.6kbps (bits). If you have poor telepnone lines the modems will auto-negotiate to lower speeds automatically for reliable operation when connecting. Forget about 56k, these modems do not talk 56k to each other. With telephone compaines using more VoIP implementations with compression for voice transmission over the network, you may only get 9600 ;^(

That is on the line (telephone) side.

On the peripheral (user) side you can clock asynchronously as high as 115Kbps. The modem will buffer your data until it can be clocked out. As the the buffer fills ,it will use flow control Xon/Xoff (11/13 hex) to prevent overflowing, or hardware control using CTS (clear to send). So you will have to monitor the Rx output from the modem for these characters or risk having data lost.

You can either program a modem to auto-dial a stored number on raisng DTR (Data Terminal Ready, pin 20 if I recall) or use the AT command set to dial.

The periperal connection is usually an RS232 to db25 connector. RS232 uses a Tx-Rx, Rx-Tx pairing.

Should get you started.