Can anyone please help me to solve problem with compiling of bootloader?
I want to compile slightly edited bootloader for my Arduino Pro Micro (Sparkfun version), but I'm not able to get it to compile. The make put me back message, that the system cannot find the path specified (see screenshoot, it's in czech "Systém nemůže nalézt uvedenou cestu").

I have LUFA folder placed right, I added GnuWin32/bin and avr/bin from arduino tools to path, but I'm still not able to find, what exactly it can't find... 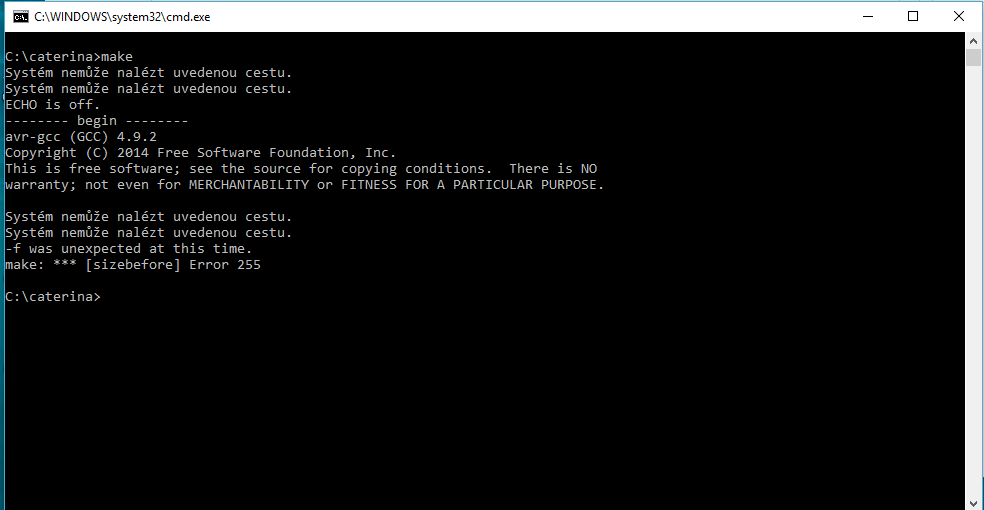 but I'm still not able to find, what exactly it can't find...

See that message that says ECHO OFF? Edit the script that is being run by make (look in the make file, if needed) and stop turning echo off.

Thanks for reply.
I already wanted to do it, but I'm not able to find, where is the echo OFF

I tried to run make with debug option (make -d) and this is what is before the error:

I tried to run cmd and make also as admin...

It was hard, but this is what is inside the temp .bat

EDIT:
after some more searching and testing I found, that problem is, that there is no utils in avr-gcc in Arduino. So the make didn't find sh.exe

But now I have some error with this sh.exe

Finally I got it working!

First I found, that the Arduino avr doesn't contain utils folder (with sh.exe).
So I downloaded winAVR2010. But it gave me some error.
So I downloaded CygWin. Which has sh.exe in default settings. But I found, that it doesn't contain second utility - bc.exe, and I didn't find it in options to install.
So I took the utils folder from WinAVR and copied it to CygWin without overwrite.
Voilá, it works!