New to the Arduino world, but I know someone with one who is willing to help me with a project. My project is going to be a beer pong table that uses IR emitters and detectors to determine whether or not a cup is placed in its location. If the cup is, the LED will light , and if it isn't the LED will turn off - along with other patterns, etc that will come later, right now we just need help understanding the power management side of things. I am planning on using 4 RGB LEDS per cup, (I am assuming I can run those 4 in series/parallel?) to keep things simpler and only therefore will need fewer outputs - a total of 61 for all 20 cups, not including the IR gear?

We were able to get a basic mock up working fairly quickly for one "cup" (4 LEDs and a single emitter/receiver pair) but I understand that the Arduino is not able to power the whole grid, so I am wondering how I could power this externally, or what are my options? I have read about multiplexing and using a TLC5940, but I am reaching out to you guys for suggestions.

Currently I have a bag of 100RGB common anode LEDs, 25 IR pairs and 2 Arduino Megas - I have some electronics background, but now I feel completely lost! Any tips would be appreciated!

The WS2812b or neopixel as it is called is a game changer as regards projects with lots of LEDs go. You can get them individually, on a small PCB, or prewired in flexible strips. It only takes one wire from the Arduino to drive them all.

You can not put a common anode or cathode in seriese. If you put them in parallel each LED needs it's own resistor, so that is three per RGB LED.

Interesting - I just looked it up.

Could you elaborate a little more on that LED? 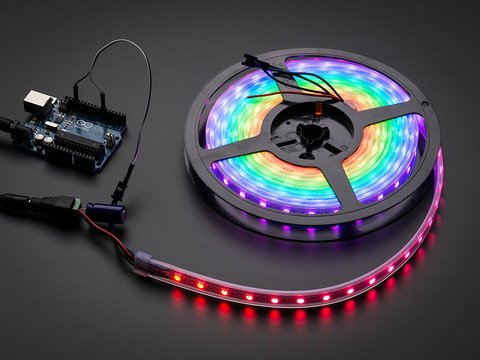 You thought it couldn't get better than our world-famous 32-LED-per-meter Digital LED strip but we will prove you wrong! You wanted twice the LEDs? We got it (well, its 1.875 times as ...

Ok - looks to be a good option, although I would still like to explore others, as using the neopixels would be very expensive for my design.

It is cool that you can cut them anywhere, and resolder them

Well the alternatives involve a lot of wiring and a bit of complexity due to the wiring being spread out.

I would look at the PCA9685 chip to control the LEDs. You can control 16 LED elements (three elements per RGB LED ) per chip and they sit on the I2C bus. The only drawback is that they are surface mound devices although you can get breakout boards.

The old way to do it would be to use the TLC5904, again 16 elements per chip but you can multiplex them. In this project I drive 64 RGB LEDs using only three chips.

Hi, I second the 2812 suggestion. How about these individual ones mounted on tiny boards?

When posting eBay links, remove the question mark and all following.

Thanks for the tip, Grumpy_Paul__B!

Alright guys - you have convinced me. I have some of these on the way!

Now my question is when connecting the +/- 5v, I know I need to keep the ground connected with the arduino ground. From there, can I take all the +5v and run them in parallel, or does each bulb need to be in series with eachother?

From there, can I take all the +5v and run them in parallel,

Mike is right as always, but why would you want to do that? One of the big advantages of these leds is that you can minimise the number of wires. If you connect them in parallel, your circuit becomes a giant spaghetti mess, just like it would with be ordinary rgb leds.

One thing to bear in mind is the relatively large current that 80 of these leds will need. It might be wise to connect the 5V and GND back to the supply at both ends of the "string" so that all the current does not have to flow through a single pair of wires. That advice does not apply to the data line of course!

I thought I was saying just connect the power and ground in parallel. This does not imply a star connection topology, chained will work fine.

jonly:
From there, can I take all the +5v and run them in parallel, or does each bulb need to be in series with each other?

You seem to be getting confused here, or at least not giving a clear indication.

This is a series connection:

This is a parallel connection:

This is how you connect the power rails to the NeoPixels

However it is true that the data to the NeoPixels is "chained" from Dout to Din, one to the next.

There is the matter of where you connect the power to avoid excess resistance in all the connecting wire; for short chains it is not a problem, but if you were using long chains - perhaps 20 or more, you would have to consider feeding power in at the middle, at each end, or every so often along the chain. If it is a rectangular array as you are proposing, then you run power wires along the longer side of the array, and feed each row from these. The data still has to be chained, so you orient the pixels so that the data chain runs in one direction along a row, then comes back from the end in the reverse direction through the next row and so on. Of course, your sketch has to take this sequence into account to address a desired pixel.

Does this make sense, or is there a better way?

Also, I would be using heavier gauge wire between the psu and each cluster 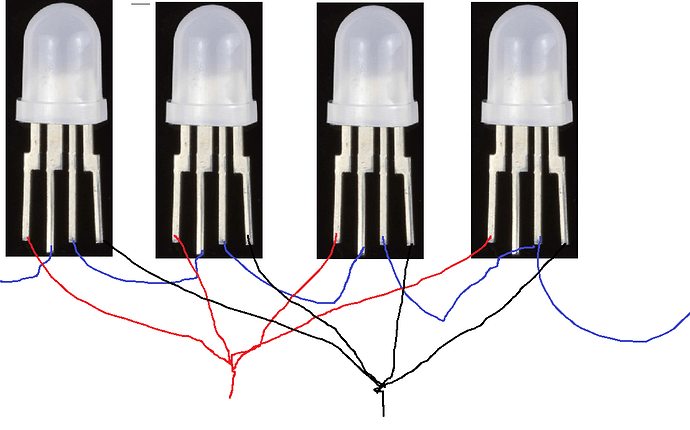 Close, but no cigar!

If only because according to your eBay page and other references, the power connections are the two middle wires.

Thanks for pointing that out - I was just drawing it up to get an idea without actually knowing what the pins were.

Now I know the pinout too!

Other than that, should I be good wiring everything as described? Any recommendations for a 5v power supply?

jonly:
Any recommendations for a 5v power supply?

I have an older computer powersupply I think I can use. My only question now is what is the best way to power the Arduino? 12v through the connector, or make my own cable that supplies 5v through the usb port?

What is the best way to power all of 20 of them at once? I found a website that generated a possible way to do it using 12v, which would work perfect for me since I need 10 per side. What do you guys think?

jonly:
I have an older computer powersupply I think I can use. My only question now is what is the best way to power the Arduino? 12v through the connector, or make my own cable that supplies 5v through the USB port?

One thing you have to bear in mind, is that computer power supplies regulate the 5V output, not the 12V, and that there is a certain minimum load which they expect and may not regulate properly supplying less than an amp or so (and possibly more).

It is not sensible to make up a USB cable to feed 5V to the Arduino - you just connect to the Vcc connection.

jonly:
I also am using these for emitters.
What is the best way to power all of 20 of them at once? I found a website that generated a possible way to do it using 12v, which would work perfect for me since I need 10 per side. What do you guys think?

It is (as so often happens) the most terrible pile of crap.

One ohm resistors? Wait till Mike sees this!

Five in series perhaps, use a larger than necessary resistor (1k) to test what voltage appears across the chain of LEDs, then re-calculate the resistor according to that voltage to the current you want.