The young ladies of asia lost their eyesight making these.

What does the thing in the middle do? Shoot laser beam.

Hi,
I have one of those, just finished knitting the core memory, haven't placed the other components yet. 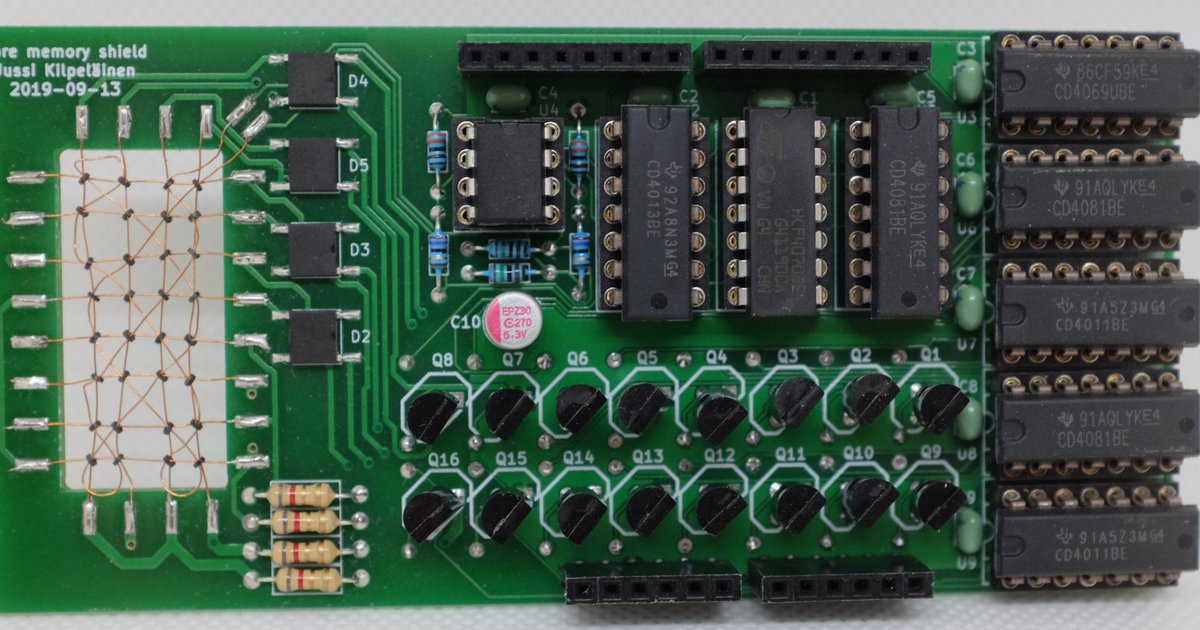 Core Memory Shield for Arduino by Jussi Kilpelainen on Tindie

Magnetic-core memory was the predominant form of random-access computer memory for 20 years between about 1955 and 1975. Such memory is often just called core memory, or, informally, core. Core memory uses toroids (rings) of a hard magnetic material (usually a semi-hard ferrite) as transformer cores, where each wire threaded through the core serves as a transformer winding. Three or four wires pass through each core. Magnetic hysteresis allows each of the cores to "remember", or store a state...

Its what got us to the moon and back.

Start of an interesting quest, to fire up an original LEM guidance computer.

https://en.wikipedia.org/wiki/Magnetic-core_memory:
"For example, the Space Shuttle IBM AP-101B flight computers initially used core memory, which preserved the contents of memory even through the Challenger's disintegration and subsequent plunge into the sea in 1986.[27]"

Just another reason to appreciate this forum - fascinating subjects.

I notice that Arduino pins even with drivers don't run that matrix and wonder why?

If selecting a core changes it, how do you read?

I lack bandwidth and have 2G/mo so no youtube please!

Hi,
This is some of the documentation with the shield;
http://www.corememoryshield.com/report.html

Destructive read. Close timing. I like the part about using 1 wire to read 2 cores.

GoForSmoke:
Destructive read. Close timing. I like the part about using 1 wire to read 2 cores.

Yes, its all down to hardware, electronic and programming efficiency to do a specific job.
Tom..

I wonder if a latch could catch the induced pulse of a changed state? Read with input shift register and BJT?

GoForSmoke:
I wonder if a latch could catch the induced pulse of a changed state? Read with input shift register and BJT?

This is from the documentation about reading sense current.

But if you are making ROM type rope core;
http://qrp.gr/coreROM/