Detecting if spotlights are removed from 4wd.

I'm having problems with local hoodlums nicking the spotties of my 4wd.
Given no car alarm has a feature to monitor if my spotties are still electrically connected I thought I would build my own with an arduino in the center.

So the alarm part is simple, but I am a little stumped on the best way to check the spotties are still part of the circuit; as a simple continuity test would expose the arduino pins to the 12v battery power when the lights are turned on.

So I need to test if a circuit is closed, the circuit may or may not be carrying power, and of course the test can not interfere with the car electronics in any way.

cheers for any ideas,

as a simple continuity test would expose the arduino pins to the 12v battery power when the lights are turned on.

A small signal diode might protect an arduino output pin from being back fed from the 12v source.

I'd run a wire from an Arduino pin to the lights and back to the Arduino ground doing nothing more than making a complete circuit. Make it only look like it's part of the light's wiring. It will basically act like a closed switch which they will open when cutting the wires or unplugging the lights. That way you avoid your light's wiring entirely.

I was thinking about wiring a large value R [maybe 100K-220K] from the 12V battery to the lamp, so
bypassing the normal switch. This will run a tiny tiny current through the lamp constantly. Then monitor
the voltage across the lamp using an Arduino pin [digital or A/D works], using a 12:5 [or better 15:5]
voltage divider, eg 100K:33K.

Zoomcat already suggested using a diode to prevent the Arduino being back-fed by the lamp when it was turned on. All you need is a digital input with a pullup resistor which is connected to the spotlamp +ve via a diode so that the lamp acts as a pull-down resistor. Presumably your Arduino is going to drive some sort of alarm output which suggests you may be wiring an output through a transistor. If you're up for that sort of thing, I expect you could actually eliminate the Arduino entirely and use your pull-down circuit to turn on a transistor directly.

As Peter says, you dont actually need an Arduino here, something like below ( but with a power FET instead of a transistor) would work 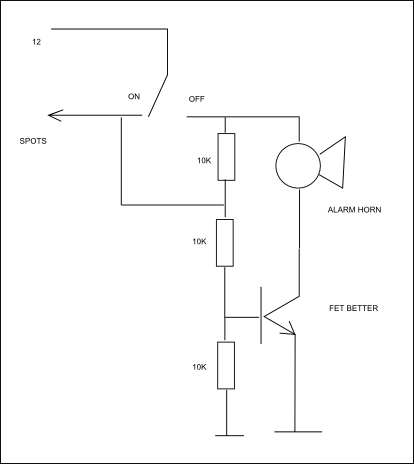 The arduino may seem like over-kill but the system also needs logic like:
-turn off after 30 seconds so as not to drain the battery or annoy the neighborhood after the spotties are long gone.
-keep alarm going for 30 seconds if spotttie is immediately plugged in.
And besides, once I wire in an arduino, I have a platform ready for other car related projects.

I appreciate the diagram heaps boffin1; I am starting to get an idea of how to approach the problem now. For some reason I hit a massive mental blank approaching this problem and this stream of ideas has cleared that, so again thanks