Hello,
I’m looking to get an Ethernet shield…but I’m trying to tell. Is there some difference in some of these?

Just looking at the photos…there appears to be a chip on the back of one that is not on the other. I realise they may have changed the design, or someones using an older photo…but the price difference is my other factor.
thanks for any advice 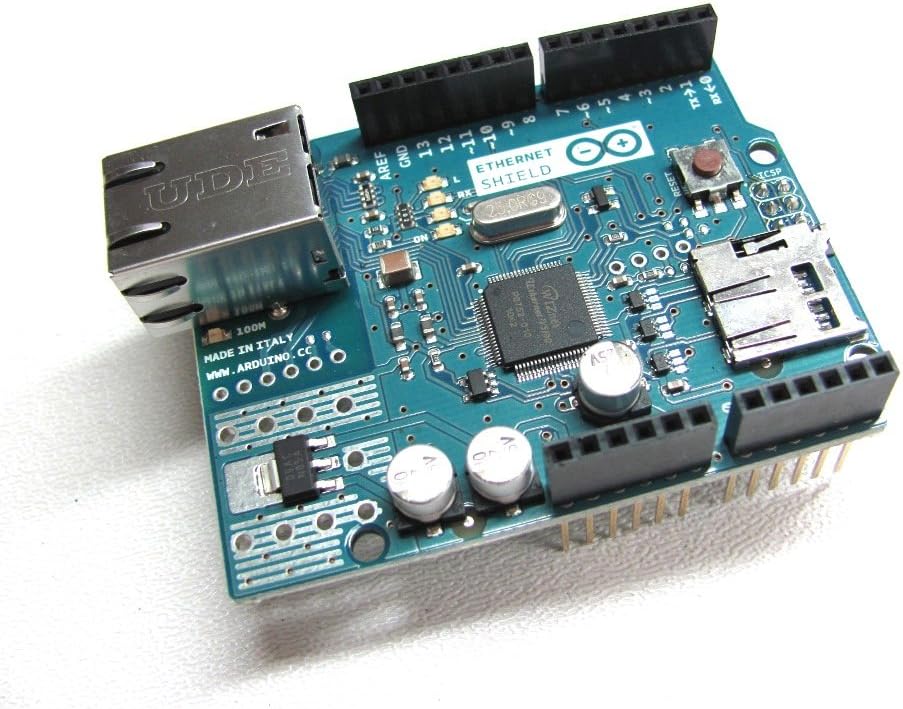 The Arduino Ethernet shield R2 allows an Arduino board to connect to a LAN using the Ethernet library. New version with micro-SD socket, reset switch and compatible with Arduino MEGA.

Difference is the one pictured at Makershed has the optional SD card slot shown on it but its not supported or induced on the one you would get from ordering threw them. The amazon one seams to be the same thing but pictures the correct item as you would receive it.

So does the makershed one has an incorrect photo?
i.e. If you order one of each you would get two ethernet sheilds that look/are exactly the same?

so…ok…maker shed has a picture of something that is incorrect and not what you will receive. Which means I can save $10 and get the other one. Are these things made by the same people? I just want don’t want to get one and find out that I bought something that won’t do what I might read about it doing from other peoples projects.

There are two types of Ethernet shield, each made my various manufacturers in their own ‘flavours’. The two type are the ones based on the Wiznet 5100 chip, which is the officially supported one and the cheaper type based on the ENC28J60 chip. Both of the posters links appear to be the Official Wiznet type but by different manufacturers. I have a Wiznet type that looks like neither by a different maker.

The ENC28J60 type is also made by various manufacturers, this being a typical example : http://www.nuelectronics.com/estore/?p=12

The Wiznet type is the one to go for (unless you want the cheapest possible solution) as its easier to program, better supported and is less hard on the arduino’s resources than the ENC28J60.

All the Wiznet based boards are compatible with the library included in the IDE, the ENC28J60 type need a diffent library which needs to be seperately installed.

Sorry if this Hijacks your thread but also how hard is it to add the SD slot to the wiznet sheilds? Does just need the slot soldered on or are there more componants needed.

It doesn’t work if you do by all accounts, something to do with the SPI interface it uses conflicting with the Ethernet’s SPI.

no more components. But the wiznetchip for ethernet has some kind of bug, which disturbs the sdcard, which shares the SPIpins with it

But thanks…that helps make sense. I don’t want to go to the cheapest option…I just wanted to get a better understanding. Part of the difficulty is understanding who is making all these components (because the people selling don’t always explain) and what the differences in them are. I just want to get the bang for my buck…you know. Thanks for all the help…now to place my order!