I've read a dozen or so requests for help with servos, and I think this problem is a bit different. But someone made the comment on one of those threads that calls to Serial will cause problems, and I wonder if that's part of what I'm seeing. I've attached a Sparkfun TFMini to the horns of a Futaba S3003 servo. I'm only using one motor. I'm trying to make a poor-man's LIDAR system, with a +50º to -50º, slow, smooth sweep. What I'm getting is a smooth sweep about 80% of the time, and jerky, twitchy behavior 20% of the time.

So, center the servo, reposition to -50, sweep back and forth from -50 to +50 ten times, repeat. Along the way, take readings with the TFMini.

Based on other recommendations, I have the servo on its own +5.3V 8A (measured) max power supply with grounds connected (actually, the motion is smoother with just my Ruggeduino, but the power drops too much, of course.) I have a 470µf capacitor right before the leads for the motor. I've tried various other suggestions to 'detach' after and 'reattach' before moving the servo; alter the servo pin to input after and back to output before moving; various changes to the step distance and timing; and making sure I'm not taking readings from the TFMini (software serial) or to the serial monitor during the moves (Serial). As far as I can tell, Futaba servos are considered pretty good - I don't think that's the issue. The servo runs the sweep example code smoothly, but a bigger range than I want and much faster than I want.

My suspicion is that the various serial calls are all asynchronous, and what's happening is that they're stealing the interrupt and screwing up the signal to the servo. That, I think, is what someone else meant when they said calls to Serial might be a problem. (Like, here.)

What I can't seem to find is some explanation of exactly what's going on for one of these calls to position the servo, and what could go wrong with that.

I think the next thing to try is disabling interrupts while moving the motor. At least, I think that's what adding "TIMSK0=0;" in setup would be doing. Any thoughts? 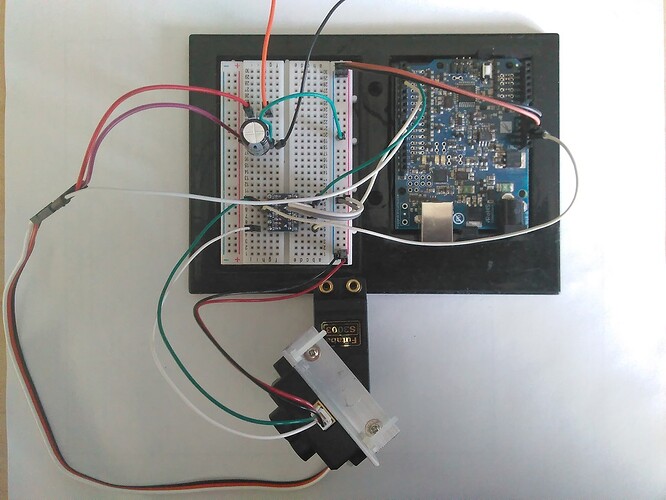 I would think that a sweep would be smoother if you made more moves with a smaller delay between them e.g. increment/decrement by 1 and reduce delay to 70. No idea if that will help with the twitching though.

I bet your 2 libraries, Servo.h and SoftwareSerial.h, are in conflict over the timer.
You might try Servo2.h instead.

Steve, I spent yesterday changing that code from a step of one with delay of 20ms, to step of two with 40ms, to step of 5 with 100ms, to step of 10 with 200ms, and then back to step of three at delay of 60. I bumped up the delay to 200 at the end, to see if spacing that code farther from the Serial and software serial would help. The jitter problems happened at all of those steps and delays. Usually it would run fine for the first sweep or two (or three, or four), then would get partway through a sweep and stutter - stop in the middle of moving, jump about 15 degrees, seem to recover, with about half the time smoothing back out, and half the time doing a whole series of stutter stops like that, until finally smoothing back out again for a while. Seems fairly random as far as I can tell so far.

Vince - there's a servo2? I'll go digging for that and try it out. Is there some kind of tell-tale sign I could look for in debugging these things to decide if it's an interrupt issue? There were occasional checksum errors on the TFMini responses, though I didn't think they correlated with the stutters - maybe I wasn't watching closely enough. I thought about commenting out all of the Serial calls, but if it's software serial causing the problem I can't do that as easily - though I could as a test. But using another servo library might be performing the same test, the other way around. I'll give it a shot, thanks!

I'm not sure about Servo2.h...to me it looks pretty much identical to the original Servo.h.

But you could definitely try ServoTimer2.h which avoids using Timer1 where most of those clashes arise.

Update. I tried ServoTimer2.h, and it was a disaster. Tremendous conflicts between the the servo and software serial. The sensor was reporting communication errors left and right, and the servo either didn't move at all or jumped with huge jerky movements. I haven't given up on that, but moved back to the regular servo call for more testing.

Another thing I tried was using a variable power supply for the servo. I was driving it with my Ruggeduino, with a voltage drop that didn't hurt anything, but not pleasant. Then I switched to a good 5V switched supply with connected grounds. That actually made things worse for the servo, but was needed for the Arduino anyway.

So, with the variable supply, the servo was much smoother at 4.5V. Still had problems, but not so bad. When connected to the Arduino 5V supply, voltage dropped to 4.8V, which made me wonder about voltage going into the motor. 4.8V not so bad, 5.3V (from power supply) worse, so what voltage is this thing happy at? Below 4.0, it didn't do anything at all. Above 4.5, the jerkiness in the servo increased.

I bought two of these servo motors. When I get the chance, I'm going to try the other one, to see if there's some difference. I suppose while I'm at it, I should try the servo driven by one Arduino, and the sensor connected to another, to better isolate the problems.

When connected to the Arduino 5V supply, voltage dropped to 4.8V, which made me wonder about voltage going into the motor.

That is your problem.

NEVER power servos or motors from the Arduino power supply OR the 5V output. They inject noise, overload the voltage regulator and can actually destroy the Arduino.

Always use a separate power supply and connect the grounds. 4xAA batteries will work fine for one servo.

Um, actually, that power had nothing to do with it. As I said in the previous reply, that was a separate supply, then dropped through a variable power supply. The servo is powered completely separately, with only the grounds connected, as everyone recommends. You were reading a note about an early experiment.

The problem here is the code for the TFMini, I think. It's a very early test bit of code, looks like, and it's sitting on a software serial read for as long as it takes to get a reply. That doesn't seem like too long, but I'm thinking it's long enough.

So it occurred to me that if I switch to a Mega, I should be able to make the problem completely go away (4 hardware UARTS). Sure enough, on the Mega the problem is gone - if I use a hardware UART. As noted before, in both cases the servo is on separate supply, with connected grounds. So, let's compare:

So, in this case, the problem has very little to do with the servo or Arduino, and mostly just a not-for-production set of test code for a fairly new LIDAR (lite) sensor, I think.