I purchased a $20 digital body scale with the hopes of hacking it to obtain (via an Arduino Uno) the load values (need weights up to 330lb which is what the original scale capacity was) as well as reduce the surface area of the weighing slab to about 2x2 inches. I believe I know what to do once I get this thing wired to my Uno but I cracked this thing open and I was a little perplexed by the wiring and now don't know how to move forward. Images attached show the PCB (front and back). 3V (red wire) and ground (black wire) are going to the upper left part of the board which powers the whole thing. Each strain gauge (4 in each corner of the scale) has three wires (red, black, and white). Each red wire (from each strain gauge) goes to one of E+,E-,S+, or S- on the board (top right). 2 black wires (from 2 strain gauges) are paired up and soldered to the board at the very top, next to 2 white wires paired up (labeled B/B, and this repeats again across the top (labeled W/W).

I'm a programmer at heart and am now trying to learn about sensors and hardware while also pursuing some prototyping ideas. I've actually researched this project a ton and have found some great content, but most of the results points to wheatstone bridges where there's a load cell with 4 wires. I'm uncertain how to hook all of these strain gauges into the Arduino without knowing anything about the PCB. I have a INA125 on the way for the amplification (INA125 data sheet, product information and support | TI.com) and also a multimeter, but any help in how I should actually wire it up to the Arduino would be incredible.
Any help at all would be greatly, greatly appreciated! I also plan to make a tutorial on how I did this for others to use once I get it working. Thanks a bunch! 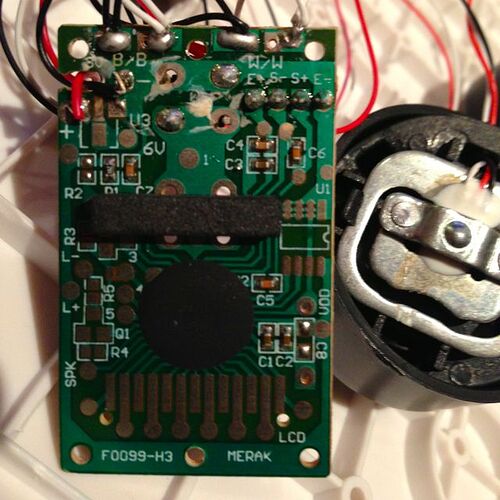 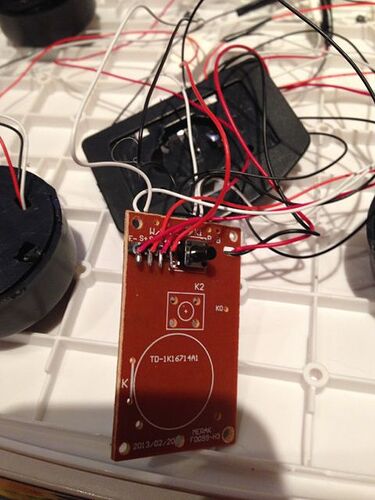 Measure the voltages on the strain guage wires when the device is powered up - then
you'll see which are supply and which are bridge outputs.

OK, well it is pretty clear this is in fact, a bridge arrangement, where "E+" and "E-" are the "excitation" terminals (E+ is controlled by the IC in order not to waste power while the device is sleeping - what trigger turns it on?) and "S+" and "S-" are the "sense" terminals.

I am tying to get my head around it - can you please describe which blacks and whites are connected together in relation to the four red wires?

Ok, that makes perfect sense now, it is indeed a bridge, when you put pressure on the sensors either all the reds come closer in resistance to all the blacks than the whites, or vice versa and that moves one "sense" wire positive and the other negative.

It is going to be pretty difficult to obtain data in a useful from from the COB chip, and it controls the excitation to the bridge so I suppose you will actually have to use only the strain sensors and simply connect the red wires to the Arduino with "E+" going to Aref, "E-" to ground and "S+" and "S-" going to two analog inputs. It goes without saying you will have to calibrate it yourself so there is no real point measuring the voltages in the present device.

Thanks for the various feedback. My INA125 comes in a few days so I still can't do much.

I apologize again for being stupid but what should I do with the 2 white and 2 black pairs of wires once I take them off the board? Should they go into the Arduino somewhere?

Here's what I know I need to do:

Thanks again for the help.

Thanks for the help thus far. I've encountered a new issue (?). I've successfully tested the load cell with a multimeter to verify increasing load increases millivolts slightly (starts at 0.7 mV and can get it to like 4.0 mV). I've hooked it up (I think) to the Arduino with guidance from everywhere (http://www.instructables.com/id/Arduino-Load-Cell-Scale/step2/The-Amplifier/, Liquid Filling Machine – Liquid Filler Part 2 – Hardware To Software, Making a scale for Arduino with INA125, etc.) but seem to be having a lot of trouble with the calibration.

To explain the picture a bit, the four red wire coming from the top go into the load cell and from left to right are E+, E-, S-, and S+. The yellow wire on the bottom and the green wire are what I've been testing with the multimeter. Basically I can't get any other reading out of them other than ~74mV regardless of what resistor I put across the Rg pins (8 and 9). In this setup I have nothing but I've used 1k, 10k, 220 resistors and they all produce ~74mV when testing.

What am I doing wrong here? 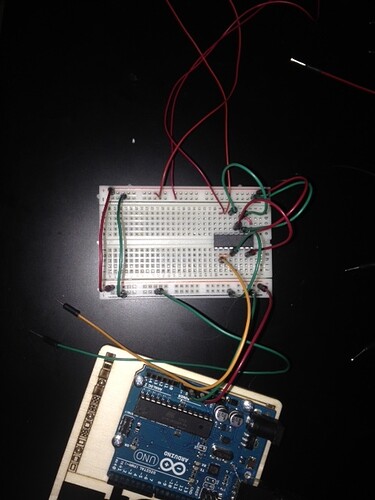