So I've been a programmer for quite some time, but really only just started dabbling in electronics, so bear with me if my question is stupid. I've done quite some research, and I think I have the correct layout for my project. 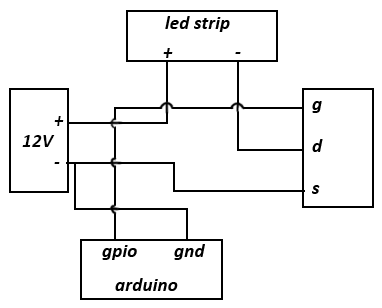 Yeah I still need to learn how to make proper schematics... Anyway this is how I'm planning to wire everything up. Really just looking for confirmation that the design is correct, since this is my first ever project.

From what I've seen, there should be some resistors somewhere? I just can't seem to figure out where, and why they should be there. So if anyone could help with an explanation on that, that would be amazing.

That link describes the purpose of the resistors. You can leave-out the diode since you have a non-inductive load.

The two most important things are:

So I've been a programmer for quite some time, but really only just started dabbling in electronics

I don't know the allowed current for Your LED strip but I strongly think You need current limiting resistors betwen led-strip - and the transistor d.
Value ought to be ( 12 - led-strip forward voltage ) divided by the desired current. Most likely You don't att all need to use maximum current. Current measured in Apms, 0,0xx, where xx is milliAmps.
You might need a resistor between controller pin gpio and transistor g. That depends on the type of transistor.

Thank you for the answer! Knew there were probably some things I was missing. Will look into the links you've given me, thanks