i am making an electromagnetic instrument, - basically a harp with 12 ebows on 36 strings. the ebows drive the strings, and are triggered with an arduino.

i have worked everything out, but i really want to add a neat feature to the device. i would like to add an amber LED to each ebow, which brightness is controlled by the volume of the input signals coil.

here is the schematic i based my ebows on::

so, when a string is vibrating - the signal of the pick-up coil controls the brightness of the led.

can the LM386 drive a single LED by default? how would i implement this into the circuit? whats the most simple way to do this?

thanks!!
all the best
úlfur

That should work. An LED is only going to need something like 50mW.

You'll need to make sure you are driving the 386 hard-enough to get the maximum voltage out of it. (There is no level/gain control in your schematic.)

Since the output is capacitively-coupled AC, your peak voltage will be slightly less than half of the power supply to the 386. And since an LED only lights-up during 1/2 of the AC cycle, you'll need to give it more current (than you would with DC) or accept less-brightness.

I'm thinking you'll need a series resistor of around 100 ohms (but, do you own calculations & experiments). And check the peak reverse voltage for the LED. It's probably a good idea to put a reversed diode (or a reversed LED) across the LED to protect it from reverse voltage during the negative-half of the AC voltage swing.

i am still a novice at electronics.. but - does this make any sense?

any help would be greatly appreciated!
thanks

@dataplex I'm developing an idea similar to your project but with radio frequencies and a guitar. I'm wondering if I could pick your brain about what your final schematic ended up looking like.

I'm basing my project off the same schematic as you and have ordered a 8ohm(driver) and 32ohm (sensor) transducer. I would like something like 50ohm to go along with Ivan Kuznetzov build but the next nighest transducer I found was 100ohm.

Any pointers would help!

Here is audio of a very brute and very analog version of my project: Stream 2N_N3 by Martín Rodríguez | Listen online for free on SoundCloud. (in this version all the audio fx are manually manipulated)

It would help if you would draw all your parts to the standard. Is that an NPN, PNP, etc? How is it connected?

Are those rectangles with a black line next to them meant to be coils?

I prefer resistors drawn as symbols rather than featureless rectangles. Remember, a schematic is supposed to be about readability and ease of analysis, or we'd all just post pictorials. 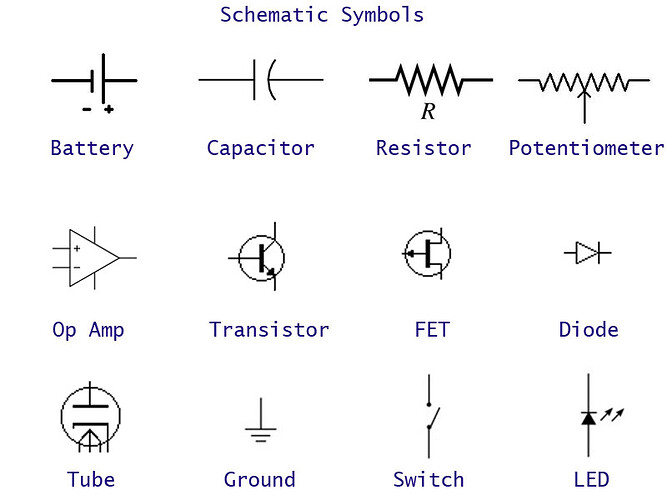