Hi everyone,
I am currently a college student and am working on some neat projects to improve my dorm room. Currently I am working on a multi touch screen, and a home automation system to control the lights, tv, radio etc. from my iPod touch.

What I am wondering is what other ideas do people have that they think would be doable DIY projects to make my dorm room awesome and high tech.
Any ideas are appreciated.
Thanks!

A quick peruse through the Exhibit forum turned up some ideas.
http://www.arduino.cc/cgi-bin/yabb2/YaBB.pl?board=projects

Well the most needed automatable item for a dorm room i can come up with, thinking (way) back to my own boarding school days is a heavy duty ventilation system

what about the arduino 'knock' based door lock I saw on here a while back.... you could play hogwarts...

How about a way to visually depict the amount of beer ugh, soda... in your mini fridge. So you will know without opening the door whether or not you need to send someone of age to the store.

This was a really cool project I thought and is on my want to do list.

Basically you chose what music your system is playing by placing coasters over an RFID sensor. To me its the essence of physical computing.

Are you going in an X10 direction? 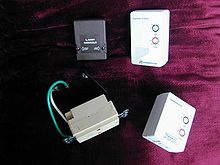 X10 is a protocol for communication among electronic devices used for home automation (domotics). It primarily uses power line wiring for signaling and control, where the signals involve brief radio frequency bursts representing digital information. A wireless radio-based protocol transport is also defined. X10 was developed in 1975 by Pico Electronics of Glenrothes, Scotland, in order to allow remote control of home devices and appliances. It was the first general purpose domotic network techno...

Can we come over to sample the beer from your automated cooler when it's all finished? (scratch that, these things always end up a never-ending WIP).

Some good ideas thanks guys.
And yes flywaresoft I am planning on using x10.
Any other neat ideas?
Thanks

Ooh, what about a Lunar rover?